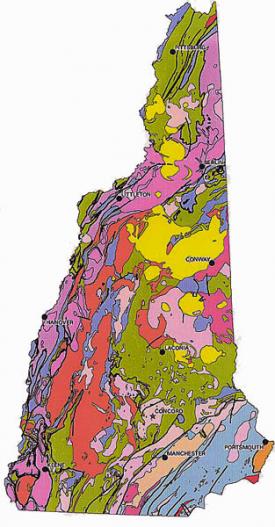 Yellow blobs show upwelling of magma during the break up of Pangea, possibly a rifting area. One is associated with the volcanic ring dike of Ossipee.
Add comment

During the time of the dinosaurs, magma rose to the surface, as Pangea started to break up, forming the Atlantic Ocean, http://www.nhgeology.org/jurassic.htm.   The rising magma formed volcanoes in places in New Hampshire, including the great ring dike that is the Osispee Mountains.  Basalt forms at the surface.  Granite forms underneath other rock layers taking longer to cool so crystals can form.  Granite at the surface means other rock like basalt which cooled quickly has eroded.

The isolated and undeveloped mass of the Ossipee range is the largest and least disturbed wildlife habitat in the region. The range is 9 miles in diameter, its tallest summit rising to an elevation of 2,975 feet and its viewsheds embracing Winnipesaukee, the Belknaps, Monadnock, Kearsarge, Red Hill, and the Sandwich and Presidential ranges of the White Mountains. The Ossipees consist of a circular land mass of more than 40,000 acres, accessed by only three interior roads, none of which bisect the area. There are 25 named mountains, including Turtle Mountain which shows features of the columnar basalt jointing and Bald Mountain, where part way up the trail many columns can be found.  16 named brooks originate in the Ossipees, including Shannon Brook. The Ossipees feed the watersheds of Lake Winnipesaukee (and thus the Merrimack), the Bearcamp River, and Ossipee Lake, which in turn flows
into the Ossipee river system.

As a part of its conservation work within the Ossipees, the Trust has commissioned a series of scientific bioinventories which serve to underscore the uniqueness of this natural treasure which contains one of the best examples of a volcanic ring dike. 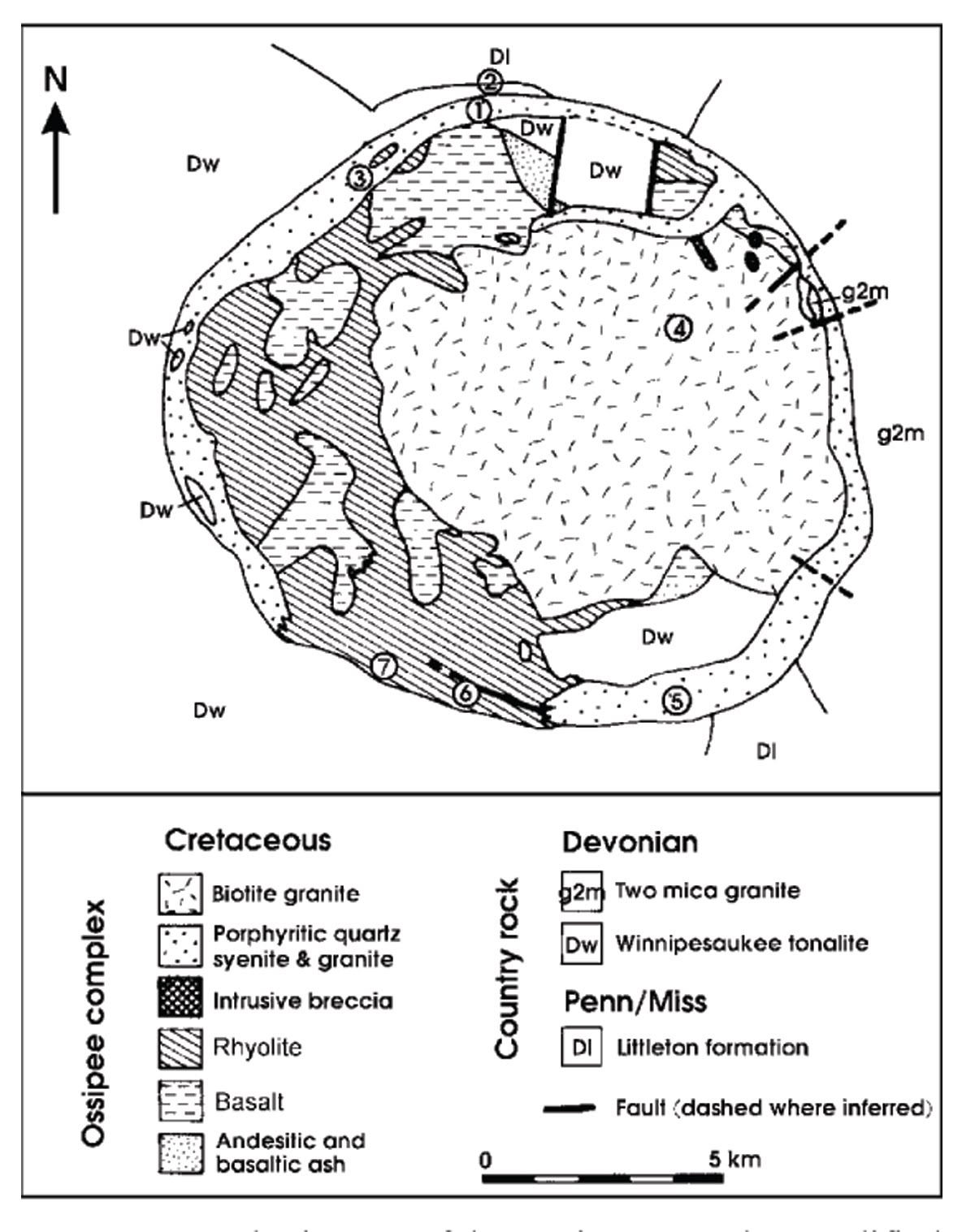 This is a bedrock geologic map of the Ossipee volcanic ring dike. Notice where the basalt is formed, around the granite, in a partial ring, http://whitemountainsojourn.blogspot.com/2010/05/moat-mountain-moat-volcanics-look-at.html. Granite forms 3 to 5 miles below the surface, that means all of the existing granite outcrops on the surface today, whether on an exposed mountain top or in a road cut, used to be that far below the surface, http://www.nhgeology.org/jurassic.htm
Add comment 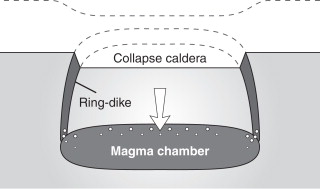 "It is one of the few places in the world that offers access to the guts of a volcano," said Stanley Willams.

Three dimensional topo map of the ring dike in Ossipee 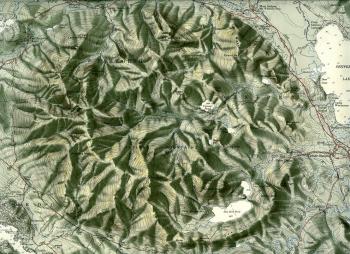 Map showing Ossipee ring dike as well as the Belknap dike below; half of this circular feature is now under water, but you can see islands that are part of the rim 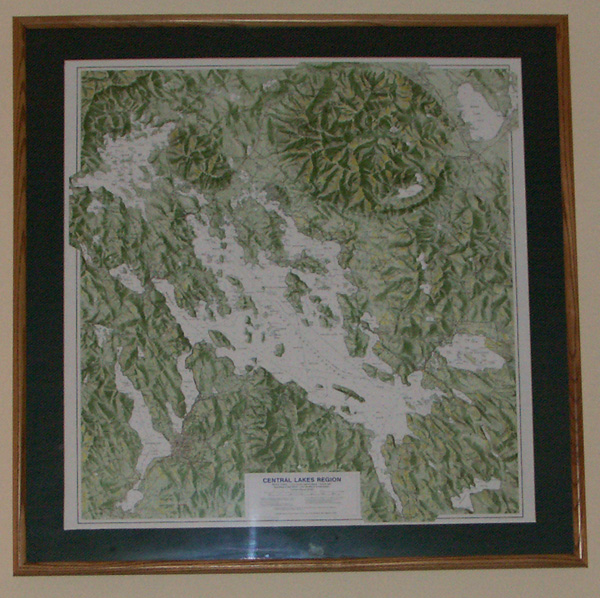 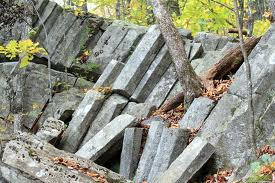 Columnar basalt formations on the way up Bald Mountain in the Ossippee N.H. range 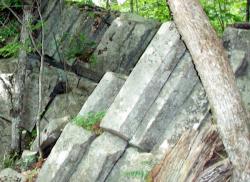 The formation is found part way up the Bald Knob Connector Trail off the Shannon Brook Carriage Road, found in the Lake Region Conservation Trust's Castle in the Clouds network in the Ossipee Range.
Add comment

Mudcracks form when muddy sediment is exposed to the atmosphere and dries up. They have a characteristic polygonal shape when viewed from above, http://www.umt.edu/geosciences/faculty/hendrix/g100/L6B.html. How is this process similar for cooling basalt?
Add comment

Castle in the Clouds Conservation Area 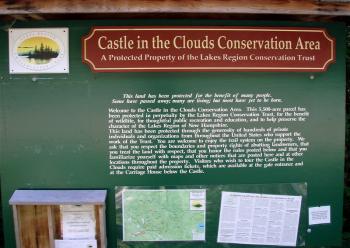 Castle in the Clouds Conservation Area Information and History

The 5,381-acre Castle in the Clouds Conservation Area, located in Moultonborough and Tuftonboro, was acquired by the Lakes Region Conservation Trust in 2002 and encompasses over 28 miles of hiking trails stewarded by dedicated LRCT volunteers. 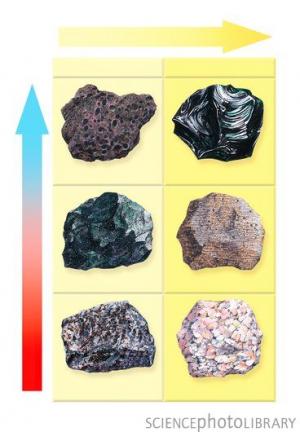 This table shows different extrusive (volcanic) igneous rocks. Left, from top: scoria, basalt, gabbro. Right, from top: obsidian, rhyolite, granite. Extrusive igneous rocks form when molten rock (magma) is cooled outside the ground, either in the air or underwater. Each rock's properties depend on how fast it cools and how much silica is present. The faster it cools, the finer the grains within the rock. Here the left arrow shows the speed of cooling (size of grain), where red is slow (coarse grained) and blue is fast (fine grained). The top arrow shows increasing silica content from left (mafic) to right (felsic). Credit: Gary Hinck/Science Photo Library, http://www.sciencephoto.com/media/88178/enlarge
Add comment

Contrast between granite and basalt 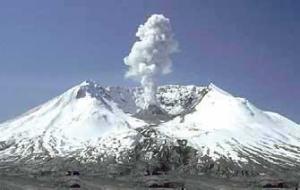 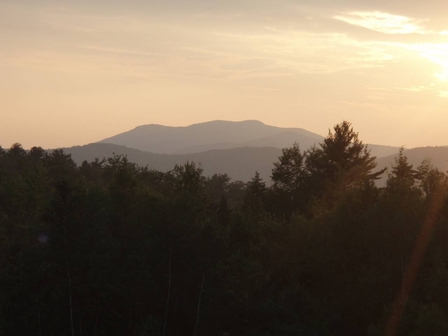 The following passage offers a good description of the Ossipee Ring Dike: "One hundred million years ago, the area of today's Ossipee Mountains was a very different place. What appear to be individual peaks are actually what is left of a large, now extinct volcano. It is thought that the volcano may have been as high as 10,000 feet, and would have looked something like Mt. Vesuvius or Mt. Fuji. Three major eruptions, each about ten million years apart, changed the volcano into what is seen today. The second eruption, around 90 million years ago, created the famous ring dike.

Before any discussion can take place, it would be useful to define some of the terms related to volcanoes and to geography in general. Some of these terms are:

Formation of the Ossipee Ring Dike

Viewed from above, the Ossipee Mountain range appears as a nearly perfect circle, with the area in the center being relatively flat. The Ossipee Mountains that are seen today are really the subsurface remains of the old magma chamber that has become exposed over the years, and the flat area in the center is the bottom of the old caldera. The diameter of the range is ten miles and the distance around the base is forty miles. The original volcano was thought to be around 10,000 feet tall, and the highest peak, Mt. Shaw, is today around 3,200 feet.

One hundred million years ago, there was a fracture in the volcano and an eruption occurred forcing molten magma to the surface. As the magma emerged, circular sections collapsed into the empty magma chamber. The molten magma cooled forming the type of igneous rock called Conway granite. This type of granite is found in New Hampshire's Carroll and Belknap counties. This granite and other volcanic rock subsided and later, deeper magma would push through earlier fractures during the second major eruption.

The second eruption took place around ten million years after the first eruption. Magma was forced up along the edges of the earlier plug, ringing the plug with more eruptions. Dikes of molten magma intruded the earlier Conway granite, and formed the ring-dike that is seen today. This ring-dike is famous with geologists world-wide due to its almost perfect completeness.

Evidence of the early volcanic activity of the Ossipee Mountain area can be found throughout. Connor Pond and Dan Hole Pond, two deep water ponds found in Ossipee, NH, are the remains of what had been gas vents on the early volcano. Remains of the ring-dike can be easily seen in an area called Cold Brook in South Tamworth, NH. The New Hampshire Geological Society has set up an excellent field trip for anyone interested in the ring-dike or in the unique geology of this very special area of New Hampshire,"

The Pawtuckawy volcanic ring dike is farther south in New Hampshire than the Ossipee dike. The former is smaller as well.  There are trails on the "back side" which don't require entering the State Park. The Tower trail, Soundboard, or Boulder trail are possibilities.  There are cemetaries, old foundations, and caves to explore.

Another ring dike in New Hampshire 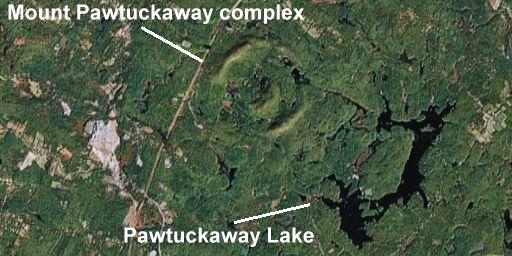