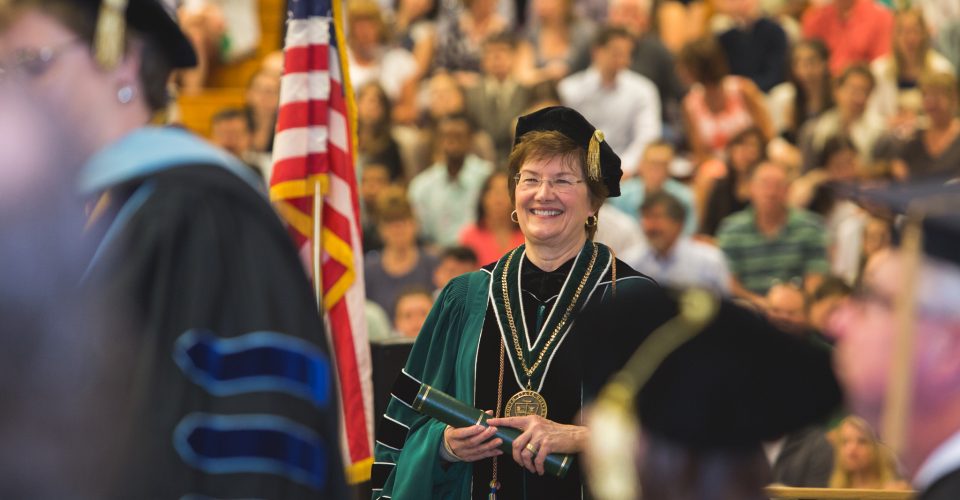 Every college commencement features familiar elements; graduates receive their degrees, speakers try to impart sage wisdom, and proud families and friends congratulate their loved one on their accomplishment. But PSU’s 144th Commencement was bittersweet, as it marked the final such ceremony of President Sara Jayne Steen’s nine-year tenure.

“This is my final commencement as your president, which makes me a part of the Class of 2015,” she said to the delight of the graduates, who cheered and applauded. “It is wonderful to share this moment with you, the PSU family.”

President Steen’s remarks were followed by words of wisdom from two distinguished alumni speakers. Honorary Doctorate of Business degree recipient John Garnsey ’73 recalled how he took a chance to work at a Colorado ski area and ultimately became the president for global mountain development with Vail Resorts. His mantra? “Follow your passion, wherever it takes you,” exhorted Garnsey. “Be it Wall Street, the classroom, or in the mountains like myself—it will certainly increase your chances for lifelong success and happiness.”

Commencement speaker and Granite State Award recipient Rick Brenner ’93, president of the New Hampshire Fisher Cats minor league baseball team, delivered the commencement address, advising graduates the key to success and happiness isn’t about acquiring material wealth. “Whatever your calling is, it will be much easier to achieve your goals if you set them based on who you need to be not what you want to have,” Brenner said. “Who you need to be defines your path, your interim goals, and ultimately, your road map. It starts with who you are, not what you do or what you want. It is what is in your heart, your passion that will create your success.”

In an especially poignant moment, Diane and John Foley of Rochester, NH, accepted a posthumous honorary Doctor of Humane Letters degree in memory of their son, journalist and New Hampshire native James Foley. James was the grandson of one of the Plymouth State’s most beloved athletic directors and academic leaders, John C. Foley, for whom PSU’s basketball gymnasium is named. President Steen presented the award, noting, “Plymouth State University stands in awe of James Foley’s bravery, his commitment to freedom, and his personal sacrifice.”

Speaking on behalf of his family, John Foley made a heartfelt request to the Class of 2015, asking them to continue his son’s legacy. “I believe Jim’s message today would be to take courage, stand up for what is right, help and encourage those in need, and be grateful for the gifts we receive,” Foley said. “Graduates, this world needs you desperately—please accept Jim’s challenge.” 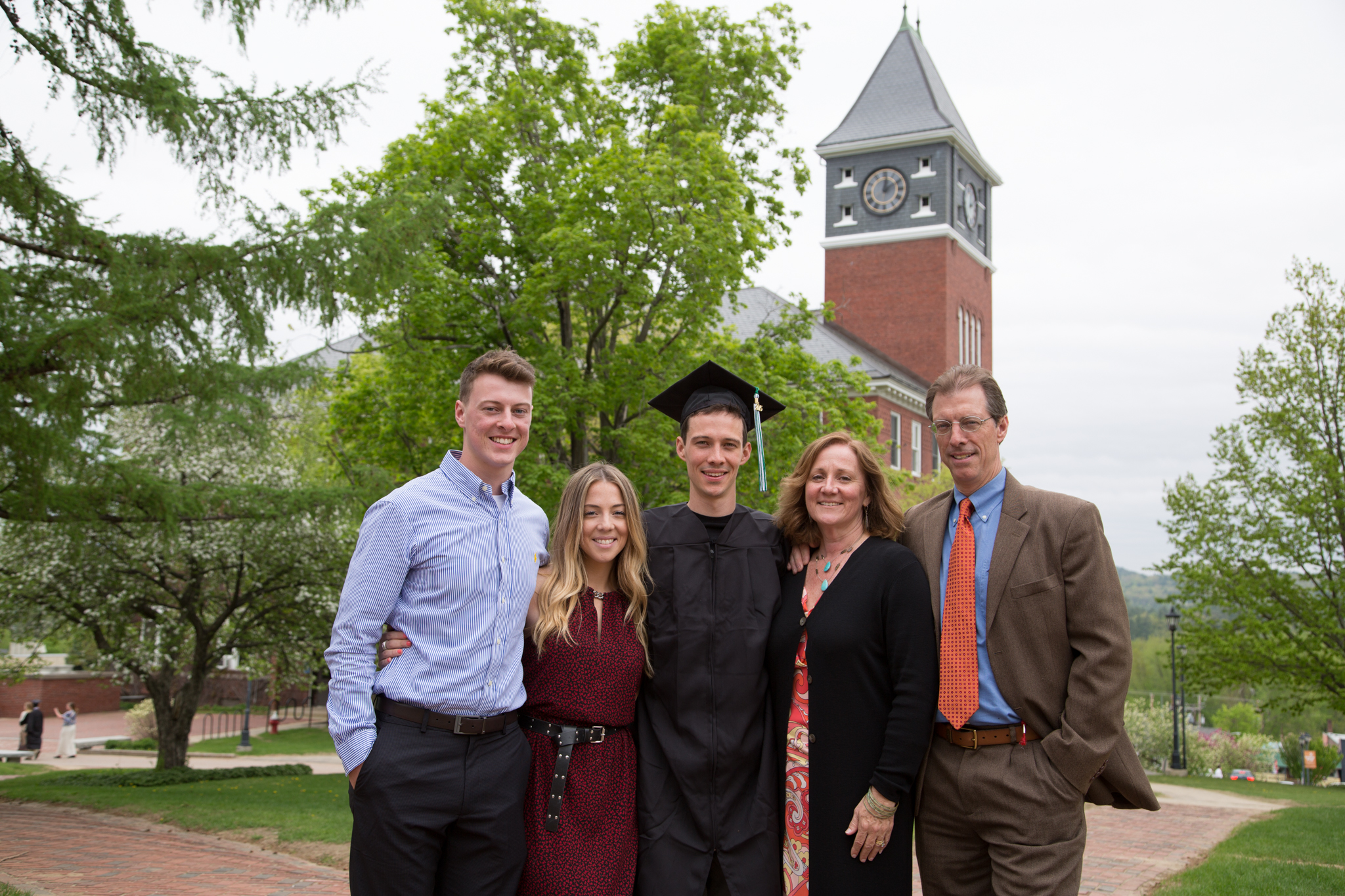 A jubilant graduate and his family pose in front of iconic Rounds Tower. Kaleb Hart ’11 photo. 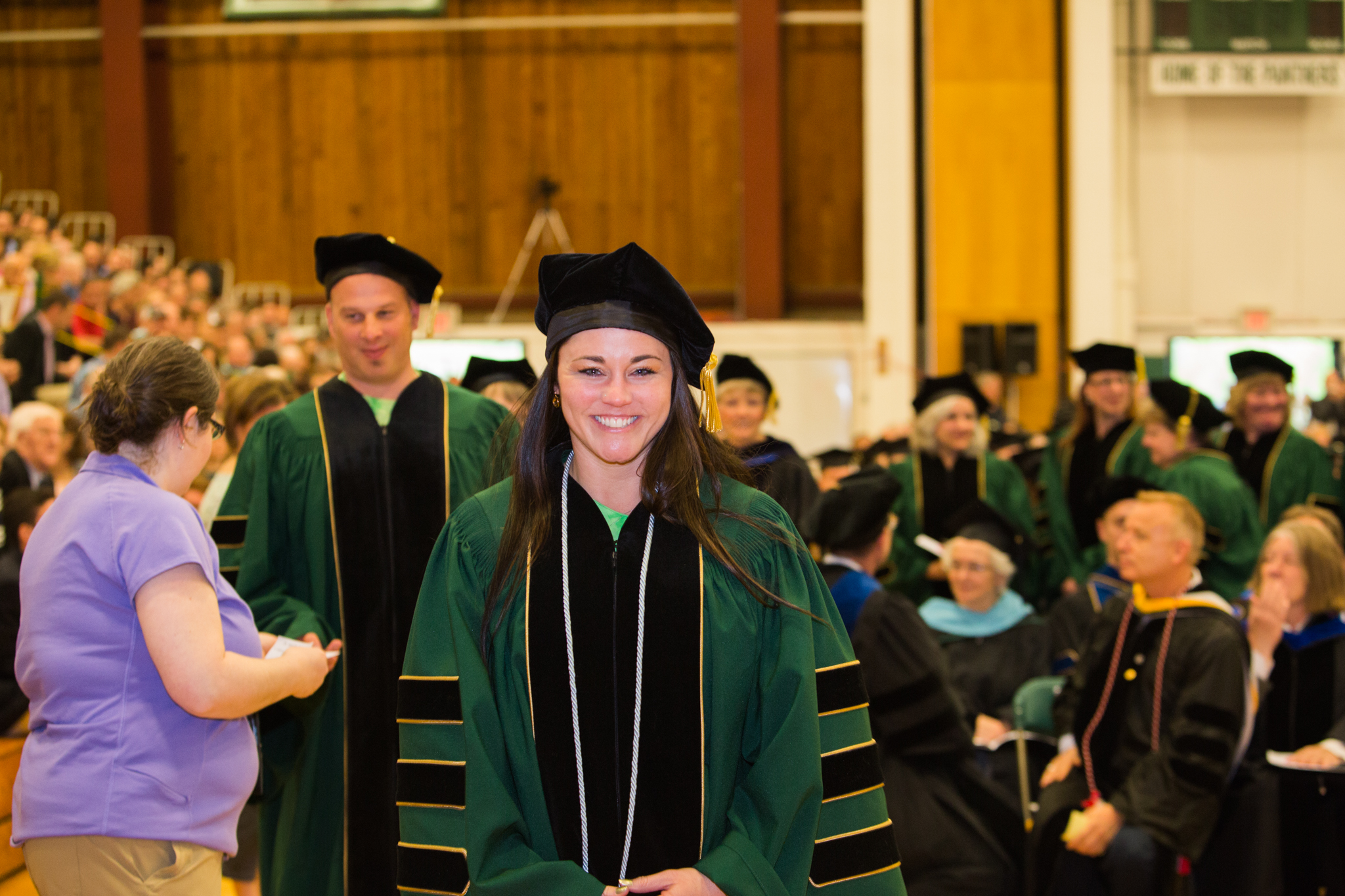 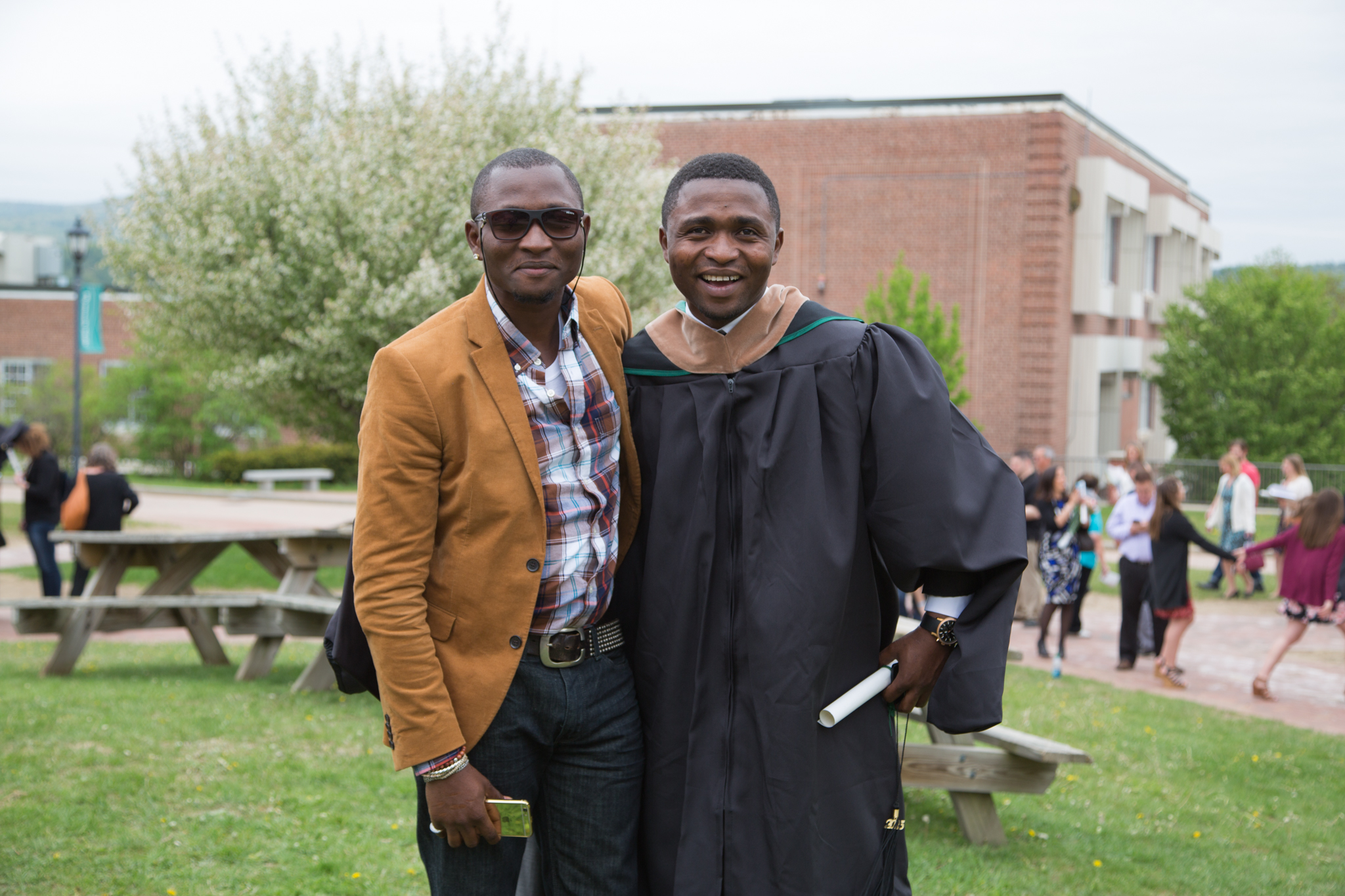 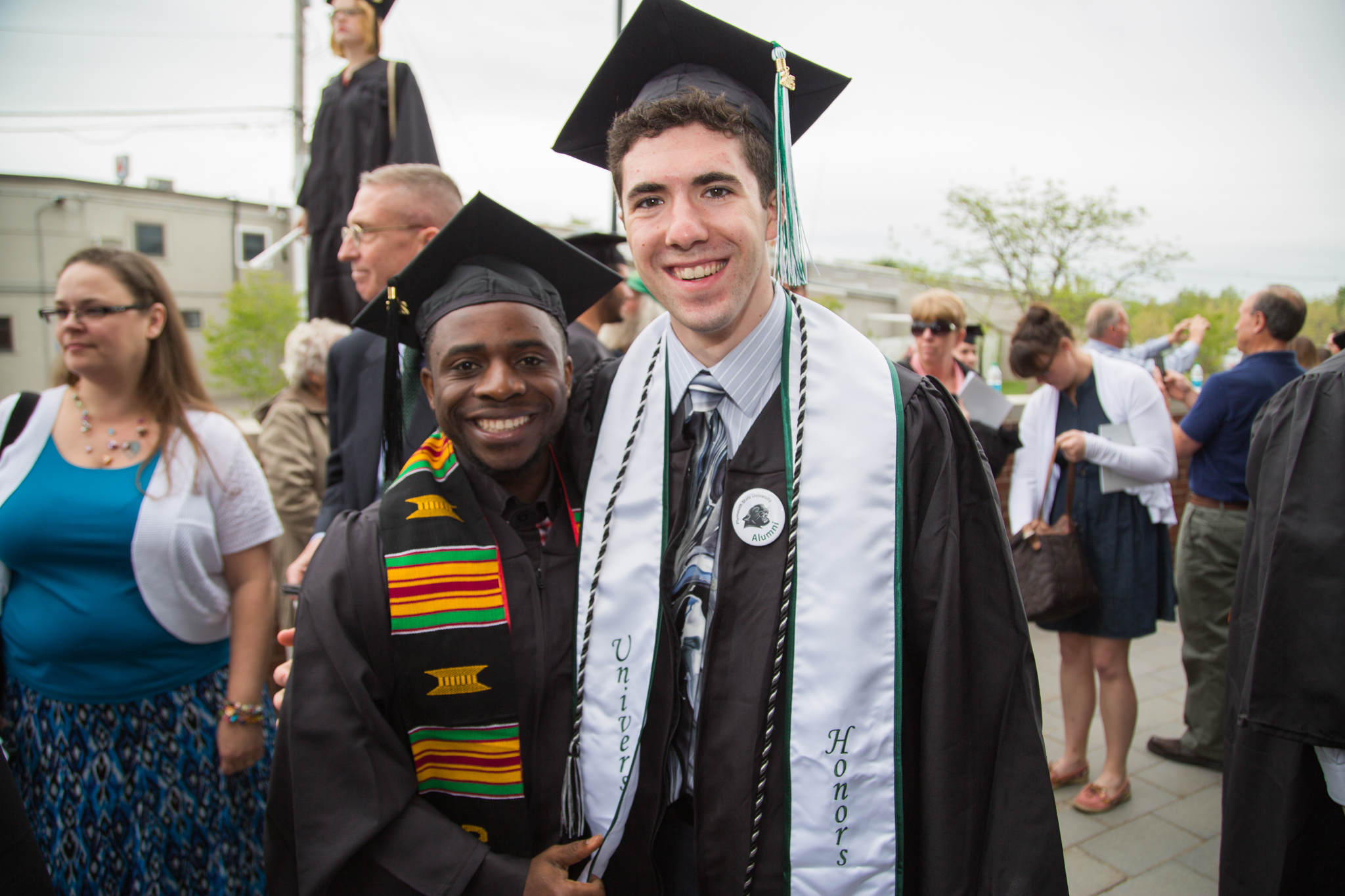 Graduates were all smiles at the 144th Commencement ceremony. Kaleb Hart ’11 photo. 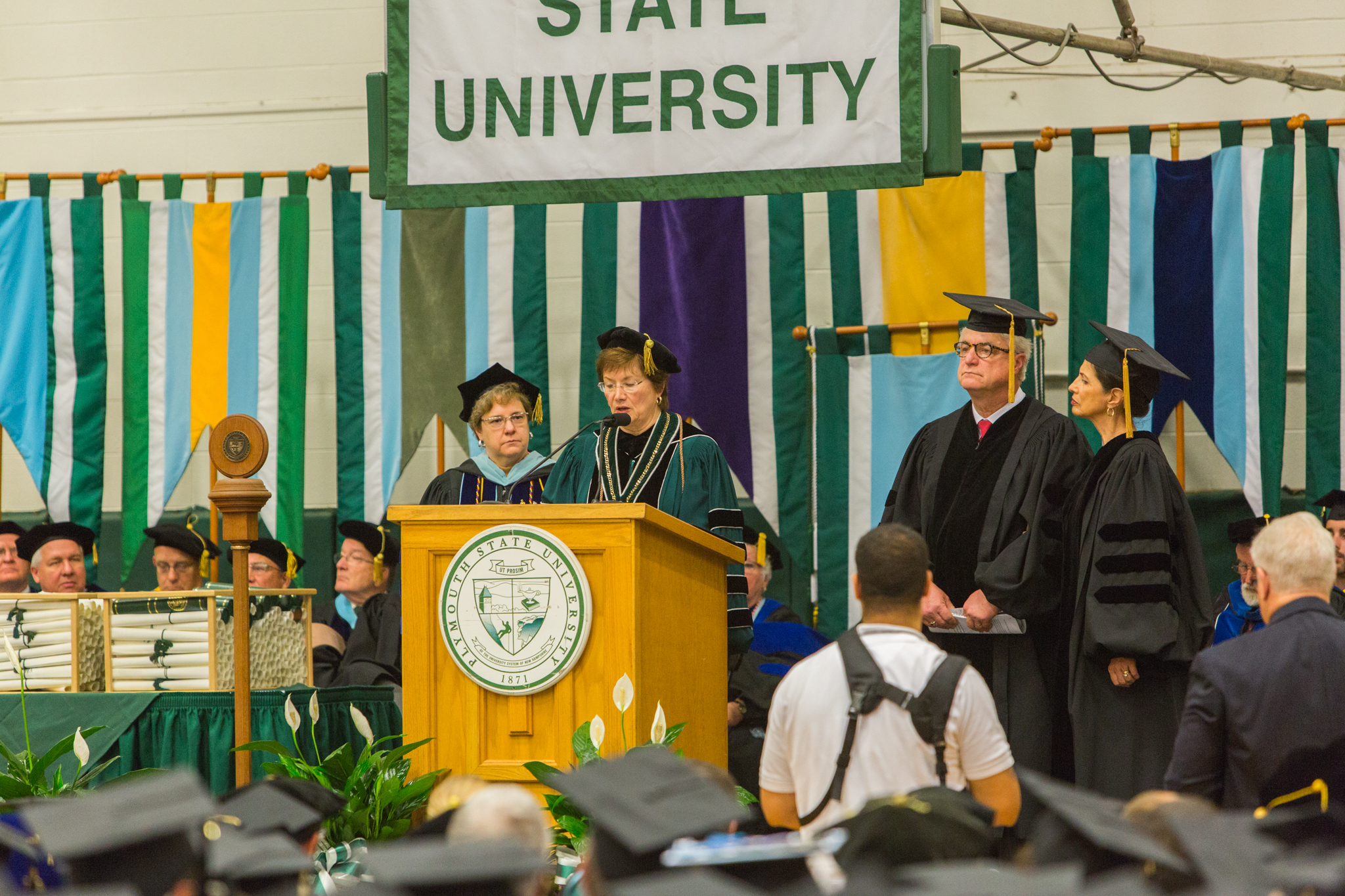 “Today, you join the ranks of those who will support future students to ensure a vibrant PSU for generations to come,” said President Steen at the ceremony. “Students, you have worked hard. You also have received a great gift. Use it well.” Kaleb Hart ’11 photo. 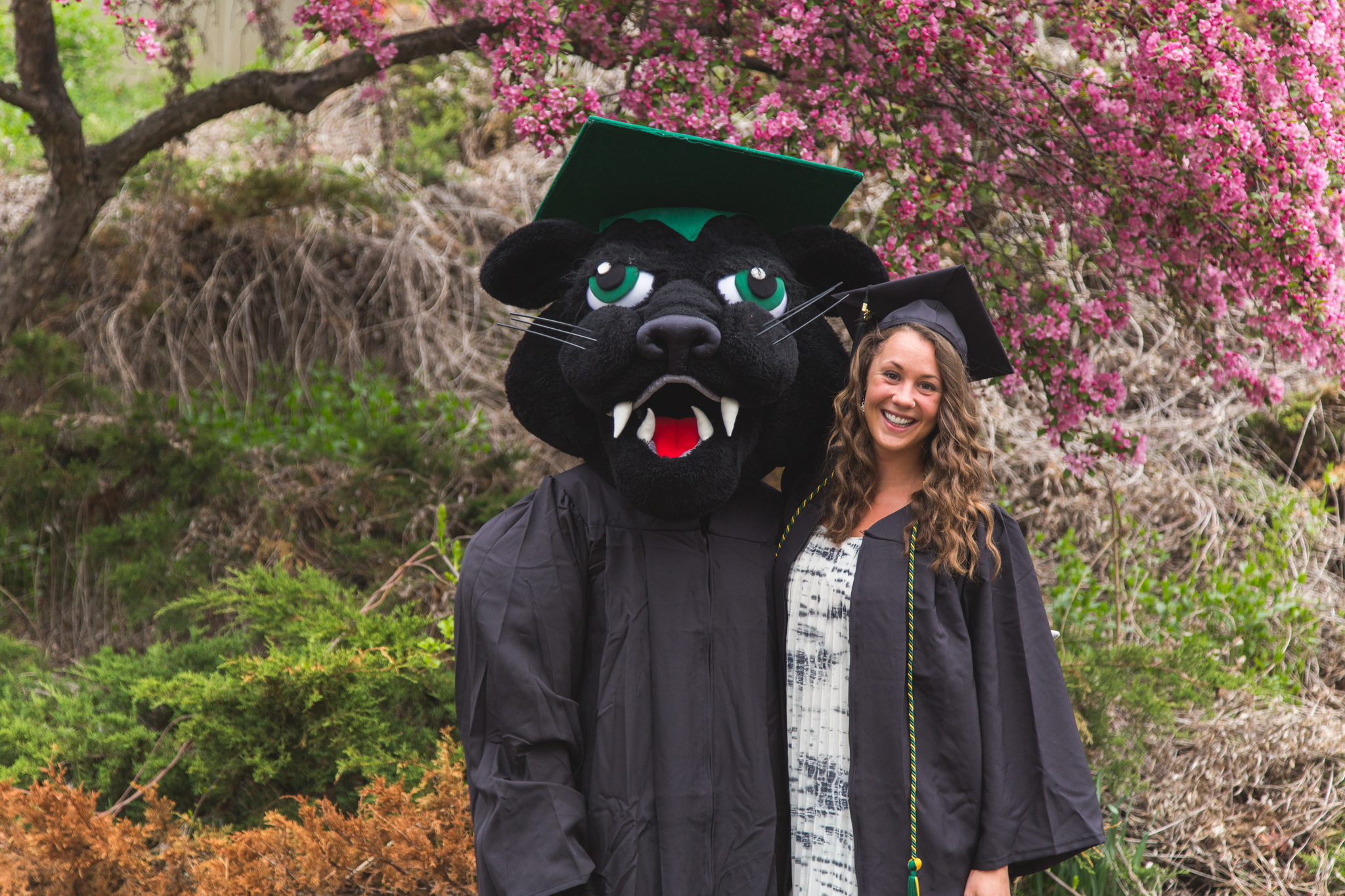 Plymouth State wants to know what you’ve been up to since graduation!  Send us your professional and personal accomplishments—career...
Copyright 2019 Plymouth State University
Back to top