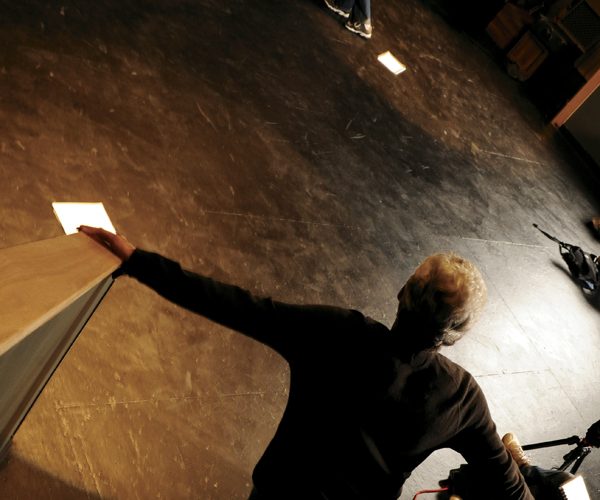 The setting is the Studio Theatre in the Silver Center for the Arts, the time is 3:30 p.m. Ten students stand in pairs with their arms across each other’s shoulders. Each student is standing on one leg. A strong, powerful voice tells one student in each pair to lose energy, to drift, to lean. Some of the pairs stand with little effort throughout the exercise; others have to return to standing on both legs; a few fall. “It’s okay if you stumble,” the voice says. “Just like life.”

The students have begun their third rehearsal for Human Beings, a play by Ernest Thompson, the Academy Award- and Golden Globe-winning author of On Golden Pond. The voice belongs to the author himself, who has come to Plymouth State to workshop the play, and who stands amidst the students as they struggle to help each other maintain their balance.

The first draft of Human Beings dates back to 1985. The play has never been produced before, and the current version is half the length of the original draft. It’s still a work in progress, too, as the students are learning.  “I know the writer,” Thompson says with a mischievous smile, “so I can make changes.”

Human Beings is a play about cruelty and inhumanity—indeed, quite literally about what it is to be human. There are elements of science fiction, and some of the characters speak in a language never before heard by human ears.

Thompson’s association with Plymouth State University dates back to the days of Plymouth State College. He came to the area when On Golden Pond was being filmed on Squam Lake, then moved here in the early 1990s. Soon after, his play Amazons in August received a staged reading in the then newly built Silver Cultural Arts Center.

Nowadays, Thompson devotes much of his energy to Whitebridge Farm Productions, a New Hampshire-based film and theatre production company he founded. His partners in that endeavor, Morgan and Lori Murphy, have both taught theatre courses at PSU, and Morgan Murphy has directed a number of plays at the University, most recently the Stephen Sondheim musical Company.

Whitebridge, for which a number of PSU students and alumni intern, is currently developing and producing two feature films, both written by Thompson: Time and Charge$ and Elysian Farm. Whitebridge also offers acting workshops and intensive weekend writing workshops taught by Thompson. According to Cox, the workshop embodies a primary goal of PSU’s theatre program. “We want the theatre department to be a place for new work, and we want students to learn what it means to be involved in the early stages of a play’s development.”

But the students aren’t the only ones learning from the workshop, as Thompson points out. “My job description supposedly involves teaching, but I find that I’ve done just as much learning: about my play Human Beings, about how little difference there is between my students’ creative dreams and my own, and, yet again, about how the process is always what matters most; the results take care of themselves.”

In the rehearsal, Thompson divides the students into groups of three. Two students hold the third by the legs and arms and carry them around the room. “Didn’t realize you were signing up for a gym class, did you?” Thompson asks.

The exercises all have a specific purpose. “I’m emphasizing the physicality,” Thompson says. “This is an uncomfortable play, and the actors need to feel that.”

The exercises aren’t limited to rehearsal time. Thompson instructs the students to find somewhere solitary and dark, and to spend time there. “You need to experience disorientation,” he says. “The time I catch any of you being comfortable, I’m going to ask what’s wrong with you.”

After the exercises, the students sit down and share research they have done over the past week on various disturbing topics: female genital mutilation, eugenics, ghastly experiments on prisoners of war, the horrors of factory farms. Thompson asks the students for a single word to explain how this research relates to Human Beings.  “Power,” a student says. “Control,” offers another. Cruelty, inhumanity, fear, and prejudice are also offered.

“We’ve been reading the play in pieces and when you have time to think about it, you … really grasp how timeless this play is,” says Marni Balint ’11. “Mostly because you could put it in any society and see how it can be an interpretation of their history or the people there.”

“Do you think the story will have a happy ending?” Thompson asks. No one says yes.

Every few pages, Thompson stops the actors and has different people read the roles. The workshop process, he hopes, will help the students understand better “where a play comes from,” and he wants students who are interested in aspects of theatre other than acting to be able to learn through this project more about writing, directing, and staging a play.

“It’s so sweet!” one student says.

The playwright grins. He agrees with both reactions. At least the characters know wherethey’re supposed to go from here, he says. Will it all work out? There’s no answer to that question. But the characters, for all the suffering they experienced or committed, have a chance.

Matthew Cheney, an adjunct instructor of English and women’s studies at PSU, has published fiction and nonfiction in a wide variety of venues, including One Story, The Las Vegas Weekly, Rain Taxi Review of Books, and The Quarterly Conversation. His short play Feel the Rage was part of a production called The Sins directed by Ernest Thompson.

An Unforgettable Semester at Sea

Dick Hage: A Man with a Full Plate 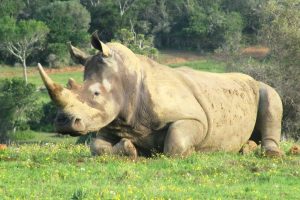 An Unforgettable Semester at Sea

In fall 2008, the University System of New Hampshire (USNH) announced an exciting newopportunity for financially challenged...
Copyright 2019 Plymouth State University
Back to top