Faculty Forum: Filiz Otucu on Democracy and the Middle East 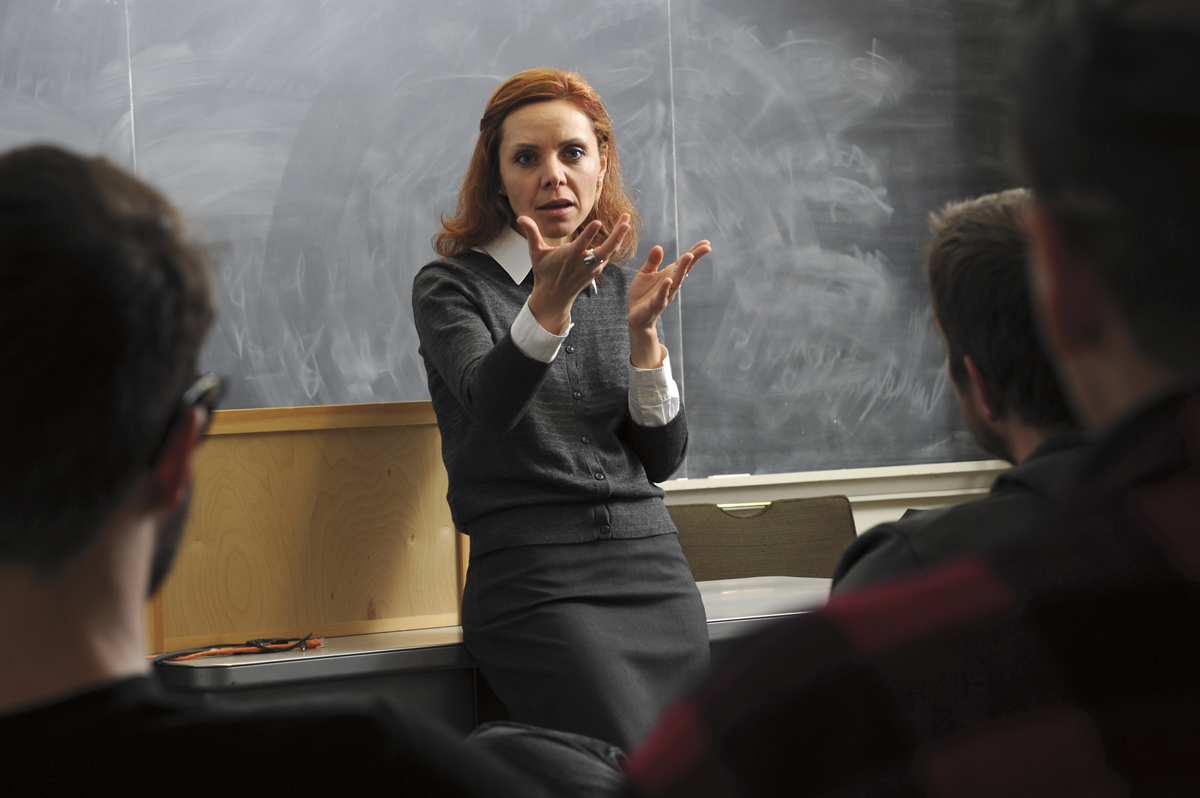 Otucu in her class, Politics and Conflict in the Middle East. Jon Gilbert Fox photo.

Filiz Otucu is a professor of political science and specializes in international relations, Middle Eastern politics, and the United Nations. A native of Turkey, she earned her MA at the University of Central Oklahoma, and her PhD from the University of Kentucky. Otucu teaches courses on politics and conflict in the Middle East, terrorism and counterterrorism, and political Islamic fundamentalism. Plymouth Magazine asked Professor Otucu to share her thoughts on democracy and the Middle East, where Islam is the predominant religion.

If you would want us to pay attention to one thing about our view of the Middle East, what would that be?

We need to pay attention to our misperceptions, be open-minded and understand where the other person is coming from. A big part of understanding is becoming aware of our stereotypes—not to put them aside, which is very difficult—but to be aware of our biases and start questioning. A simple example: many of us think jihad means “holy war.” But for 99.9 percent of Muslims jihad is an inner struggle to be a good Muslim, to be a good person.

We get most of what we know about the Middle East from the media. If they focus on what moderates are talking about and what Islam is really about, how many people will watch? But if the story is about a bombing, we watch. Media is a part of our culture, and we fall prey to its influence.

Why does the Middle East seem so anti-American?

It’s important to note that, with the exception of a very small group of extremists, the majority of Middle Easterners are not against Americans. They are only critical of American foreign policy decisions because they pay the price for them. When the West gets involved militarily, civilians often are killed. Collateral damage happens, but the majority of these civilians are innocent people and somebody’s loved one. An apology does not cut it.

When your loved ones suffer or die because of sanctions or military attacks and your life becomes so desperate, you are more inclined to listen to extremists and be manipulated. We have to be careful about what we are doing and how it affects people’s lives—the consequences of our actions. We should not give extremist leaders reason to get better at their propaganda and win people over.

How can the US support democracy in the Middle East?

There is a debate about whether Islam is compatible with democracy. Increasingly, Muslims themselves are saying “yes,” and Islamic political movements and parties are deciding to take part in elections whenever possible. Terminology matters. You cannot sell Western liberal democracy to many Muslims because Muslims associate it with Western colonialism. But some are embracing features of democracy like human rights, elections, and the rule of law. These concepts are consistent with the Islamic concepts of ijma (consensus) and shura (consultation).

The Islamic democratic movement is a work in progress. Indigenous calls for democratic reforms are being heard in almost every part of the Muslim world. Unfortunately, pro-Western Arab and Muslim dictators, not necessarily Islamic activists, have been blocking any real democratic opening.

Supporting democratization is not about elections, but rather how we can help liberalization of these societies. The West can play a role by not supporting dictatorships, and by pressuring authoritarian regimes when they attack their own people. We can exert pressure for gradual reforms. The Middle Eastern countries need a strong civil society to produce leaders and mobilize the public around democratic movement. Democratization should come from both above and below. We can help civil society organizations to gain strength, making it bottom up, people demanding those liberties. We can pressure the leadership to allow civil liberties, to include them in the constitution and to guard them very dearly. Then, real democracy can flourish in the Middle East.  ■

Teaming Up for Service