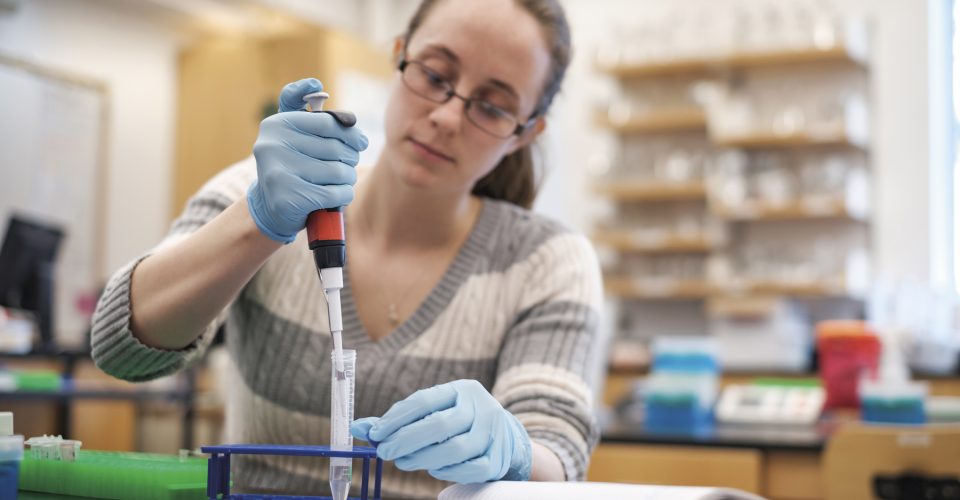 »
A broken heart and a heart attack may not have very much in common, but they’re both painful in their own way, and both can leave scars. Unlike the scars that follow heartbreak, scars following heart attack don’t fade with time, and they often prove fatal.

Cardiac fibrosis, or scarring of the heart, develops after a heart attack or as a result of cardiovascular disease. This is part of the healing process, much like when skin develops scar tissue following injury. Because people develop cardiac fibrosis in varying levels of severity, treating it can be a risky proposition: both overtreatment and undertreatment can have dire consequences. If doctors can determine whether their patients are genetically predisposed to developing cardiac fibrosis, they can take much of the guesswork out of treating them, and improve long-term outcomes.

Ashley Kennedy ’16G, a student in PSU’s Master of Science in Biology program, believes that day isn’t far off. With advances in research, she says, “Medicine is becoming more individualized. We’re starting to sequence cancer patients’ genomes to figure out what treatments are going to be most effective for them. And that’s what we’re working toward for people with cardiac fibrosis.” In the Molecular Genetics Lab in Boyd Science Center, Kennedy and her colleagues—a mix of ambitious graduate and undergraduate biology students—have homed in on a particular gene called Connective Tissue Growth Factor (CTGF), which plays a key role in the body’s healing process. Following a heart attack, or in the case of cardiovascular disease, “CTGF acts as a signaling molecule, telling different cytokines [proteins], ‘Come here, we need to help fix this,’” explains Kennedy. “The question is, are there differences in each person’s CTGF gene that affect the levels of fibrosis severity that person develops?”

Since she arrived at PSU in fall 2014, Kennedy has been working closely with her colleagues to answer that question. She’s been involved in just about every aspect of the research, including taking cell samples from healthy subjects across campus via cheek swab, extracting DNA from the cells, and amplifying (copying) regions of the CTGF gene so they can be sequenced. The sequencing is done at the Molecular Biology Core Facility at Dartmouth College, one of PSU’s biomedical research partners.

Then Kennedy and her PSU colleagues compare each individual sequence to that of the published human genome, which can be found on various websites. “We look for single-base differences, or single nucleotide polymorphisms,” says Kennedy. Single nucleotide polymorphisms (SNPs) are the most common genetic variation among people. Researchers have found SNPs that may help predict an individual’s response to certain drugs, susceptibility to toxins, and risk of developing particular diseases. “For the past year and a half, we’ve been sending samples out for sequencing and using this data to compile a list of SNPs found in the CTGF gene.”

The next phase of the project is to introduce SNPs into a tissue culture, and see how they respond. How does it affect their expression of CTGF? Do certain SNPs cause higher expression than others? These are just some of the questions the researchers will be considering.

Kennedy’s the first to admit that lab work can be tedious: “Nothing ever works the first time,” she laments. “It’s constant troubleshooting.” But then there are those moments of pure exhilaration that make all the trial and error worth it: “We had a region of a gene that we couldn’t get a sequence for—for over a year, nothing we did worked,” she recalls. “Just recently, we got it. After putting in all that work, it was great to put the pieces of that puzzle together.” Ashley Kennedy chose to pursue her graduate degree in biology at PSU after learning about biology professor Heather Doherty’s research in cardiac fibrosis.

Regardless of the kind of day she’s having in the lab, Kennedy has gained a wealth of research experience that could have implications far beyond the lab in Boyd. “This research could, in the long-term, benefit people’s health,” she says.

In the meantime, she’s preparing to graduate in May and defend her thesis based on her research later this summer. Leaving PSU will be bittersweet, as it also means leaving the research project in which she’s invested two years and so much of herself. But work on the project will continue in Boyd Science Center, and Kennedy will find new medical puzzles to help solve. “I love being in the lab and doing research related to human health,” she says. “Whether it’s in a university, a hospital, or a pharmaceutical company, I definitely plan to have a career in medical research.” ■ Barbra Alan, photos by Kaleb Hart ’11 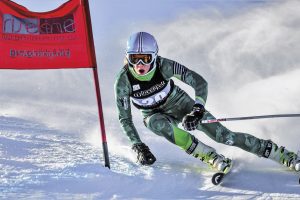 Freydis Holla Einarsdottir ’19 came this close to competing in the 2014 Winter Olympics in Sochi. Since coming to PSU,...
Copyright 2013 Jupiter Premium Magazine Theme
Back to top