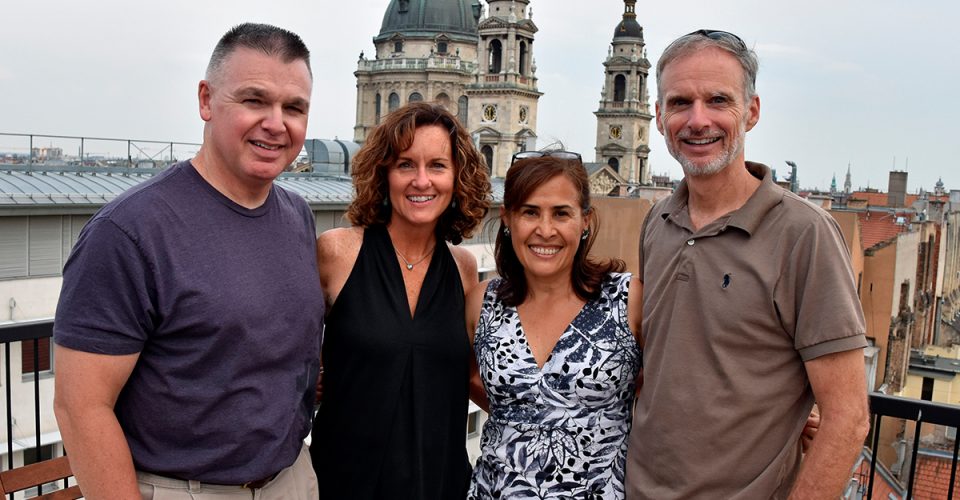 Classes ending in 4 and 9, celebrate reunions this year at Homecoming & Family Celebration and Reunion Weekend, October 4–6, 2019!

Robert J. Griffin ’73 worked for Digital Equipment Corp in Boston after graduating from PSU. He then moved west to work for Microsoft in Seattle, WA. After Microsoft, he moved to Sun Microsystems, and then built a computer reseller business that grossed $50M per year. Griffin retired after the dotcom crash, and now lives with his dog and rescue donkeys just below South Lake Tahoe, where he mentors others.

Carolyn A. (Greenier) French ’74 has retired after 37 years of teaching first, second, and third grades!

Lynn Miller ’74 received a commendation from Governor Christopher Sununu on August 30, 2018, for her contributions in teaching and coaching tennis throughout her career. Since retiring in 2015, she has been assistant tennis coach at Colby-Sawyer College, coach for the boys tennis team at Kearsarge Regional High School, coach for a women’s 3.0–3.5 team at the Newport Tennis Club, and an on-call tennis teaching pro at the Lake Sunapee Country Club. She continues to compete in the summer USTA Senior tennis tournaments and has been ranked #1 in New England in her age group in doubles for many years. Miller has been inducted into several halls of fame, including Plymouth State College, the USTA/New England Tennis Hall of Fame, Wheaton College Athletic Hall of Fame (Inaugural Class), and most recently, the USPTA/ New England Hall of Fame.

Bill E. Bunker ’76 has been named vice president of operations with Asiana Cuisine Enterprises. He has worked in the food industry since graduating from Plymouth State. The last 11 years, Bunker has become a sought-after professional in the freshly prepared Asian/sushi market, holding several key positions with industry leaders.

Rebecca A. Wolin ’79 is currently the director of finance and administration for the Berskhire South Regional Community Center in Great Barrington, MA.

Chuck Morse ’84 has been elected to the District 22 State Senate seat, overcoming previous holder Richard J. O’Shaughnessy. He is president of NH state senate, and served as acting governor for a few days in 2017.

Scott A. Tierno ’87 has escaped the cold North and landed in Nashville, TN, after more than 22 years at Southern New Hampshire University in leadership roles. Tierno is taking on the role of director of commencement and special events at Vanderbilt University.

Renee A. (Capicchioni) Vannata ’89 is the owner of Monkey Mind Escape Rooms in downtown Portsmouth, NH.

Michael C. Tempesta ’91 has been appointed the next superintendent of SAU 6 serving Claremont and Unity, NH. Tempesta heads to Claremont after years of leadership positions in Massachusetts. Before taking the reins at the Central Massachusetts Special Education Collaborative, Tempesta was the superintendent of schools in Saugus, MA, principal at Milford and Ashland High Schools (MA), and assistant principal at Sharon High School (MA). He began his educational career as a high school English teacher at Ashland High School.

Julie A. (True) Kingsley ’93 owns and operates The Manuscript Academy, which connects fiction writers and top agents and editors in the publishing field. They offer a range of classes, critiques, and live events.

Lisa A. (Sanfilippo) Watling ’93 has been a marketing specialist at Bruin Plastics Company, Inc. in Glendale, RI, for over 20 years. “Although my degree is in geography,” she writes, “my time at Plymouth prepared me for any business career due to the well-rounded education I received.” She has a daughter, Emily, 18, and a son, Evan, 13.

Jennifer C. Corduck ’93, ’23P became the principal of Bowman Elementary School in Lexington, MA, in July 2018 after working in Melrose, MA, public schools for 21 years. She writes, “I have fond memories of my practicum and student teaching experiences. They by far were my favorite part of the coursework. I also appreciated how well our professors got to know us. Dr. Barry and the staff from the education department had an impact on me. I love what I do and feel fortunate that my job is challenging, rewarding, and always changing.” Her son, Hunter Corduck, Class of 2023, will start his first year at PSU in the fall. Good luck, Hunter, and Go Panthers!

Stephen G. Tucker ’94, ’16G, ’18CAGS has been appointed superintendent of the Laconia School District. He has been a history teacher and academic coordinator of Laconia High School, as well as director of curriculum for Gilford School District.

The PSU Alumni Association Board of Directors unanimously supports the re-election of Amy Begg ’97 for a second four-year term as our alumni representative to the University System Board of Trustees. All alumni are eligible to vote in the online election, and will receive a link to the online secure site for voting on Monday, June 10, 2019.

Update your contact information at go.plymouth.edu/InfoUpdate to ensure that you receive the e-mail link to vote.

Keith J. Noyes ’00, a fifth-grade teacher at Belmont Middle School, has been named 2019 New Hampshire Teacher of the Year. In his application, he wrote, “Realizing that all learners obtain, store, and retrieve learning at different rates and through unique experiences has shifted the way I teach, assess, and ultimately determine each child’s level of proficiency. Because kids learn at different paces, I’ve learned to personalize both instruction and assessments to better allow the children to succeed.”

Michelle L. (Monahan) Harvell ’01 has joined the PSU Alumni Association Board of Directors. She is an experienced event and marketing coordinator with proven capabilities in multiple aspects of marketing and event planning. Harvell is currently a board member of the Thacher Common Condo Association and volunteers as a Girl Scout leader. Previously, she was the marketing and event coordinator for the Greater Salem Chamber of Commerce and director of new business and events for South End Media in Concord, NH. She lives in Exeter, NH, with her husband, Tom Harvell ’94, and their daughter, Kendall, where she enjoys spending time with family and friends.

Larry C. Pignataro ’01, ’05G has joined the PSU Alumni Association Board of Directors. He is married to Misa Pignataro and they reside in Stratham, NH, with their daughters Alya (7) and Haley (4). Larry is a business development/account manager at Competitive Energy Services, which provides strategic energy consulting services to commercial, industrial, governmental, and institutional customers in the US and Canada. He has worked in the energy sector for the past seven years. Past work included Fidelity Investments and the University System of NH. While at PSU, Larry was involved with the Men’s Rugby Team as president and treasurer, worked in the Controllers Office, was involved with the Student Activities Allocation Committee, and wrote for the Clock. Current interests include spending time with his girls, and coaching and refereeing youth rugby and golf.

Mary L. (Young) Bragg ’01 has worked for the Commonwealth of Massachusetts since 2015. Before that, she had a job in financial services for 12 years. She married Todd A. Bragg at Moraine Farm in Beverly, MA, in 2012. Together, they have two girls, Grace (5) and Maebel (2).

Dr. W. H. Davin Townley-Tilson ’02 will be teaching first-year cell biology and genetics at High Point University in High Point, NC, while collaborating with other faculty on various research projects.

Rachel E. (Lewis) Gasowski ’03 is the director of parks and recreation for the town of Durham, NH. She writes, “I was able to land a job in my field directly after college. I love how every day is different, and brings on new challenges and experiences. I’m connected to the community and feel as though I’m making a difference!”

Dennis A. Giangregorio ’03  has been promoted to director of the Chestnut Hill, MA, CPA firm, Samet & Company PC.

Charyl A. (Lavigne) Reardon ’03 has been named president of the White Mountains Attractions Association, which for more than 60 years has promoted one of the most popular tourism regions in New Hampshire. “I am beyond excited about the energy, enthusiasm, and passion of my team,” says Reardon. “I am looking forward to leading this organization, which understands the economic impact of tourism, and has helped to make memories for generations of families from across the country and around the world.”

Laura L. Brusseau ’04 has received the 2018 Lakes Region Good Scout Award. Ms. Brusseau teaches ninth-grade social studies at Inter-Lakes School and is a co-founder of the Faith, Hope and Love Foundation. Her lifelong love of giving back to the community started when she was a young girl and continues today—church suppers, Girl Scouts, AmeriCorps, alternative spring break work with Habitat for Humanity, fundraising events, committees, boards, and so much more. Her dedication to passing the value of service on to her students makes her an excellent role model and community hero.

Timothy G. Carrigan ’04 has accepted a new position at the National Endowment for the Humanities as the grants policy analyst to work with program staff across the agency to develop funding opportunities. Previously, he spent nearly 12 years at the Institute of Museum and Library Sciences.

Dave Feeley ‘04, strength and conditioning coach of the University of Miami Hurricanes NCAA Division I Football Team, was recently quoted in a Sports Illustrated feature on the topic of persistence.

Daniel W. O’Halloran ’04 will be installed as 2019 president of the New Hampshire Association of Realtors, the state’s largest trade association, in a ceremony at the Grappone Conference Center in Concord on November 15. O’Halloran has been a realtor since 2005, and in March he opened O’Halloran Group of Keller Williams Lakes & Mountains Realty in New London, NH, where he is the lead broker. He has been an NHAR director since 2015 and served as chair of the organization’s communications committee from 2013 to 2017. O’Halloran was president of the Sunapee Region Board of Realtors in 2016 and was its Realtor of the Year in 2014. Dan and his wife, Christina (Paradis) O’Halloran ’04, met when they were Plymouth State seniors and members of the Marketing Association, where Dan was president and Christina vice president.

Matthew B. Wilhelm ’04 has been recognized by the New Hampshire Union Leader on its 2018 list of 40 Under 40 honorees.

Patrick Cate ’05 has accepted the position of vice president of academic and student affairs at Lakes Region Community College.

Michael F. Leonard ’05G, ’15CAGS has begun his first year as a full-time elementary school counselor at Dhahran Hills School of Saudi Aramco Expatriate Schools in Saudi Arabia, after 18 years as a teacher.

Tracy J. (Lucci) Lindquist ’09 is a school psychologist at a vocational technical high school. After graduating from Plymouth State, she went on to graduate school at the Massachusetts School of Professional Psychology and earned master’s and CAGS degrees in school psychology.

Jana L. Ballard ’10 is the digital marketing manager for Lahey Health. She chose Plymouth State for its location, smaller class sizes, atmosphere, and sense of community. She writes, “It was nice that you get to know your professors and you aren’t just a number. They actually care about you and your success.”

Lee Rashkin ’11 and Julie Cote opened a new fast-casual restaurant in Durham, NH, called Nomads Kitchen. The restaurant offers a build-it-yourself menu, encouraging individual creations. It combines their love of travel with their love of food, crafting what they call global flavors.

Andrew Gray ’14 is now the recreation director for the town of Brentwood, NH.

Adam Nazzaro ’16 has taken over as the new sports editor of the Needham Times with the MetroWest Daily News. 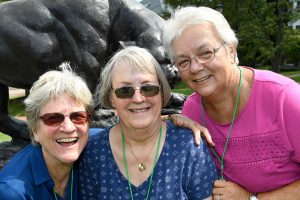