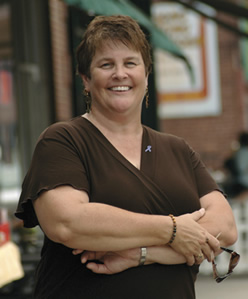 These words sum up Diane Tiffany’s approach to public service. Tiffany, a gift processor in the Advancement Office since 1997, loves how volunteering allows her to meet people on campus, especially students. Over the years, her longtime personal philosophy of “do no harm” has evolved into one of actively serving her community.

While growing up in Concord, NH, Tiffany’s parents were strong public service role models. Her mother, Nell Thompson Tillotson ’46, was a Brownie and Girl Scout leader and her father did frequent service work as a member of the Masons. Tiffany was active in her church, in Girl Scouts, and in the Order of the Rainbow for Girls, a service organization for daughters of Masonic lodge members

In her daily work as a gift processor, Tiffany records gifts to the University, both cash and non-cash, and regularly interacts with donors. “In addition to my primary bookkeeping function, I am honored to steward our donors and their gifts,” says Tiffany, who graduated from Plymouth State with a bachelor’s degree in elementary education in 1976. “We have many wonderful and generous donors and I am pleased to be of service to them, whether it’s responding to a request or doing a little something extra to let them know how much we value and appreciate them.”

The PSU community played an important role in drawing Tiffany back into volunteer work. In 2001, she responded to a call on campus to join the Making Strides Against Breast Cancer walk in Laconia. There, she met Nancy Conklin, the former coordinator of PSU’s Community Service Learning Center, who sparked her interest in becoming active in community service. “Nancy’s actions are inspiring, and she got me to think about something that was missing in my life,” says Tiffany. “She’s a great role model for me.”

A year later, the March of Dimes WalkAmerica fundraising event came to Plymouth. Tiffany volunteered for the planning committee and served in that capacity from 2002 to 2007. She remains active in the organization to this day, handling tasks like registering participants and identifying which teams and walkers raised the most money. After that first WalkAmerica event in 2002, Tiffany’s interest in volunteerism grew considerably. “Things just kind of snowballed. I found more and more things to do,” she says.

Another area nonprofit that Tiffany supports is AHEAD (Affordable Housing, Education, and Development), a Littleton, NH organization that helps people find affordable housing and provides homebuyer education to northern New Hampshire families. Tiffany and her husband Rick, a building services worker for PSU’s Physical Plant, got involved with the group in 2004 when they took one of its courses for first-time homebuyers. In 2007, AHEAD chose the Tiffanys from over 300 families to receive the Homebuyer of the Year Award for their efforts to improve their community.

Tiffany has also been involved with Keeping You, Me, and Memories Alive, a nonprofit organization that raises funds for area cancer patients and their families, since 2003. She served as the group’s treasurer from 2004 to 2006 and recently accepted the position again last spring. Tiffany has helped organize the entertainment for the group’s cancer walk, lining up entertainers to perform and recruiting student groups like the Anime Club and the Gaming Club to play games with children and do face painting during the event. “We are local people, helping our friends and neighbors,” she says.

As a volunteer, Tiffany is as active on campus as she is off campus. She has served on the Operating Staff Fundraising/Scholarship Committee since 2004 and participated in many of the small fundraising events that were necessary to make the Operating Staff Endowed Scholarship a reality. Last spring, senior class officers invited her to join the committee that selects recipients of the Top 28 Outstanding Senior Awards, a program that honors graduating seniors who have dedicated themselves to campus and community service. Tiffany also spent four years on the University’s Professional Development Committee, which allocates funds used to help staff members build their skills. “I do a lot on campus—those little things that just kind of pop up that you can do in the evening or just on your lunch hour,” she says.

Tiffany’s remarkable involvement in volunteer work and charitable activities has made her a well-known face on the PSU campus and in the Plymouth area. Her unwavering commitment to those in need has earned her more than a few awards, honors, and nominations, such as Northway Bank’s Community Counts award in 2005 and the Campus Compact for New Hampshire’s President’s Good Steward Award in 2007. For Tiffany, such recognition pales in comparison to what she sees as the true benefits of her work: getting to know the students, having fun, and “doing the right thing.”

“I think it’s important for us at the University to be role models to our students,” says Tiffany. “Doing volunteer work is my opportunity to be a role model. It’s meaningful for me to support our students and their activities.”

Keeping Dance on Its Toes

Faculty and Staff Recognized for Excellence 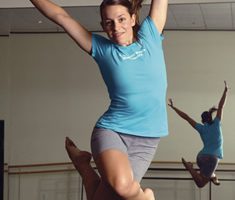 Keeping Dance on Its Toes

by Barbra Alan If you mistake Amanda Whitworth for a student, no one could blame you. Beyond her youthful appearance is a boundless...
Copyright 2019 Plymouth State University
Back to top