Plymouth State wants to know what you’ve been up to since graduation! Send us your professional and personal accomplishments—career changes or promotions, advanced degrees and awards, military service, volunteer work, marriages, births/adoptions, and other information—so that we can share it with your classmates, alumni, and the University community.

Patty Whitney ’72 writes, “After 44 years of owning and operating a ski and bike shop in Pennsylvania, my husband (Dave Whitney ’71) and I retired in September and moved to Thornton, NH. We’re enjoying being closer to family again, and skiing bigger mountains!” Amy Bassett ’90 (left) was named the Maine District Director for the U.S. Small Business Administration (SBA) in January 2017. She has been with the SBA since July of 1990 and has spent most of her career in the New Hampshire office. She tells us, “I’m really looking forward to working with small businesses and economic development partners in Maine.”

Christine A. Tebbetts ’91 joined the PSUAA Board of Directors. Tebbetts is an attorney in family law based in the Lakes Region of New Hampshire.

Bryan Litchfield ’96 received the Biddeford-Saco-OOB Courier Great Person Award in January. Litchfield, who is a social worker at JFK Memorial Elementary School in Biddeford, ME, was recognized for his problem-solving mindset and generosity. In addition to his work at JFK Memorial, Litchfield created and runs a food distribution program in the Biddeford community.

Heather Davis ’96 has been promoted to associate director of athletics at University of New England. Davis has been with UNE since 2010 and was previously head women’s soccer coach. Prior to joining UNE, she coached soccer at Lock Haven University and Carnegie Mellon University, and has notched 177 victories in her 19-year coaching career.

Jonathan Haas ’00 has been selected to lead the Valparaiso University women’s golf program. Haas previously served as the head girls and boys golf coach at Crown Point High School in Crown Point, IN, where he was named Post-Tribune Boys Golf Coach of the Year in 2013 and 2015 and received the Indiana High School Golf Coaches Association Distinguished Service Award.

Patrick T. Leahy ’01 joined the PSUAA Board of Directors. Leahy is an officer for the city of Holyoke, MA Police Department.

Amanda Bacon ’04 (above), director of sales and marketing at Palmer Gas & Oil, has been named one of 2017’s Rising Leaders in the propane industry by LP Gas Magazine.

Dan O’Halloran ’04 has completed a two-year term as president of the Lake Sunapee Region Chamber of Commerce. O’Halloran, who works in real estate, joined the chamber in 2009.

Dan Corn ’05, completed his final examination to become an IFMGA/American Mountain Guide-certified ski guide. Corn splits his time guiding between the Tetons and the Chugach and Denali ranges of Alaska. Dustin Siggins ’08 (right) has been hired as director of communications and public affairs for the Pet Industry Joint Advisory Council. Siggins previously worked as a reporter and commentator for numerous publications, and was a public relations consultant. His work has been published by USA TODAY, Huffington Post, Real Clear Policy, National Review Online, and elsewhere, and he has appeared on dozens of radio and television programs. His clients have received exposure at outlets such as Reuters, the Washington Post, Roll Call, the Washington Examiner, One America News, and more.

Gene Martin ’09 has been named director of development for Concord, NH-based Future In Sight, formerly known as the NH Association for the Blind. Martin, who lives in Manchester with his wife, Erin, has nearly a decade of experience in fundraising, communications, event logistics, and program management on state political campaigns. Future In Sight serves residents throughout New Hampshire and other parts of New England.

Mark Murphy ’09 has been promoted to vice president of operations for Mr. Mac’s Macaroni and Cheese. Murphy started with the Manchester, NH, location of Mr. Mac’s in 2010 and was promoted to general manager in 2012. He will be responsible for all operations in Mr. Mac’s company-owned restaurants and will act as liaison on all operational matters with Mr. Mac’s franchisee-owned locations.

Amberlee Barbagallo ’12 recently accepted a position as alumni leadership coordinator at Dartmouth College and moved to the Upper Valley area of NH. She writes of her new position, “I love the fact that I get to promote everything wonderful about New Hampshire in a new and wonderful way.” Josh Huber ’13 helped save the life of a high school wrestler in New Jersey in January. Huber, who wrestled at PSU, assisted others in performing CPR and using a portable defibrillator to rescuscitate Brandon Gonzalez, who went into cardiac arrest during a match. Gonzalez was taken to a local hospital after being revived and is doing fine.

Adam J. Rego ’15 is scheduled to enter the police academy in Plymouth, MA, in June. Rego, who graduated from Bishop Stang High School in North Dartmouth, MA, and has received a conditional offer of employment from the Dartmouth Police Department, has previously worked as a nuclear officer at Pilgrim Nuclear Power Station. 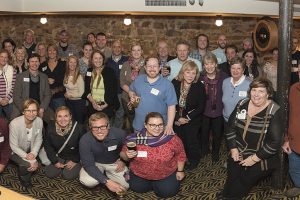 Meet up with alumni in your area and take a trip back to PSU for Homecoming and landmark reunions!   SEACOAST CHAPTER...
Copyright 2019 Plymouth State University
Back to top