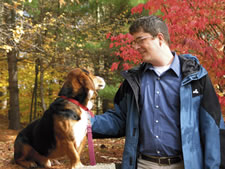 Mike Thevenin and Bassey. For several weeks after Thevenin returned, he fostered Bassey, a heartworm-positive dog from the Gulf Coast, until Bassey was well enough to be adopted.

Mike Thevenin spent his fourth wedding anniversary alone in a tent surrounded by animals, but he wasn’t on safari. He was in Tylertown, Miss., about 90 minutes north of New Orleans.

For 12 hot and muggy days in September, the PSU Graduate Studies information technologist volunteered with the Best Friends Animal Society, ministering to some of the many animals (including reptiles, ducks, pot-bellied pigs and a six-foot tall emu) rescued from New Orleans. He took along $515 that PSU colleagues had donated to provide direct support for the rescue efforts.

Much of his time was spent taking care of dogs rescued from New Orleans—more than 400 by the time he arrived at the sanctuary. Thevenin also spent several days in New Orleans working street to street as a part of a rescue team. Most animals found alive were in relatively good health, although some needed and received immediate veterinary care. Some were starving and dehydrated, and some had chemical burns from toxins in the water. Some were hours from death, but after rehydration they often made amazing recoveries.

The rescued animals not only received triage and basic necessities for survival; they were given selfless and compassionate companionship from all the volunteers and staff of Best Friends. “It was incredible to work with a group of people who were all very dedicated to the well-being of the animals brought to the sanctuary. Images in the media do not come close to actually standing on a street in New Orleans. The stillness, the smells and the vast destruction were inconceivable. And sometimes overwhelming,” recalls Thevenin. “You have to focus on each individual animal,” he continues, “because the need is so enormous. You know your time there is limited. You have to see the value in what you do, animal by animal. But it was hard to leave.” While the long days were both emotionally and physically exhausting, he’d do it again without hesitation.

Since coming home, Thevenin has registered for EMT training—something he’d thought of doing for a long time, but kept putting off. “Those 12 days made me aware that there is more I can participate in that is very fulfilling. My time with Best Friends was a life-changing experience.”—Betsy Cheney

Working Together for Hurricane Relief 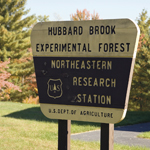