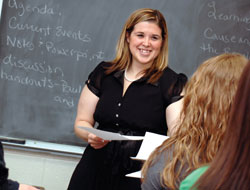 When asked to explain the source of her drive to help others, Laura Brusseau ’04 credits her family. “My parents always led by example,” she says. “We were raised to give back, and everyone in my family does community service.”

As a student at Plymouth State, Brusseau immersed herself in service activities, including volunteering with Habitat for Humanity, and cofounding Hunger and Homelessness Week, an annual PSU event that has grown in popularity in the years since.

After graduating from PSU, Brusseau carried the spirit of service with her into her teaching career. As a social studies teacher at Inter-Lakes High School in Meredith, NH, she created a community service requirement for two of her classes, worth 10 percent of the students’ overall grades. For many of her students, this is their first opportunity to volunteer in their community.

“I love teaching the entire student,” says Brusseau, who also coaches junior varsity soccer and serves as an advisor to the Class of 2012.

Brusseau thought she was doing all she could until the day one of her students said, “People always teach about making a difference, but no one ever follows up on it.” In those words, Laura heard a call to action; she went home that night and wrote a mission statement for a nonprofit foundation that would help disadvantaged children and youth. She asked her close friend Jessica Dutille ’03 to join her, and together they created the Faith, Hope, and Love Foundation, which launched in 2006. Since then, two other Plymouth State alumni have joined the foundation, Whitney MacKay ’03, who serves as a marketing representative, and Seth Richards ’03, the foundation’s Web master.

Initially, the foundation’s grants were relatively modest. “One of our grants gave a family a nice Christmas that they wouldn’t have had otherwise, and another provided gas money for a child to see one of his parents,” Brusseau recalls. “We’ve also provided funds for a flight to Europe for an exchange trip, for a winter jacket and boots, for textbooks, and to support a family in financial need.”

But thanks to the success of the foundation’s annual fundraising event, a benefit dinner, the foundation was able to award its largest grant to date, a $1,000 scholarship. “[Jessica and I] just looked at each other and said, ‘Wow, we’re helping someone go to college!’” Brusseau says.

because there are thousands of people who make a difference every day,” she says, adding that she couldn’t do what she does without the assistance of family and friends. “My family is loving and supportive, and there’s no way on earth I could run the foundation by myself.”

She also credits her time at Plymouth State University with giving her a strong foundation for her success. “Over my four years at Plymouth State, I gained confidence, had leadership opportunities, and received awesome training.”

When she considers her future, Brusseau sees herself someday becoming executive director of the foundation full-time. “It gives my life a purpose when we give a donation to someone,” she says. “What we’re doing really matters.”

Rhiannon Hutchinson is a freelance writer based in Windsor, VT.

A Thirst That's Partly Mine

New curriculum and more opportunities in graphic design by Barbra Alan The U.S. Bureau of Labor Statistics projects that...
Copyright 2019 Plymouth State University
Back to top