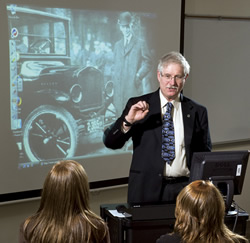 Business Department Chair and Professor of Economics Trent Boggess talked to Plymouth Magazine last fall about his passion for the Ford Model T and his take on the state of the automobile industry  and the U.S. Economy

How and when did your fascination with antique cars, particularly the Model T, come about?

I’m fourth-generation Ford; my great-grandfather and grandfather sold Fords, and my father worked for Ford as a plant engineer for 37 years.

My own interest in Ford was sparked by the September 1964 issue of Boys’ Life, in which the feature article was about the Model T. I later learned that my family still had one of its Model Ts, which I was able to rescue from storage in the basement of a warehouse when I was 17. During my college years, I spent two summers at Ford putting together Econoline vans.

How did your research into Ford—the man and the company—begin?

After my father retired from Ford, he volunteered at the Henry Ford Museum, [in Dearborn, MI] in what’s now known as the Benson Ford Research Center. They drew upon his knowledge of engineering and he helped process some of the accessions, including accessions involving the Model T. That got my interest, and I started going there to do research.

In 1997, my first sabbatical leave was spent at the Benson Ford. My task was to reorganize Henry Ford’s office papers so that future researchers could have  better access to them.

What has your research taught you about Henry Ford?

I focus my research on the early years and early products of the Ford Motor Company—the period between 1903 and 1913, when I believe Mr. Ford was at his best. During this period, he was an entrepreneur and very innovative. He recognized his inability to design an entire automobile by himself—he knew he didn’t have all the skills. What he did do was identify other individuals who had the talent and skills he lacked and enlisted them into his projects.

As a billionaire businessman in the early twentieth century, Mr. Ford had an influence over the economy that nobody has been able to match. Mr. Ford’s one billion dollars in 1920 allowed him more influence over more things for longer than anyone ever had before or has had since. The village industries are a good example: Mr. Ford wanted to put farmers to work and give them an income at a time when they would otherwise not be working. Right around the Dearborn area, up the Rouge River, he set up village industries—small, water-powered mills where they would make Model T parts. Also, women in the Ford factories received the same wages per hour that men did. Equal pay for equal work. Mr. Ford and the Ford factories hired more physically disabled people than anyone else, for the same wages as non-disabled workers. And when he found he disagreed with the way health care was being handled in Detroit, he bought and named a hospital, Henry Ford Hospital, as a way of driving down costs of health care.

Mr. Ford was often criticized for not creating a large charity like Rockefeller and Carnegie; I think the reason for that comes down to his philosophy—he was always willing to give a hand, but not a handout.

As a professor of economics, what is your take on the current state of the automobile industry, and what do you see for its future?

Auto sales are dismal right now for a couple of reasons. For one, there’s the psychological factor: People are thinking about the economy and the possibility of unemployment, and they are reluctant to take on a five-year loan for a new automobile. Also, the credit markets are so tight right now that even a customer with good credit could be turned down for a loan. The banks are not extending any more credit than they absolutely have to. And, of course, the automakers were already on the ropes because of the change in consumer demand. Because of gas prices, Americans are more fuel-conscious and aren’t driving as much. They’re not going to rush out and buy SUVs and pickups. The auto industry needs to respond to that shift in demand. For too many years they relied on pickup and SUV sales as their principal sources of income.

What about the U.S. economy?

There’s some hope. It’s no longer the U.S. alone. It’s the U.S. and all the other developed countries’ central banks working together to try to stem this crisis and get credit flowing again.

How soon this crisis ends will greatly depend on how soon housing prices stabilize. Right now, nobody wants to buy a house, and nobody wants to lend money for a house, because nobody knows the true value of a house anymore. You could buy a house this month and discover next month that the price dropped, leaving you owing more than the house is worth. That’s one of the mortgage lending companies’ concerns. Housing prices need to stabilize, so people know what a house is worth, and what it’s likely to be worth into the future, before that kind of lending is going to take place. The latest prediction from people in the federal reserve is that the prices won’t stabilize until mid-2010.

Honestly, the recession hasn’t started to hit yet. The unemployment rate hasn’t gone up that much yet, but it’s going to. By the time this magazine is published, it will most likely be over the 6.7 percent it is now—maybe even over seven percent.

My advice to President Obama and Treasury Secretary Geithner is to read The History of Banking in the United States by John Jay Knox. Our country has a long history of times when the banking and financial industries have been unregulated and each time it has always resulted in a catastrophe in one form or another. There’s a reason why banks were so heavily regulated; it’s because of the problems we see today.

The words “another Great Depression” are being bandied about in the media. Is there any validity to this, or is it just hype?

You have to go a long way to qualify as a depression. The standard is the Great Depression. At its worst, between 1929 and 1933, half of all U.S. banks closed their doors. This was before there was insurance on bank accounts: people were losing their life savings. That’s one of the reasons the FDIC was created, to try to prevent that from happening. That’s also the reason the FDIC increased insurance limits from $100,000 to $250,000 last October.

In 1933, the official unemploy-ment rate was about 25 percent. Unofficially, it was probably 33 percent—one in three Americans was out of work. It was a time of destitution because there wasn’t a social safety net. There are many differences between now and then. One of the reasons America went into financial panic is because the Federal Reserve System didn’t do anything. Today’s Federal Reserve System is very active in trying not to repeat the mistakes of the past. Nevertheless, the size of the problem is immense, and it is global. Chances of a sharp recession are pretty good. And then there will be a recovery.

Do you find these economic times provide teaching moments for you?

Yes. I wish I was teaching Money and Banking, because that would turn into a current events course. The world is really our students’ classroom. For some of the financial management classes, this is an example of how to protect yourself as well as what not to do. One thing I want students to learn is you don’t leverage your company 33 to 1, which is what Lehman Brothers did—that means for every dollar of capital, they had $33 in liability. It only takes a small drop in the value of assets to wipe you out, and that’s what happened. Nobody with any real experience in banking would go much beyond 12:1.

What we try to do in this department is focus on practical, applied business. Current events are part of the classroom. We need to explain to our students what is happening and help them understand why it’s happening. We don’t talk about theory now—it’s all about application. 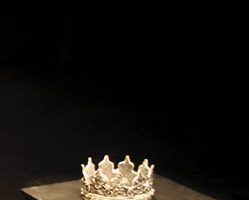