Playing with Our Food 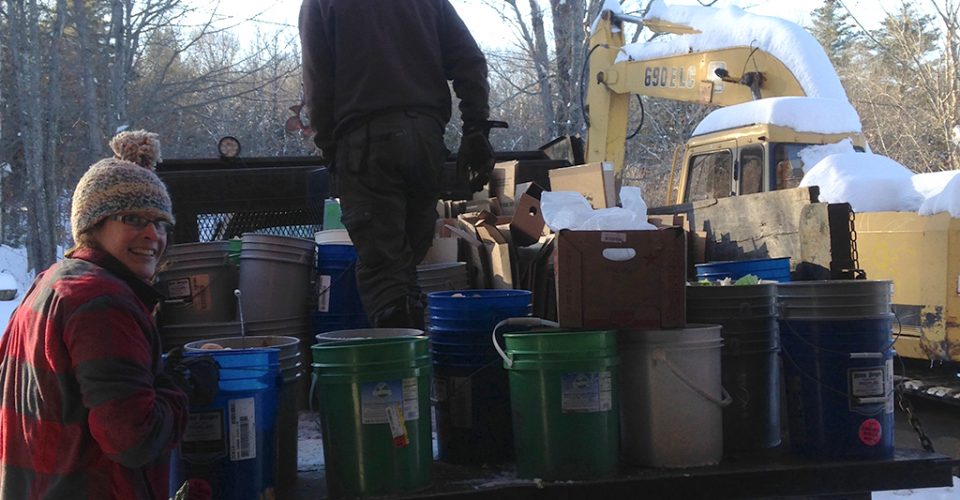 Kady Hoffman ’21, first-year student from Sherman, Connecticut, took a different approach in her First-Year Seminar class that addressed the wicked problem of hunger. Hoffman focused on food waste at a local level, studying D Acres Permaculture Farm & Educational Homestead in Dorchester, New Hampshire with hopes that her work will highlight the possibilities that food waste holds as a resource.

In the forests near Dorchester, New Hampshire, there sits a little farm that is the only lights for miles. It is surrounded by endless rolling hills covered in pine trees. Driving there from campus takes about 45 minutes and ends on a snow-covered dirt road that twists and winds leaving the visitor feeling a tiny bit lost like they’ve fallen with Alice in Wonderland through a hole in time. Finally, we arrive at a warmly lit homestead in the middle of the mountains. D Acres Permaculture Farm & Educational Homestead greets all its visitors from its perch on the hillside in a manner that shows that its clearly made for people. “That’s D Acres’ mission,” says Maureen “Moe” Rowe ‘12, D Acres’ program manager, “to bring people and the technology of sustainable living together. People are disconnected from where food comes from, and D Acres aims to bridge that gap.”

It’s a new divide in our communities. Historically, humans have been thoroughly involved in every step of their own food cycle, but since the advent of processed foods and technology to produce huge quantities, our culture is pulling further from food. We take its presence for granted. There was a time when a town’s culture was shaped around the food that they grew and cooked. Holidays were based on the harvest seasons, and homes were shaped around their kitchen where families cooked meals from recipes that had been passed down for generations. Food was eaten lovingly and every bite was cherished, but some parts of today’s culture have forgotten these values.

“People don’t know about food independence,” says Rowe. “We’ve forgotten how to provide healthy food for ourselves, leading to huge amounts of food waste that we don’t know what to do with.”

D Acres has been making changes in the community with its food waste program that feeds its livestock. When I first arrived at the farm, Will Ferullo, director of the food waste program, asked me to help him unload his truck. In the back I found five-gallon buckets filled to the brim with the spoils of a successful trip to Plymouth State University’s dining hall dumpster. As we unloaded the food, we sorted it into vegetarian buckets and meat scraps; a different bucket for each food item. One was filled with stale bread and another with melon rinds—buckets upon buckets filled with hundreds of pounds of food waste that would have gone to a landfill if it had not been saved.

We walked around the farm and stopped to visit each of the pig enclosures. D Acres has 15 pigs, all of which eat a five-gallon bucket full of food waste per day. Below their enclosures, D Acres grows crops in a section of tilled soil. Walking through, Rowe explained to me that food waste has the secondary benefit in the form of manure that makes the soil richly fertilized, which is fantastic for growing fruits and vegetables. She said that when they planted their first bed where the pigs had once been, they were blown away with the size and quantity of the vegetables that it produced. The farm uses these vegetables all year to feed its staff and the community during the weekly gatherings it hosts. It’s all made possible by using food waste in a cycle that ties the community back to its food culture. Instead of shunning food waste to landfills, D Acres uses it to create something new that the community can enjoy. It is creating a new culture of eating, focusing on spending time together. Rowe goes as far as to say that the pork produced on the farm is, “the best that I’ve ever had, anywhere in the world.”

D Acres teaches people the possibilities that food waste holds as a resource: they espouse that by understanding where our waste goes, we can establish a framework which allows us to begin to fix food waste. D Acres seeks to help expand the community’s knowledge base regarding food waste so that change can occur. Food waste is a vast issue, but its future is bright if we only pay attention and utilize it. With the help of hardworking people like those at D Acres, we can help society reconnect with traditional food values and reduce the amount of food that is wasted in landfills. 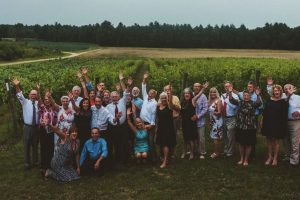 Plymouth State wants to know what you’ve been up to since graduation! Send us your professional and personal accomplishments—career...
Copyright 2019 Plymouth State University
Back to top