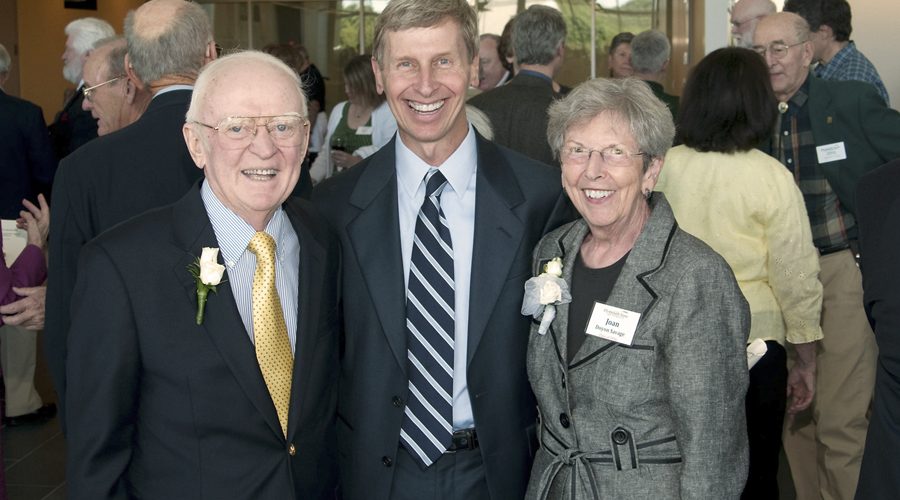 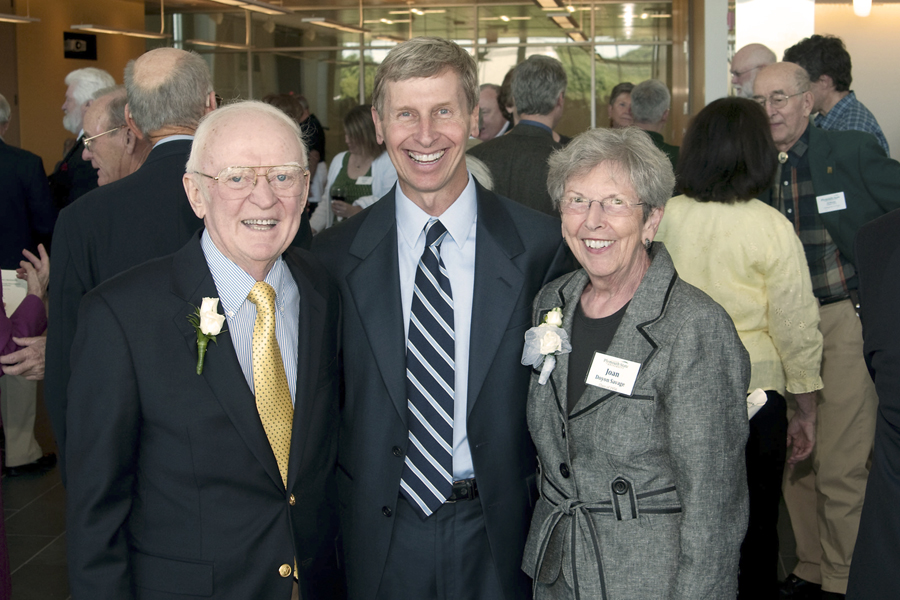 On May 14, 2012, New Hampshire lost a gifted educator, respected leader, and devoted friend. From his earliest days in education as a high school teacher, coach, and director of guidance, through his post as director of admissions at the University of New Hampshire, and later through his various administrative positions within the University System of New Hampshire, including vice chancellor, Eugene “Gene” Savage ’58 had a profound effect on so many in our state, including longtime friend Governor John Lynch. The piece that follows is from Governor Lynch’s remarks at Gene Savage’s memorial service.

As he did for thousands upon thousands of young people, Gene helped to shape my life.

It is because of Gene Savage that I fell in love with a state from which I would never leave.

Gene has helped me many times over the years.

He was a trusted friend and advisor to me as I served on the UNH Alumni Board and the University System Board of Trustees. When I was the newly elected chair of the Board, Gene taught me how to navigate my way around the state house, introducing me to legislative leaders. I didn’t understand it, but he always had a good word to say about everyone, even legislators who were not particularly supportive of the University System.

He would say, “Oh, they can be brought around.” Gene always had confidence in his ability to influence people in a positive way and that was why he was always able to bring people around.

If it hadn’t been for Gene, I might not have run for Governor. When I first thought about running for Governor, most people counseled me against doing it, questioning the timing, the money, and the history.

Gene took the opposite approach, because Gene always looked on the bright side of everything. Instead of seeing the negative, Gene looked at the possibilities and the opportunities, seeing things in ways most people could not.

Gene’s optimism and belief in me gave me the confidence to persevere.

As Governor, there have been times when you need someone to pick you up, someone you trust without question.

During these times, in addition to talking with my wonderful wife, Susan, I would call Gene. He loved to talk about how great his Florida softball team was doing, a team he was very proud of, but the conversation always quickly turned to Plymouth, USNH, and the State.

After hanging up, I just felt better, re-energized, and ready to get back to work.

Gene’s glass was always more than half full. In fact, it was filled right to the top.

That was a great thing about Gene. He didn’t keep that optimism to himself; in fact, it was a contagious condition, which spread to all of us who knew him. He could lighten up a room from the minute he walked in and immediately make everyone feel comfortable no matter the situation. Another part of what made Gene so special was he invested his time and his personal energy into people, which is a rare quality these days.

As I have talked to people about Gene one thing is very clear—everybody knew Gene and Gene knew everybody. That’s because he treated all of us like we were his best friends.

While his roots were in his beloved North Country, Gene had a deep love for all of New Hampshire.

From his service at the University System, to his service on various boards and commissions, Gene dedicated himself to his work, his community, and his state. He had a passion for helping people, for improving higher education, and for bettering his community.

And of course, Gene was half of a tremendous team. Gene, along with his wonderful wife, Joan, were active in the Durham community for many years, and they were both ardent supporters of UNH and Plymouth State. That is why it is so fitting that Plymouth State named the welcome center after Gene and Joan.

Gene Savage was a rare, special person and I am honored to have called him a close, personal friend. The University System, higher education, and the state would be very different right now if it weren’t for Gene Savage.

We could say that New Hampshire today is worse off because of Gene’s passing—that as a state, we have lost a little bit of what makes this such a special place. And that would be true.

But if I look at it the way Gene would have—optimistically—I can say New Hampshire as a state and we as a people are so much better off because of Gene Savage.
—Governor John Lynch

It didn’t take too long for Jim Hundrieser ’90G to feel at home in his new role as vice president for enrollment...
Copyright 2019 Plymouth State University
Back to top