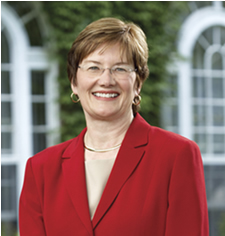 On the morning of Thursday, April 20, at 10:35 a.m., a crowd of faculty and staff members and students gathered in Hanaway Theatre in the Silver Center for the Arts. Dr. Sara Jayne Steen, escorted by Professor Peng-Khuan Chong and Student Body President Jeremy Foskitt, mounted the steps to the Hanaway stage and stepped to the lectern to formally accept her appointment by the USNH Board of Trustees as the next president of Plymouth State University.

“Plymouth State University is a resource of which New Hampshire can be proud,” Steen said. “It has evolved from a normal school to, under President Wharton, a state university that combines first-rate undergraduate education with growing research and graduate programs and genuine engagement with New Hampshire’s communities. The University’s future is bright. I’m honored to have been recommended by Chancellor Reno for the position and look forward to joining the team of wonderful people who are Plymouth State University and to having the opportunity to share in that future.”

In presenting her name to the trustees for their vote, Chancellor Stephen J. Reno said, “Dr. Steen is a teacher to the core, an administrator of demonstrated skill and a much valued citizen of her community. This superb combination of values, talent and experience will serve well the future development of Plymouth State University and its partnership with the local community, the region and the state of New Hampshire.”

Trustee Gene Savage ’58, chair of the Presidential Search Committee, also praised Steen highly. “Dr. Steen’s extensive background in public higher education, both as a teacher and as a senior administrator, positions her to be a very effective leader at Plymouth State University,” he said.

Sara Jayne Steen comes to PSU from Montana State University (MSU) where she served as dean of the College of Letters and Science from 2003 to 2006. She brings nearly 30 years of experience in higher education as a faculty member and senior administrator. Steen assumed the PSU presidency on July 1, 2006 from Dr. Donald P. Wharton, who has retired after serving as Pymouth State’s president since 1993.

First in Her Family

Sara Jayne Steen grew up in Oregon, Ohio, a small city about the size of Laconia, N.H., situated in the northern part of the state near Lake Erie. Her mother had worked as a secretary. Her father, the oldest child in a large family, had left his home in Appalachia as a young man to find a factory job that would allow him to help support his younger brothers and sister. He started cleaning floors in the Libby-Owens-Ford glass factory; and by the time Sara Jayne was growing up, he held the position of “foreman of the foremen.” “It’s very clear to me that the life I have is a much better life than I could have imagined, in part because of good decisions other people made—good decisions my parents made early on, about being focused on education,” Steen said. Like many Plymouth State students, she was the first in her family to attend college, and she did so with the help of scholarships, part-time work and wise planning on the part of her parents.

“My parents believed in education and had not had the opportunity to have an education beyond high school,” Steen recounted. “It was clear to me from the time I was a child that they wanted me to go to college; and that, even though they didn’t have a lot of money, they were saving to help me do that.”

As a child, she was naturally inclined to exploring the life of the mind. “I was a reader. What I found in books was the wonder of the world. And I could enter other people’s lives and other cultures,” Steen recalled. “Reading was something that mattered enormously to me, and still does. So that if you ask me at a given time ‘What are you reading?’ I’m probably in the middle of three things, and I’d have to ask you ‘What genre?’”

Steen was hired to teach in the English department at Montana State University in 1978 and became a full professor in 1989. Teaching is still very close to her heart. The most rewarding aspect of teaching for her is “watching students become genuinely excited about something to the point where they don’t need you. As a teacher, you can get them started and teach them how to learn. You give them the baseline and then they go on—and even teach you back.”

She fondly remembers students who became so excited about projects they had begun in her class that they kept going after the class was over. Steen ended up creating an independent course for them so they could earn credit for the extensive work they were pursuing on their own, although the students had not even asked her to do so. “That’s really a joy. What you know you’re doing is transforming minds. It’s very rewarding.”

In 1996, MSU recognized Steen’s outstanding contribution as a teacher by presenting her with their President’s Distinguished Teaching Award.

Steen’s scholarly work has two parts. “One is discovering works by Renaissance women writers, and the second is learning how to assess those works and how to re-evaluate what we know of familiar writers when we can bring other voices to the conversation,” she said. “You ask different questions of Shakespeare if you’re also reading Arbella Stuart. And that has been exciting as well. There’s an impact on the curriculum in terms of the questions you ask.” She has published five books and many journal articles and has presented numerous papers and workshops.

One of her books, The Letters of Lady Arbella Stuart (Oxford University Press, 1994), tells the story of Lady Arbella through Stuart’s own letters to relatives, her husband, the royal family, court officials and friends. “(Stuart) was a claimant to the throne. She married—without King James’ permission—another claimant to the throne. They were imprisoned separately, they escaped separately, they fled to France separately. He made it, but she was recaptured. She died in the Tower of London,” Steen explained.

“What you have in the letters is her perspective on her world: the world of court, the world of patronage, the world of politics at that time. You see her, in some cases, deliberately lying to people, creating fictional characters, as part of the letters she’s writing. There’s even a letter in which she notes on a draft, ‘I belie myself extremely in this.’

So you have a very clear sense of the degree to which she knew that what she was saying was merely politically expedient, the words that she hoped would gain her freedom.”

In 1996, Steen discovered a new and exciting interest when she agreed to become chair of the MSU English Department, her first full-time foray into academic administration. “I wanted to become chair because I wanted to make the department a better place. I discovered that I like helping other people succeed, and that’s really what you’re doing as an administrator. You put in place what students and faculty and staff need to succeed—it’s seeing how to do something and making it happen for students and faculty.”

In 2002, Steen participated in the ACE Fellows Program, a leadership development program for vice presidents, deans, department chairs and other college and university administrators, sponsored by the American Council on Education. For Steen, the fellowship involved spending a year in residence at the University of Delaware. ACE fellows work directly with presidents, observe and participate in key meetings and events, and take on special projects and assignments with an experienced team of mentors. As an ACE fellow, Steen was able to participate in national meetings and seminars, visit other campuses around the country, and work with international educators. According to the American Council on Education, of the 1,500 ACE fellows to date, 300 have become chief executive officers at institutions of higher learning.

As dean at MSU, she led a large and diverse college of 15 departments and eight centers, offering 80 undergraduate and graduate programs of study. She was active with alumni and the community and in funding new campus classrooms, laboratories, and buildings.

When the presidential search at PSU was announced and she was nominated for the position, Steen was intrigued by where the university has been heading. “It appeared that this was an institution that was moving in a very good direction and still held to a wonderful tradition, that there was a commitment to students and an excitement about new programs, and opportunities, and partnerships. I found that energy and balance very engaging. And there is a generosity of spirit on this campus.”

Steen’s husband is aviation writer Joseph Bourque, who also holds a Ph.D. in comparative literature. They have three grown children and two grandchildren. In addition to her love of reading and of playing the piano, Steen enjoys hiking and biking, activities for which the Plymouth area offers many opportunities.

Because she is a child of the Midwest and has spent her professional life in the West, the move to New England will bring a transition for her. While Steen and Bourque both have family in the New Hampshire and Massachusetts area and often have visited, she feels she has much to learn and plans to take time to get to know the residents and traditions of the town and region as well as the campus culture. She looks forward to “traveling the state and getting to know the people of New Hampshire.”

Steen continues, “There are so many exciting things going on here at Plymouth State University. Every day I discover more about the accomplishments of our students, faculty, staff, and alumni; and I’m looking forward to the opportunity to share that with others.”

President Sara Jayne Steen and her husband, aviation writer Joseph Bourque, enjoy the summer weather in the garden of the President’s House on the PSU campus.

The Team and the Teen 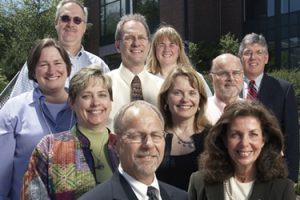 by Kristin Proulx Jarvis For PSU’s College of Graduate Studies, metamorphosis has taken on many forms. First, there’s...
Copyright 2019 Plymouth State University
Back to top