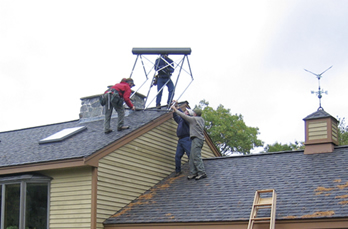 Peter Adams ’83, Sandra Jones ’84 and Chris Buckley ’94 are the driving forces behind the Plymouth Area Renewable Energy Initiative (PAREI). PAREI is a non-profit organization founded to encourage energy conservation and energy efficient practices, and to promote the use of renewable energy in homes, businesses and public buildings in the Plymouth region.

Adams, Jones and Buckley each contribute their own unique talents and personality to the benefit of the group, which over the past two years has developed a membership of over 120 families and businesses, many of whom include Plymouth State alumni.

Adams brings his knowledge about the environment and the impending oil shortage, a strong understanding of the technical side of the solution, and a powerful ability to communicate. Jones said he is the public relations face of the organization. Adams is president of EVP Creative, a digital imaging company in Waterville Valley. Adams, and his wife, artist Robbin Keith Adams ’83, live in Campton with their 9-year-old son, Ben.

“Sandra gave the project ‘legs,’” says Adams, explaining that his long-time friend has the organizational and administrative skills to make things happen. When they first began planning the group, Jones was adamant that the organization actually do something, not just talk about it. Her passion “not to talk, but to do,” resulted in the group’s decision to concentrate on helping members install solar water heating systems on their homes. “This is the biggest bang for the buck in terms of energy savings,” she explained. Jones is a part-time employee of PAREI; among other duties, she writes the grant proposals that help fund the organization. Originally from New Jersey, she has lived in the Plymouth area “since my father dropped me off at Smith Hall dorm in 1980.” Until 2002, she and her husband, Tim Gotwols ’84, owned Riverside Cycles in Ashland.

Buckley’s strength is community outreach. He came to Plymouth State in 1977, attending off and on until he graduated in 1994. He works part time for PAREI, as well as teaching in PSU’s English department. Jones called him a local celebrity. A regular fixture of Café Monte Alto on Main Street in Plymouth, Buckley knows many people from all different walks of life. He emphasized the need for an all-inclusive, non-hierarchical group run by its members. Thanks to him, PAREI has a very diverse membership—young and old, liberal and conservative, wealthy or not—whose only commonality is living in or near Plymouth, N.H., and being interested in renewable energy and ways to prepare to live in a lower-energy world.

Adams is eloquent on the subject of peak oil production, saying, “The world is going to change. Oil is going to rise in price—believe it or not, it hasn’t yet.” He explained that the United States’ oil production peaked in 1970 and that the world’s oil production will peak very soon. “Every oil well has a lifecycle,” he said. “Discovery, then beginning to pump—about halfway down pumping gets slower, producing less and less every day.” The peak is that halfway point, when pumping oil gets increasingly expensive. Eventually, our well will run dry.

Chris, Sandra and Peter display the “evacuated tube” made by Apricus, that comprises the panel. The vacuum created between the glass walls is the insulation that allows these tubes to function better than traditional flat panels in climates like N.H. The copper piece sticking out from the end of the tube in this photo is the heat pipe that transfers the captured heat into the manifold on the roof.

The solution will require a network of small, local solutions. Some are already in the works, like solar, wind and water power, buying food locally so that it won’t have to be shipped or growing your own food, replacing some oil use with biodiesel or ethanol. Buckley, for instance, thought of sharing his car with several other owners, each one contributing to its operation and upkeep, and driving only when they really need to. “There are solutions we haven’t even thought of yet,” Adams said. “So that’s what we were born out of: Can we get people to use solar, to work together?”

The group’s primary purpose is to educate people and help them plan for their energy futures in the same way that they plan for their financial futures. “We wanted to create options,” Adams said. “We started by learning about one option to create energy—solar energy. One thing [renewable energy] does is empower us. I can’t drill for oil under my house. But I can create hot water or electricity from the sun.” This is especially important in New Hampshire, which is not the sunniest state in the union and has few solar power distributors.

That problem led PAREI members to become distributors. After much research, they chose Apricus solar hot water collectors. They like the Apricus system because it comes in small sections—none heavier than 10 pounds—which makes it easier to install, has well-insulated tubes that transfer the sun’s heat in the winter as well as the summer, and can collect solar energy even when the sky is cloudy. The systems make hot water for personal use, supplementing the homeowner’s existing water heating system rather than replacing it, reduce water heating bills by 60 to 80 percent, and save over 4,000 pounds of carbon emissions per year. They also provide energy security, by reducing dependence on oil.

“People interested in using the sun’s energy who want to have a system installed are encouraged to become members first,” said Jones. “PAREI will teach members how to install the system themselves, or they can hire the PAREI crew to assist them, or they can take part in the ‘energy raiser’ process. Energy raisers are modeled after barn raisings, following the tradition of neighbor helping neighbor. Homeowners help out at two energy raisers prior to their own, and then pay the favor forward once they’re trained and knowledgeable. Volunteer installation means the system ends up costing 30 to 50 percent less than it would elsewhere. Coupled with the new federal tax credit of $2,000, installing solar suddenly becomes more affordable.”

Involving homeowners in the installation helps them understand how the system works so they can troubleshoot any problem that might arise. “We want the owner to know everything about the system,” Adams said. “In the 1970s, people would have an installer put in the system and when it leaked, they’d rip it out because they didn’t understand it.”

The word is getting out in the Plymouth area community. Over the summer of 2006, PAREI scheduled more than twice the energy raisers than were completed in the previous year.

“This plan lets the little guy know and understand the basic principles,” Adams said. “This will eventually benefit the larger solar companies, plumbing contractors, all kinds of people.” In fact, plumbers, electricians and other trades people already attend the energy raisers to learn these systems as well.

In October 2005, PAREI received the Gauntlet Award from the U.S. Department of Energy’s Million Solar Roofs (MSR) Partnership program. This award is presented annually to the MSR partnership that has “demonstrated success, despite many barriers, obstacles and setbacks, and has worked in an area with few or no incentives, political support or resources.” An “energy raiser” in action. PAREI members pitch in to install a solar water heating system.

Richard Michaud, MSR coordinator for the DOE’s northeast region, said, “PAREI approached the existing MSR partnership in the state, the New Hampshire Office of Energy Planning (OEP), with a proposal to demonstrate that a local group like PAREI could promote solar in the Plymouth area. With the encouragement of New Hampshire’s OEP, PAREI formed an alliance with the recently created N.H. Sustainable Energy Association (NHSEA).” PAREI continues to work alongside that organization promoting their statewide goals and events in the Plymouth area.

Other PAREI activities include the Energy Exchange, social gatherings where PAREI members get together to talk about energy issues and renewable techniques. Here, members get a chance to meet one another and benefit from their collective knowledge. “One of our major goals when we started the Energy Exchange initiative was to identify and develop a local knowledge base about energy issues. We now have a list of members willing to meet with other members one-to-one to share what’s working in their homes, be it an outside wood boiler, net-metered solar electric system or a homemade solar water heating set up,” explained Jones. Adams was surprised at first by how many members show up for these events, and that they are so enjoyable they often last until the wee hours. PAREI also conducts “energy assessments,” to help people understand how much energy they are using and what steps they can take to conserve.

Bill Crangle, vice president for finance at PSU, was one of the first PAREI members. “I’ve always been interested in the environment,” he said. “I recycled back when I was in college in the 1960s, before it was fashionable! So when the group came about I wanted to help make sure they were successful.”

Crangle tells how the University and PAREI “try to work together for that bigger goal of environmental awareness.” The group has co-sponsored speakers at PSU, such as author Richard Heinberg, who gave the talk “The Party’s Over: Ramifications of the Coming End of Oil” as part of the Saul O Sidore Lecture Series in April 2006. PAREI always has an exhibit table on campus for Earth Week, and has had a member on the PSU environmental committee, thus playing a vital part in planning Langdon Woods, Plymouth State’s new “green” residence hall. Members have also served as panelists for roundtable discussions on alternative energy and conservation, and transportation options and issues.

PAREI is committed to working only in its own local area. Adams said that it would not make a lot of sense for them to drive all over the state to talk about conserving oil. But they are involved with other groups in other communities, providing information and ideas, and maintain a Web site, which can spread the word even further.

“We’re trying to create a model, a syllabus, of what we did and how we did it,” said Adams. “So you can have 12 people over to your house and show them how to do it. Then they invite 12 people, and so on, and so on.”

Listening to Plymouth's Past 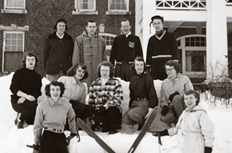 Listening to Plymouth's Past

PSU students learn about the institution's "good old days" from the people who were there. by Kristin Proulx Jarvis What...
Copyright 2013 Jupiter Premium Magazine Theme
Back to top