A gift from anthropologist and art collector Hans Guggenheim combines art and education with a powerful tribute to a lifelong friend.

Vincent Van Gogh’s “The Starry Night” is one of the most famous and well-beloved paintings in the world. Many people admire the painting without ever having seen it in person, and appreciate it without knowing the context of its creation. But just think how that admiration and appreciation could be enhanced by experiencing the painting, with its violent, thick brush strokes, in person at the Museum of Modern Art in New York City. Or by knowing that Van Gogh painted the iconic landscape from his room in an asylum in southern France, where he committed himself following a breakdown. Or by being aware of the prevailing theory among critics, scholars, and art historians that the painting was heavily influenced by Walt Whitman’s poetry, particularly “Song of Myself.” 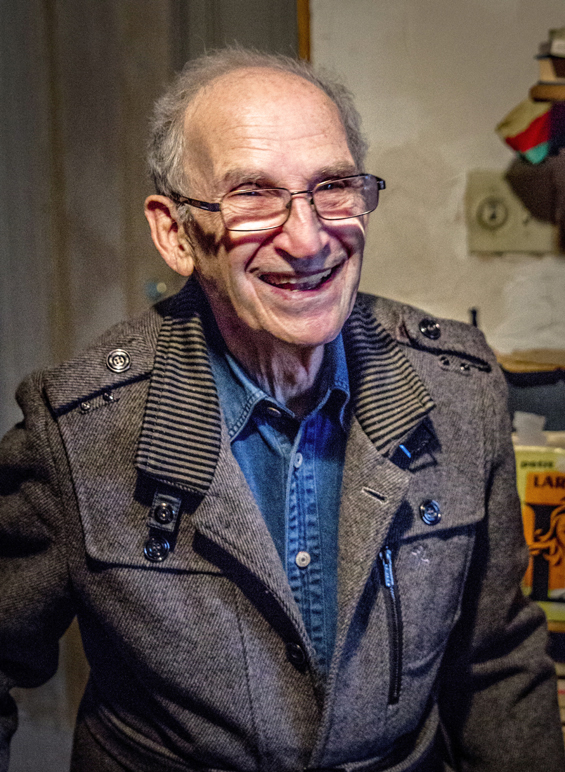 Experiencing a work of art first-hand and understanding the cultural and historical context in which it was created can increase one’s appreciation of art, and this is the thinking behind a multifaceted gift to PSU from world-renowned anthropologist, artist, and humanitarian Hans Guggenheim. The gift is allowing PSU students to experience works of art from Guggenheim’s private collection on campus, learn more about the artwork by attending lectures by Guggenheim, and delve into the context of the artwork in class.

The catalyst for this gift was Guggenheim’s initial gift of four prints, which he gave to PSU last summer in loving memory of his lifelong friend, the late Thomas Schlesinger, professor emeritus of political science. The prints are of etchings by the nineteenth-century Spanish painter Francisco de Goya Lucientes, from Disasters of War, a series in which the artist unflinchingly depicts the horrors and consequences of war he witnessed during the Napoleonic invasion of Spain.

Artwork that features such grave and unsettling subject matter may seem an unusual way to honor a friend, but Patricia Powers Schlesinger says Guggenheim’s gift is a fitting tribute to her late husband. “The Goyas are a protest of war,” she says. “Tom would be thrilled [with this gift] because it is absolutely in accordance with his beliefs and his efforts to promote peace, understanding, and communication to resolve conflict.”

Both Guggenheim and Schlesinger experienced their own disasters of war as boys and young men in the 1930s and 40s, disasters that would shape the course of their lives.

History
In 1935, 9-year-old Hans Guggenheim met 8-year-old Tom Schlesinger at the Zickel Schule, a school in Berlin for Jewish children. “He was a very lively kid and we became best friends almost immediately,” recalls Guggenheim. The boys bonded over their shared love of sketching and playing chess. “We lived only a block from each other,” Guggenheim continues, “and after school, we would play chess together on top of my bookshelf in my parents’ apartment on Berliner Strasse.”

It was an ominous time in Germany. The Third Reich, with Hitler as absolute dictator, was beginning its reign of persecution against numerous groups, including liberals, socialists, communists, homosexuals, and especially Jews. They were expelled from civil service and universities, Jewish businesses were boycotted, and the Nürnberg Laws were enacted, stripping Jews of their German citizenship and making marriage and sexual relations between Jews and German citizens illegal. Little did young Guggenheim and Schlesinger know then that their days of sketching, playing, and attending the Zickel Schule were coming to an end.

The Schlesingers were the first to leave Germany, in 1936. “Tom’s mother had been very politically active as a young woman during World War I,” says Pat Schlesinger. “When Hitler came into power, she knew they had to get out.”

While the Schlesingers struggled over the next few years to find refuge from the Nazis, first by fleeing to Italy, then to Switzerland, and finally to the US in 1940, the Guggenheims remained in Berlin, enduring an increasingly hostile climate, until a fateful night in November 1938 made them realize they would be risking their lives if they continued to live there. Kristallnacht, or the Night of Broken Glass, was a horrific night of violence and destruction during which the Nazis and their supporters vandalized and looted synagogues, Jewish homes, and Jewish businesses. “After Kristallnacht,” Guggenheim says, “my parents sent me and my sister to England, where we attended a Quaker school near Cambridge.”

The peace and safety that Guggenheim found in Cambridge were only temporary. At the outbreak of World War II, the British government, concerned about enemy spies infiltrating the country, rounded up hundreds of Germans and sent them to internment camps. Sixteen-year-old Guggenheim was among those arrested in London and taken to an internment camp on the Isle of Man, located between Great Britain and Ireland. In 1940 he was released and taken to Guatemala, where he would be reunited with his family and discover his love for Mayan art and his own talent for painting.

Reunion
When World War II ended in 1945, Guggenheim, anxious to learn where his childhood friend Tom Schlesinger was, put an ad in the Aufbau, a journal for German Jews around the world. “I knew Tommy’s parents read it, and he responded immediately,” recalls Guggenheim.

The two friends reunited in New York in 1946, a decade after war had separated them. By then, Schlesinger had been in the US Army for three years, during which he trained at the Military Intelligence Training Center at Camp Ritchie, Maryland, and became one of the famed “Ritchie Boys”—an elite group of young men, mostly German Jews, who were trained in counterintelligence, interrogation, and psychological warfare. He helped break German resistance at the Battle of the Bulge and Remagen Bridge—two key battles that led to Germany’s defeat and the end of war.

Both men stayed in touch with each other for the rest of their lives. “I think they needed each other,” says Patricia Schlesinger. “They went through a very traumatic time. They may not have realized it then, but experiencing what they did gave them an impetus to make things better.”

In their own unique ways, Guggenheim and Schlesinger did make things better in the world. Guggenheim studied art history in New York and traveled the world for Life magazine as an artist and reporter. He spent many years in Mali, where he helped build small dams and grain storage systems to help the Dogon people endure a severe drought and learned much about Dogon religious traditions, mask dances, wooden sculpture, and architecture. He has been a professor of anthropology at MIT, and a visiting scholar at Harvard’s Center for International Affairs. A staunch advocate for arts and education, he founded Projectguggenheim in 1997, which provides art programming for young people and students in remote regions around the world.

Schlesinger had a distinguished 21-year career in the US Army, which included service in the Korean War, participation in the trenches during the atomic tests in Nevada, stints as interpreter to two generals, and service as a Green Beret instructor. During this time, he also earned his baccalaureate, master’s, and doctoral degrees, which allowed him to begin a second career as college professor when he retired from the army at the age of 42. He joined the Plymouth State faculty in 1970, and quickly proved himself a gifted and committed educator, dedicated to transforming his young students into citizens of the world. 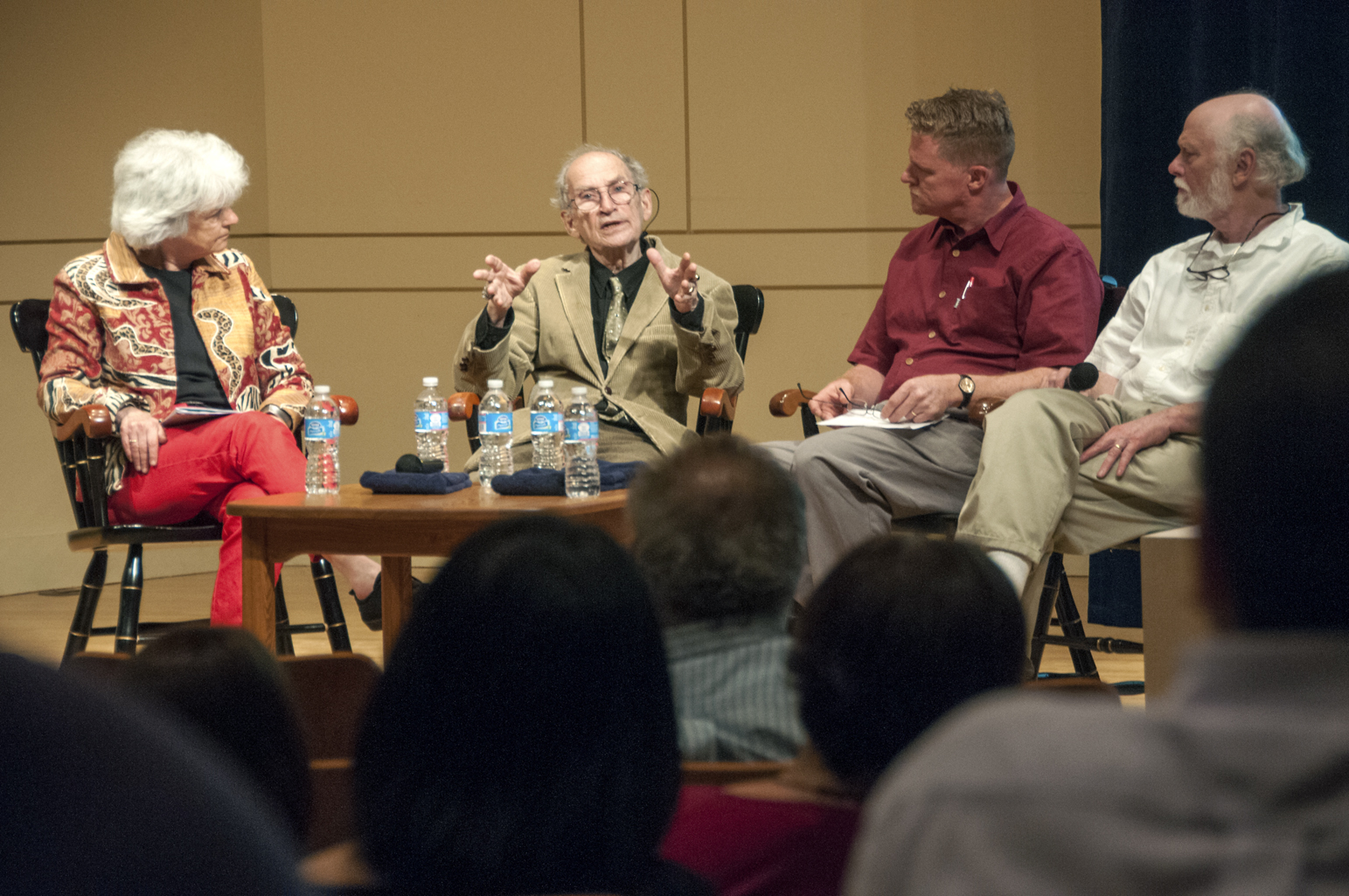 Following his presentation on Dogon art, Guggenheim was joined by Professor of Anthropology Kate Donahue (left), Professor of Geography Patrick May, and Professor of Art Terry Downs for a lively panel discussion. Jeremy Gasowski '01 photo.

Doing More
Dean Cynthia Vascak of PSU’s College of Arts and Sciences notes that, shortly after giving PSU the Goyas last summer, Guggenheim began considering ways to make the gift more meaningful. “In typical Hans fashion, he was looking to do even more,” she says.

And so, last December, Guggenheim gave a lecture on the Goyas at PSU, in tandem with the Disasters of War exhibition in the Karl Drerup Gallery. “He was marvelous,” recalls Professor of Art History Dick Hunnewell, who attended the lecture with his Art and Ideas in the Nineteenth Century class. “He has such wonderful insight, and as a trained anthropologist, he has an extraordinary sense of civilization and humanity. The students responded to his intelligence and sense of humor.”

Inspired by the interest and enthusiasm of students and faculty during the Goya exhibition and lecture, Guggenheim proposed future exhibitions of art, which would be loaned from his personal collection, and lectures to be offered over the next three semesters, up to and including spring 2014. “As we began planning these exhibitions and talks, we thought about how to make this interdisciplinary,” says Vascak, who contacted Hunnewell and Professor of Anthropology Kate Donahue for their input.

Donahue and Hunnewell met with Guggenheim last fall. Hunnewell says, “Kate and I suggested that Hans outline the works he’d like to exhibit and the lectures he’d like to give.”

As it happened, Guggenheim’s vision for future exhibitions and lectures, featuring the artwork of the Dogon in Mali; traditional paintings and bronzes from China; and artwork from Guatemala complemented courses that Hunnewell and Donahue regularly teach, such as Hunnewell’s Art and Ideas of the Nineteenth Century and Art of the Far East courses, and Donahue’s Religion, Ritual, and Myth course.

“This is a wonderful opportunity for the students,” says Donahue, “to be exposed to Hans, an anthropologist who has lived and worked all over the world, to interact with art from his collection, and to learn more about the cultures that influenced those artworks in class. I’m grateful and delighted that this has come about.”

For Guggenheim, this multifaceted gift to PSU is an expression of who he is and his belief that the power of art transcends the visual. Experiencing art and art education helps promote understanding and appreciation among people and cultures, which Guggenheim says “is essential to our education for living in a complex world. The language of art synthesizes cultural wisdom and the human experience that is not accessible in any other form.”

Editor’s note: For more on the extraordinary life of Thomas Schlesinger, and the endowed scholarship Patricia Schlesinger established in his memory at PSU, read “The Education of a Teacher” in the Fall 2012 issue of Plymouth Magazine.

Welcome to the Spring/Summer issue of Plymouth Magazine, an issue that provides an introduction to today’s Plymouth...
Copyright 2019 Plymouth State University
Back to top