The Education of Leo Sandy 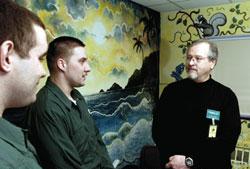 Corey LaPlaca and Shawn Hoisington chat with Leo Sandy after class at the Family Connections Center housed in the Lakes Region Facility. Photo by Alan MacRae.

Some of Leo Sandy’s favorite students are behind bars. Once a month, PSU Professor of Counselor Education Leo Sandy presents one of 21 different parenting workshops to the inmates at the Lakes Region Facility, a medium-security state prison in Laconia, N.H.

The workshops cover a wide variety of parenting issues, from ages and stages, to conflict resolution and problem solving, to how to move beyond corporal punishment, to bullying, to fathering. They are offered as part of a parenting program sponsored by the Family Connections Center at the Lakes Region Facility. The facility housed both men and women until July 2004; now all the inmates are male.

Sandy joined the program a couple of years ago. He explains, “I was talking with Barbara Hunter, who was with UNH Cooperative Extension, and I told her that I had always been interested in doing volunteer work in prisons. She suggested I call Kristina Toth over at the Family Connections Center.” Sandy’s ideas for workshops complemented Toth’s existing program well. He notes that he is able to repeat workshops in a regular cycle since inmates at the Lakes Region Facility rarely stay as long as three or four years.

“They’re excellent students,” Sandy says of the inmates. “They remind me of grad students, actually. They’re very attentive, they ask a lot of questions, they give a lot of examples. They’re right with you. … And usually when I finish, they all come up to me one by one to shake my hand and thank me for coming. That’s pretty gratifying. Grad students don’t even do that!” he adds, with a laugh.

Toth, Family Connections Center program administrator, recognizes the importance of parenting education for this population. “Anytime you talk about inmates in prison, people start to look away or say, ‘don’t give them anything.’ But what they don’t realize is that they’re also parents—and if they don’t learn these parenting skills, there is a child who’s going to take his dad’s place in prison. These children are the truly innocent ones.”

Toth says Sandy has developed a regular following. “They love him. They come to his classes whether they have a child that age or not. It’s very important to them to have a male role model who is so interested in parenting. They think he’s a really cool guy. They can connect to him. Some of them were concerned that he’d look down on them as ‘bad dads’ for being incarcerated, but they didn’t get that from him at all.”

Sandy lets his undergraduate and graduate students at PSU know that they are welcome to join him if they have an interest in that kind of volunteer work, and several have already participated.

“I like to have students come,” says Sandy. “I think it’s good for the residents of the prison to relate to other people. I think it may be even more beneficial to students to see that these people are people, not labels. These are human beings who have made mistakes, but they’re still human beings and they’re very much like the rest of us. It’s a big eye opener.”

Sandy also offers parenting and other workshops through area schools, child care centers and service agencies such as the Whole Village Family Resource Center in Plymouth.

Leo Sandy’s work with the Laconia prison stems from his deeply held beliefs in service, peace and nonviolence, beliefs that are reflected in his PSU courses and personal life, as well. He says his grandmother, who raised him while his parents worked, taught him tolerance during the era of Joseph McCarthy and cowboy-and-Indian television shows. “She said the Russian people and Native Americans were good people. I believed her then and I still do. I now refuse to allow anyone to define my enemies for me.”

Sandy recognizes that he is a man of some inherent contradictions. He says, “There’s a scrapper in me, but there’s also a peacemaker. Those are always at war with each other.” The biggest contradiction may be his relationship with the military.

Raised in a tough neighborhood in Lowell, Mass., with a tendency to skip school and get himself into trouble, Sandy dropped out of high school at the age of 16. He ended up joining the Navy “to get off the corner.” He recalls, “All the kids I hung around with, we were all lower class kids. … So the military was the only place to go. College wasn’t even on the radar screen.”

After four years in the Navy, Sandy was inspired to return to school by a computer programmer he met while working in the mailroom of the Mitre Corporation (“a huge military think tank”). “He kept telling me to go back to school, go back to school, every time I saw him. It got to the point where I’d look to see if his back was turned and drop the mail and run so he wouldn’t bother me anymore!”

Three years after marrying his wife, Pearl, Sandy enrolled at a prep school for a year, but again left without graduating.

But as a veteran, Sandy was entitled to enroll in any land grant university, regardless of whether he had a high school diploma. Four years later, he had a bachelor’s degree in psychology from UMass Boston and was ready to start his master’s degree at Boston University.

Sandy describes his life up to that point as “totally apolitical.” But at UMass he took a course from Gene Sharp (now a senior scholar at the Albert Einstein Foundation in Cambridge, Mass., and a leading expert in the field of nonviolence) called “Resistance, Rebellion and Revolution.” The course, which covered nonviolence from 450 B.C. to the 1960s, helped Sandy conclude that Gandhi was right when he called nonviolence “the most powerful weapon ever devised by mankind.”

This was when the Vietnam War was starting to escalate. Sandy went to marches and teach-ins, but what really swayed him was encountering soldiers who had been there, speaking out against the war. “These guys were sergeants, they were combat infantry, they were officers—all branches of the service—even a Marine general said that we were in Vietnam primarily to test weapons systems to see how they worked on real people. This was a career general!” These were the protesters who caught his attention. He joined the anti-war movement, and never left. Today he is a proud member of Veterans for Peace and New Hampshire Peace Action, among other organizations.

Once his master’s degree was completed, Sandy planned to become a school psychologist—a profession he has followed since 1972 and still does, one day a week, for the Inter-Lakes school district.

A fluke led him into college teaching. Or rather, the flu. While pursuing his master’s degree, Sandy also needed to support his growing family, so he worked as a substitute teacher and delivered appliances on the side. He was fired from his appliance-delivery job for catching the flu during the Christmas rush. He needed to make up that lost income and cast around for something he could do.

“I figured I could teach an Intro to Psych course,” he recalls. “I went up to Rivier College and other places and applied. They all said, ‘No openings, no openings.’ Then I got a call from the dean at Rivier who said they might have a class for me and could I come up that afternoon? So I thought, ‘Intro to Psych, here we go!’ and then she tells me it was History and Systems of Psychology—which I got a B in as a gift—it studies Plato all the way up to the current psychologists.” The course was for nine honors psychology majors. “I’m thinking to myself ‘No way!’ and I told her ‘No problem!’” Sandy laughs.

The course was such a success that Sandy was asked back and taught part time at Rivier for many years while working full time as a school psychologist. After returning to Boston University for his Ed.D., he swapped those roles and eventually rose to be a tenured full professor at the Nashua, N.H., college.

He felt at home at Rivier, which in 1995 formally recommitted to its mission of service and social justice. But after 12 years of commuting 140 miles a day from Gilford, Sandy decided to take a risk when he was invited to apply for an untenured associate professorship at Plymouth State. Eight years later, he is a tenured full professor again. He also serves as coordinator of both the School Psychology Conversion Program and the Parenting Education Certificate Program for PSU’s M.Ed. degree program.

Education is starting to run in the Sandy family. His wife, Pearl, has been teaching since the mid-1960s and now runs a small private school in Meredith. Daughter Kirstie is an associate professor of English at Keene State College. Son Karl is finishing a doctoral program in pharmacy in New Orleans and is married to a marketing professor. Sandy’s parents are no longer alive to see this change in their descendants, but he doubts they would understand it. “Neither of my parents finished school. They were both mill workers, probably beginning when they were 15 years old. So it would not be comprehensible to them. I’m not even sure if they would think it was really positive!”

Sandy is still fighting the good fight. He was instrumental in making service learning part of the Plymouth State curriculum. “I think that students should contribute to their society, and I think that even more important is that while they’re doing it, they’re learning,” pointing out that students tell him how the experience boosted their confidence and that they will often continue their service even after the course is over.

In three classes, he is also showing both graduate and undergraduate students their own potential as advocates through the simple expedient of letter writing. “They have their choice of what they want to advocate for … I’m not going to tell them what to write. I’m just going to tell them that if you have a belief or principle, and you want to help kids or veterans or old people, there’s got to be something out there you’re willing to write a letter about.” Students can write to local, regional or national newspapers or magazines, or to their congressmen. “I think that requirement is very civic minded,” Sandy continues. “I think college courses can be, in a sense, moral places. At least the subjects I teach lend themselves to that.”

The conflict between scrapper and peacemaker extends to the classroom as well. Sandy believes in using provocation as a pedagogical tool, to make students think about and evaluate their own assumptions, although he is careful not to require them to agree with him. “Unless you create dissonance, you can’t have cognitive restructuring,” he believes. “You have to actually make someone upset or conflicted in order for them to reconfigure the way they see something. That’s the challenge. How do we provoke and yet, at the same time, not turn off?”

Leo Sandy is indeed a man of contradictions. His military service gave him the opportunity for the education that showed him the potential for nonviolence; his respect for soldiers led him to the peace movement; the “scrapper” in him provokes his students, colleagues and university administrators because the peacemaker in him is fighting to make the world a better place.

A Good Use for a Million Dollars 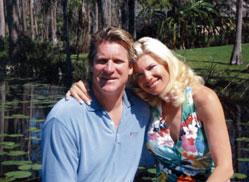 A Good Use for a Million Dollars

by Angela Matthews It takes teamwork to make a marriage. Just ask John ’85 and Carrie Morgridge. From workday to family...
Copyright 2019 Plymouth State University
Back to top