The Power of Service 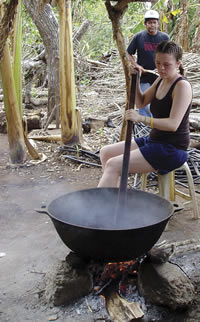 Jessica Chisholm ’09 knows that service work can benefit communities, build new relationships among people from diverse backgrounds, and look good on a résumé, but that’s not why she spends her free time volunteering. “Community service is what I do for fun,” she says.

Chisholm already had years of service in her background when she transferred to PSU as a sophomore biology major. Growing up in Lexington, MA, she had spent much of her free time volunteering both at an assisted living home for seniors and with the Best Buddies program, where she worked with disabled students and helped with the Special Olympics.

When she arrived on campus, Chisholm discovered PSU Volunteers, a student organization that helps create volunteer programs and promotes service at the University. She worked on Habitat for Humanity projects and at the Squam Lakes Natural Science Center, where, after more than two years of volunteering, she has been granted the highest level of animal care responsibilities and recently helped train a red-tailed hawk.

A trip to Nicaragua in 2007, though, provided Chisholm with a new appreciation for the power of service. Chisholm learned of the Nicaragua Club, an educational club that promotes cultural awareness and provides students with service opportunities in Nicaragua, through a friend who was the club’s treasurer. “I had never been out of the U.S., and I wanted to broaden my horizons,” Chisholm says. “I had no idea what I would see, and I was nervous about being dropped into a country without knowing the language, but the trip was amazing—it made me realize how much we have, and it helped me value people even more than I already did, especially family. Family is everything in Nicaragua.”

During the trip, the students spent a week in La Paz Centro and a week in Managua. La Paz, Chisholm says, is a little town with a church in its central square and brightly colored houses all around. Much of the students’ time during the first week was given to Spanish lessons and cultural awareness activities, but there was also plenty of time to play soccer with kids and games of Uno with their host family.

In Managua, the Nicaragua Club worked with Women in Action (WIA), the main project of Compas de Nicaragua (Friends of Nicaragua) a nonprofit organization for which PSU alumnus and former Nicaragua Club member Michael Boudreau and his wife, Ana Narváez, serve as field directors. The club and the WIA members—a group of 40 women who organize health and education projects in the barrio of La Primavera—worked together to build chicken coops, paint a mural, and practice the traditional Nicaraguan art of gourd carving, which has become a vital source of income for women in La Primavera.

Most significantly, Chisholm and her peers had the opportunity to live with Nicaraguans, learn about Nicaraguan culture, and teach their hosts about American culture. Though the language barrier was difficult to overcome at first, Chisholm discovered skills of gesture and communication that she never imagined she possessed. Chrisholm At work in Nicaragua. Photos courtesy of Jessica Chrisholm.

“The people of Nicaragua are amazingly generous,” she says. “There’s a lot for them to overcome—this is a place where many people don’t have indoor plumbing, and kids run around playing in polluted rivers and trash. But there’s a wonderful spirit to the people, and it made me realize how much we value objects over what we should value, which is each other.”

Chisholm’s experience in Nicaragua was profound, and upon her return she continued working with the Nicaragua Club, becoming its president last year. The club is now planning another trip, with eight students—Chisholm included—preparing to go.

However, as Chisholm points out, PSU students and community members don’t need to travel far for volunteer work; service opportunities abound on campus and in the community. “If there’s something you like to do, there’s a service project that will let you do it,” she says. “If you like building, there’s Habitat for Humanity.  If you like animals, there’s the science center. If you like kids, there’s the Pemi Youth Center. There really is something for everybody.”

After she graduates from PSU in the spring, Chisholm hopes to find employment in a college residential life program, which would allow her to keep working with people. Ultimately, she sees medical school in her future. In the meantime, she’ll continue her service work. “I’d like to continue working with animals somehow,” Chisholm says. “And a friend and I are beginning to plan a research project in Africa.”

Given her interests, it would be no surprise if, 10 or 20 years from now, we find Chisholm working in a corner of the world quite distant from Plymouth State University, helping people and learning from them.

Matthew Cheney is an adjunct faculty member in English and Women’s Studies at PSU. His writing has appeared in a variety of publications in the U.S. and the U.K., and he is the series editor of the Best American Fantasy anthologies from Prime Books. 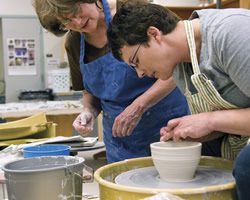 by Betsy Cheney '89, '99G, photos by John Anderson In the dusty industrial-looking pottery studio tucked into a back corner...
Copyright 2019 Plymouth State University
Back to top