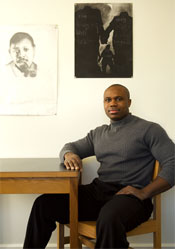 He Will Never Forget He was 12 years old when the soldiers came.

Kingsley Kabari is a member of the Ogoni people, from the oil-rich delta of the Niger River in Nigeria, Africa. After over four decades of drilling by Shell and other international oil companies, leaking oil from old equipment has poisoned Ogoniland.

“This was particularly difficult because the people depended on farming, fishing, and hunting for survival,” Kabari said. “Billions of dollars worth of oil have been extracted from the environment, but the people are living below poverty.”

There was world-wide outrage and condemnation of the Nigerian government following the execution of Ken Saro-Wira, an important Ogoni writer and human rights activist, and eight other activists on Nov. 10, 1995. The Nigerian government responded by raining down destruction on the heads of the Ogoni people.

The Kabari family barely escaped with their lives, and endured two years in a refugee camp in Benin before finally making their way to Manchester, N.H. Today Kabari is 23 years old and a student in the Department of Health and Human Performance at Plymouth State University. While many young people in similar circumstances want to put the past behind them and forget, Kabari remembers. He remembers, and he’s doing something about it.

His new life could hardly be more different from his old one. Kabari went from hunting for frogs, turtles or birds to supplement the family’s meager ration of rice in the refugee camp to scooping ice cream and serving burgers after school. In Nigeria he had only two years of formal schooling. Suddenly he found himself in a large American high school surrounded by people who couldn’t understand what he was saying. While other kids were worrying about the prom, Kabari was working 35 hours a week to help support his family.

After completing a semester at the Art Institute of Boston while working full time, the stress took its toll and Kabari withdrew from college. Back in Manchester he took a job at the YMCA. There he met one of the most important people in his life: Tom Lewry, CEO of Curbstone Financial Management, who became Kabari’s mentor.

“Tom treated me like a son. He took me under his wing and provided me with all kinds of assistance, from financial assistance to emotional support,” Kabari said. Lewry brought Kabari to PSU and encouraged him to apply. Today Kabari is making good grades as a physical education major with

an option in exercise physiology and a minor in biology.

He met Catherine Amidon, director of PSU’s Karl Drerup Gallery and Exhibition Program, while helping her with her exercise program. Their conversations ranged from diversity issues to Amidon’s work raising funds for Jamaica and the cultural heritage and artistic projects she has worked on, to Kabari’s desire to help the Ogoni people, especially the children.

“One thing I know is how to work with nonprofit organizations for developing nations,” Amidon said. “And this comes directly from the heart of our own lifestyles. Every time you fill up your car, some of that is coming directly from Ogoniland.”

With Amidon’s help, Kabari is starting a foundation, Niger Delta Net, to improve education, community health, and economic viability in the Niger Delta region. He is a student representative to the President’s Commission on Diversity and speaks to student groups about Nigeria. Niger Delta Net has put together a board of directors, and is holding its first fund-raising event in early February 2007.

“Tom Lewry gave me the vision to start this organization,” Kabari said. “I met him when I was at the lowest point of my life. He gave me hope. What he calls a little help, I consider big. It showed me that something little can change someone’s life. I started thinking, how can I multiply that love?”

Kabari notes that as little as 100 American dollars can lift a family in Africa out of poverty, if it’s used strategically. He added, “I try not to just talk. I want to do what I preach. I don’t want to make noise, but I want to get it done. When I met Catherine, she helped me bring that out.”

“The university has an amazing resource in having a student like Kingsley on campus,” Amidon said. “We talk about diversity and service. Kingsley’s aspirations for helping the Ogoni people, while still a student at PSU, truly embody those values.”

“To me, helping people is the best I could ever achieve. If I have all the money in the world and I don’t help people, everything I have would be worthless,” Kabari said.

“ I thank Tom and Catherine for helping make me who I am today and who I will be in the future, and most of all, Plymouth State University.”

To learn more about the plight of the Ogoni people, visit Amnesty International or read TED Case Studies: Ogoni and Oil . 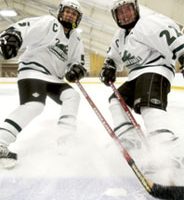