« Test Exhibition
From Isolation to Community » 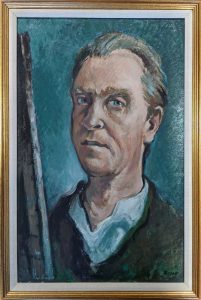 Karl Drerup (1904-2000) is one of Plymouth State University’s most notable artists and professors. His legacy and work lives on within the art community of the town, his life story resembles the American dream, and his artwork gives us insight into what life was like in both Plymouth’s past and in international art communities.

Karl Drerup grew up in Westphalia, Germany, studied drawing, engraved illustrations, and ultimately achieved a graduate degree in graphic arts in Berlin. In 1930, the conservative constraints of fascism drove him to enroll in the Royal Academy of Fine Art in Florence, where he studied and achieved a second graduate degree in painting. “He painted the people he loved, friends and colleagues; and self-portraits which seemed to be a kind of critical self-examination conducted at various stages in his life.”

Karl met and married his wife, Gertrude, in Florence. “As Italy fell to fascism, Karl and Gertrude knew returning to Germany was impossible,” as Gertrude was Jewish and Karl was designing anti-government posters. They moved to Tenerife, one of the Canary Islands and spent several years there. “By 1937, fascism had reached Spain and its islands. Gertrude escaped the Canaries before Karl, who boarded a cargo boat at night, and sheltered with friends in London until he was able to find passage to New York, where he reunited with Gertrude.”

Karl began making a living by painting vases and lamp bases for New York’s Fifth Avenue shops, and began studying and experimenting with enamel work. In 1940, the Metropolitan Museum of Art purchased its first Drerup enamel, launching Drerup’s reputation in the field. “By the 1950s his work had drawn a national audience and inspired other artists in the field of American enameling, metalwork, ceramics and glass.” During his time in New York, Drerup began his parallel career as a teacher. From 1942-1944, he taught drawing and painting at Adelphi College (now the University of New York).

In 1945, Karl Drerup became a United States citizen, and the Drerups moved to Plymouth, New Hampshire. After the move, Karl discovered the local college, Plymouth State Teacher’s College (now known as Plymouth State University), founded the Art Department, and taught here between 1948-1968. Drerup continued to exhibit his enamels nationally and to be the recipient of many awards. He often painted only in the summer or during vacations when as his teaching responsibilities grew.

In 1986, Karl Drerup was named a Living Treasure of New Hampshire, and the Karl Drerup Art Gallery at PSC was named for him. He passed away in 2000 at the age of 96.

Karl was a painter, most well-known for using enamel on steel, ceramics and canvas. However, he also produced many drawings and sketches, showcased in the 2010 Plymouth State University exhibition Karl Drerup: A Modernist Drawn to Life, as well as postcards and pictures from the Drerup family archives. 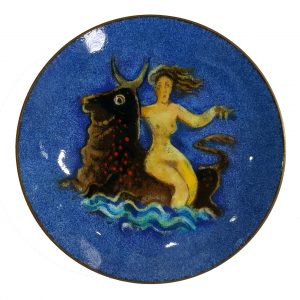 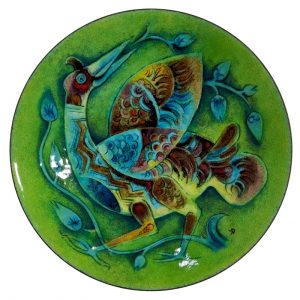 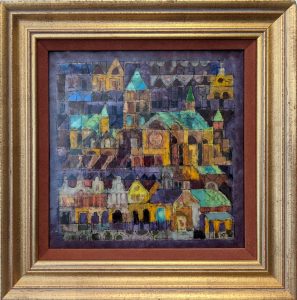 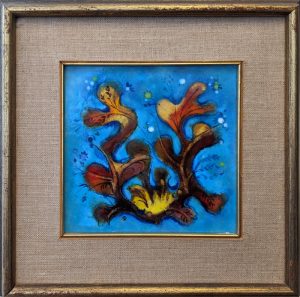 Website Created in Honor of Karl Drerup by His Family

Read More About Drerup and His Enamel Work