I never really started biking until last year. Biking is super fun, but with all of the equipment involved the sport comes across as intimidating for a beginner rider. My dad is a cyclist and quickly threw me into the sport with a bunch of our neighbors. They all nerded out on their carbon fiber, light as a feather bicycles, while I quietly followed on my old heavy steel frame 1989 Bianchi Volpe. 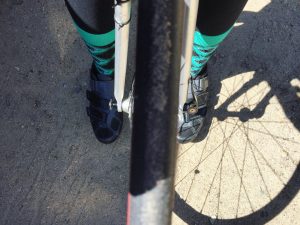 Riding in the White Mountains has its advantages because you quickly become acclimated to the high elevation, 9 percent grades, and some wicked typical New England weather. As the season went by, my speed increased and the rides got longer. So did the wait by everyone else at the top of the Kancamagus Highway. We all decided to make the 47-mile climb over the Kanc to North Conway. A friend on the ride was amazed, not only because I was the only female rider in the group to attempt the climb or that I just started riding last year, but that I did it on a steel frame. He thought it was “an absolute tragedy” that I was not riding on a lighter bicycle. A week later, an aluminum framed Specialized Allez showed up at my doorstep unannounced, asking to be ridden. That’s when I discovered hills were effortless when you’re not riding an absolute tank of a road bike. Who knew? 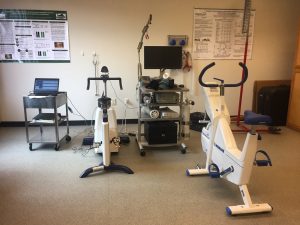 Two months passed and it was now early September. My biker gang decided to sign me up for a century ride in Middlebury, Vermont. The idea of a 100-mile bike ride was daunting, but as a Vermonter, any trip that meant spending time in the quaint, cow-filled Green Mountain State was a no brainer. At first, I thought a 5,000-vertical-foot ride would totally kill me, but compared to the climbs of the White Mountains, riding on the Vermont hills was a breeze. We started at 7 am and I finished at 2 pm, taking seven hours to complete the ride. I was again the only female and the least experienced on my team but, ironically, I was the first one to finish. Apparently, all of those laps on the Kanc paid off! 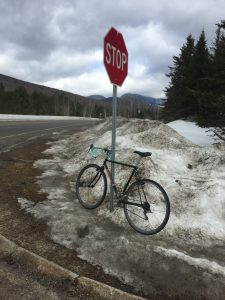 Feeling the need to be challenged I considered the idea of competing, so I checked to see if PSU had a road cycling team. To my surprise and disappointment, a road cycling club did not exist yet. Would I be able to start a club with the required number people? Road cycling is not exactly an attractive sport for college students. It is stereotyped as being a rich old man’s sport. Most people start road biking after they’ve graduated college, but I seem to be one of the few exceptions. Yes, the rides are long, steep, and straight, but nothing beats the adrenaline of going about 50 miles per hour downhill.

A few days after asking around, I got a call from the president of the Mountain Bike Club; the very last person this roadie expected to hear from. He was in Montana finishing up nationals that he and four other downhillers qualified for. Few minutes later, I was officially the co-president of PSU’s newly merged biking club. Surprise! It happened so fast I almost got whiplash. It turns out that a couple of the guys were interested in cyclocross, creating the perfect excuse to open the club up to roadies like myself. A roadie stumbles upon a bunch of downhillers and they’re surprisingly pretty chill with it. Not only am I the only road biker, but I am once again, the only female in the group. Sounds familiar, doesn’t it?

Throughout the entire process of learning to ride I have been surprisingly supported by male bikers with open arms. Biking is an intimidating sport and most women do not ever have the guidance and resources to start it properly. I have been incredibly lucky to have so many friends support my biking endeavors, but it’s time I give back. Yes, I am the only chick in the biking club, but there are some pretty awesome females on campus who are highly capable of starting the sport. All they need is a little confidence! Who knows, maybe one day, someone will be so inspired by their efforts that a beautiful bicycle will suddenly show up on their doorstep, just asking to be ridden. 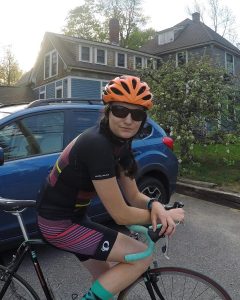 Samantha “Mac” Bevier ’19, from Rutland, Vermont, is majoring in Environmental Science & Policy with a certificate in Geographic Information Systems. She is picky about her maple syrup and B&J’s ice cream and loves running, snowboarding, biking, and encouraging other women to be active no matter their ability!