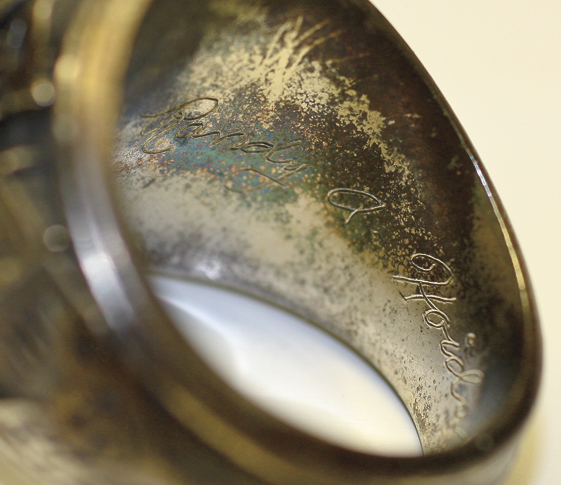 The ring, with a partially visible engraving.

“In the summer of 1973, a friend and I were tossing a football around in knee-high water at Lake Sunapee State Beach,” recalls Randy Hoidahl ’74. “The ring was quite tight on my finger; but when I went to catch a pass, the point of the football hit right at the base of my ring finger, and the ring flew off into the lake.”

Hoidahl was never able to find the ring and eventually resigned himself to ordering a replacement.

Eight years later, an 11-year-old Tim Byrnes and his father, John, had traveled from their home in Keene, NH, to spend the day metal detecting at the same beach. Father and son were about 15 feet offshore when their detector signaled an object. There, in three feet of water and buried under five inches of sand, they found a ring. They brought it home and put it in a box where it sat, forgotten, for 32 years.

Tim Byrnes, now in his forties, and his father had just picked up their metal detecting hobby again when they rediscovered the box containing the Plymouth State class ring. “My dad and I knew that we needed to try and return the ring to its owner,” says Tim. On June 19, 2013—two days before Alumni Reunion Weekend—Tim posted a message on the PSU Alumni Association Facebook page.

All it took was a photo, a few clicks of the mouse, and a phone call to Hoidahl to confirm that it was, in fact, his missing ring. 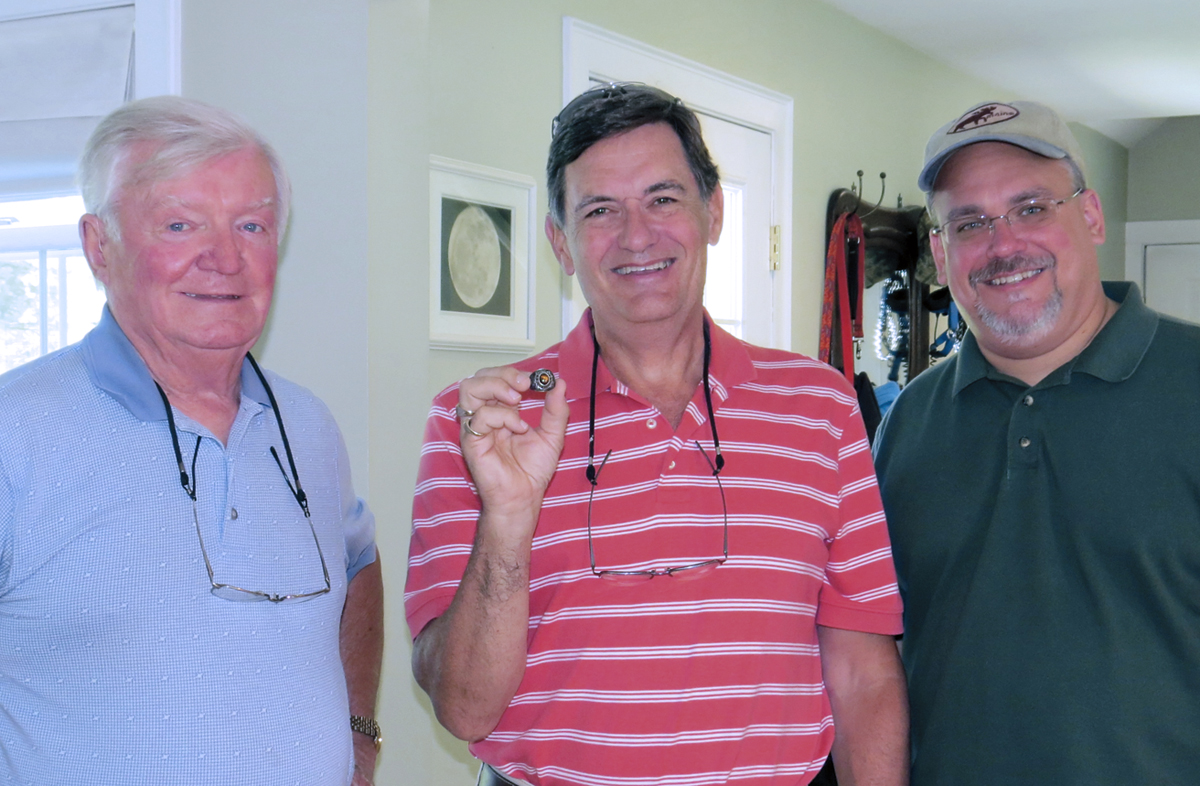 Randy Hoidahl ’74 (center) showing off his original class ring with its finders, John and Tim Byrnes.

Exactly forty years after Hoidahl’s ring flew off his finger and into Lake Sunapee, the trio met at the Byrnes’ home where father and son presented Hoidahl with his long-lost class ring.

“I think about the ring being underwater that amount of time and then sitting in a box for 30 years,” says Tim. “It was a great feeling to see the ring finally home.”

Of the entire experience, Hoidahl says, “It was rather strange because it was something that was gone from my life, an experience that I’d forgotten about. I’d bought the substitute ring. That Tim and John found the original ring—and the way in which it was found—it’s just amazing that my ring has finally found its way back to me.”

Coincidentally, Hoidahl will celebrate his 40th class reunion at Alumni Reunion Weekend June 20–22, 2014. “It’s hard to believe that it’s been 40 years. I’m looking forward to coming back.” And will he be wearing his original class ring? “First I’ll have to get it resized,” he says, “It’s been 40 years and my fingers are a little bigger than they used to be!”—Heidi Pettigrew ’99, ’07G, ’11CAGS

As our nation moves from an antiquated health care system focused on treating illness, disease, and injury to one focused...
Copyright 2019 Plymouth State University
Back to top