As our nation moves from an antiquated health care system focused on treating illness, disease, and injury to one focused on wellness and prevention, health care and fitness professionals are expected to lead the way. Here’s how three alumni from PSU’s Department of Health and Human Performance are ensuring safety in sport and exercise. 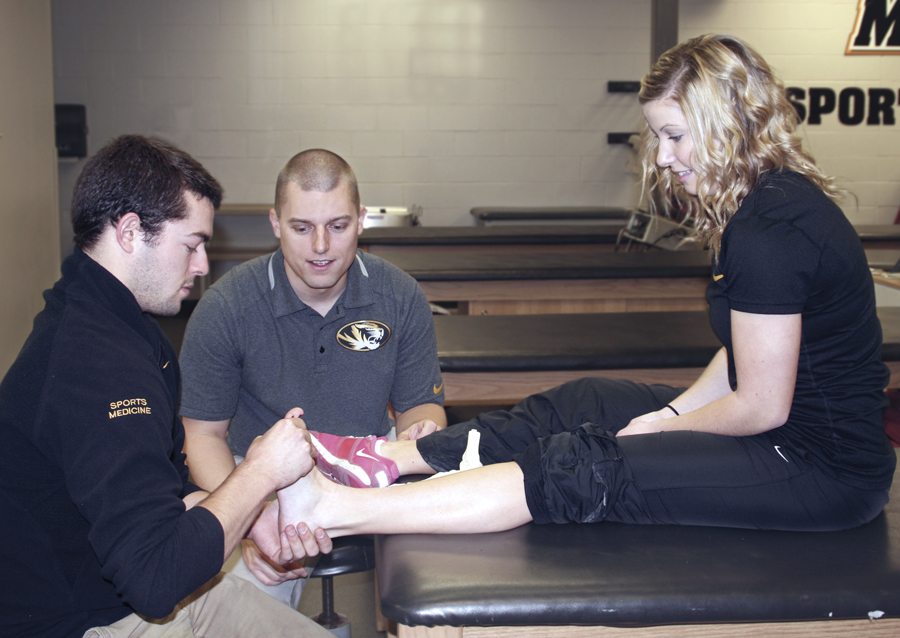 Keith Belmore ’05, (above center) an instructor at the University of Missouri, had numerous mentors in PSU’s Athletic Training Program, including Professors Linda Levy, Marjorie King, and John Rosene. “They all influenced me in different ways and contributed to my academic and clinical success.” Megan Gill photo.

Keith Belmore earned his bachelor of science in athletic training in 2005 and is currently a faculty member and clinical coordinator at the University of Missouri School of Health Professions. He oversees the clinical education component of the school’s new athletic training program, a responsibility that entails placing students in clinical sites and evaluating their performance, their preceptors, and the clinical site itself. He’s also responsible for a variety of administrative aspects of the new program, from curriculum design to student recruitment, and he teaches a course in the program. On top of this, he dedicates eight hours a week to working with student-athletes in a clinical setting.

Belmore believes that the connection between emotional and physical health is important and underestimated, and he is as concerned with his student-athletes’ psychological, social, and emotional needs as he is about their physical needs. “They identify themselves as athletes, so if they’re sidelined due to an injury or illness, that can affect their morale, their perception of themselves, and their emotional health,” he says. “That’s why we take a holistic approach and care for and treat the whole athlete.”

Belmore credits PSU with giving him a solid foundation in athletic training and believes his early hands-on clinical experiences were especially beneficial to his career today. As a sophomore, he had the opportunity to work with the men’s soccer team. “At a big Division I school, you don’t get that experience as early,” he says, noting that PSU’s smaller class sizes translated into more opportunities to work side-by-side with faculty. “At PSU, I was able to use the skills I learned in class right away—skills like wound care, taping, and therapeutic exercise. Starting to learn those skills early on with my clinical preceptor was invaluable to me.”

After earning his master of education in health education and promotion, Belmore did a one-year post-professional residency program at New Hampshire Musculoskeletal Institute (NHMI), a nonprofit cofounded by HHP alumnus Nick Vailas ’76 dedicated to advancing knowledge in musculoskeletal care and sports medicine and to promoting and providing a safe sports environment for athletes. “I spent my mornings on rotations with health care specialists in orthopedics, dermatology, ENT, primary care, and neurology,” he says. “In the afternoons I worked with the local high school and was head athletic trainer for an arena football team. It was an intensive year that blended academics and clinical practice.”

Wanting more clinical exposure for himself, Belmore accepted his current position at the University of Missouri, where he has struck a balance between being a clinician and an educator. He’s eager to conduct research projects on emergency management of athletes with spine injury, his research focus during his residency at NHMI. 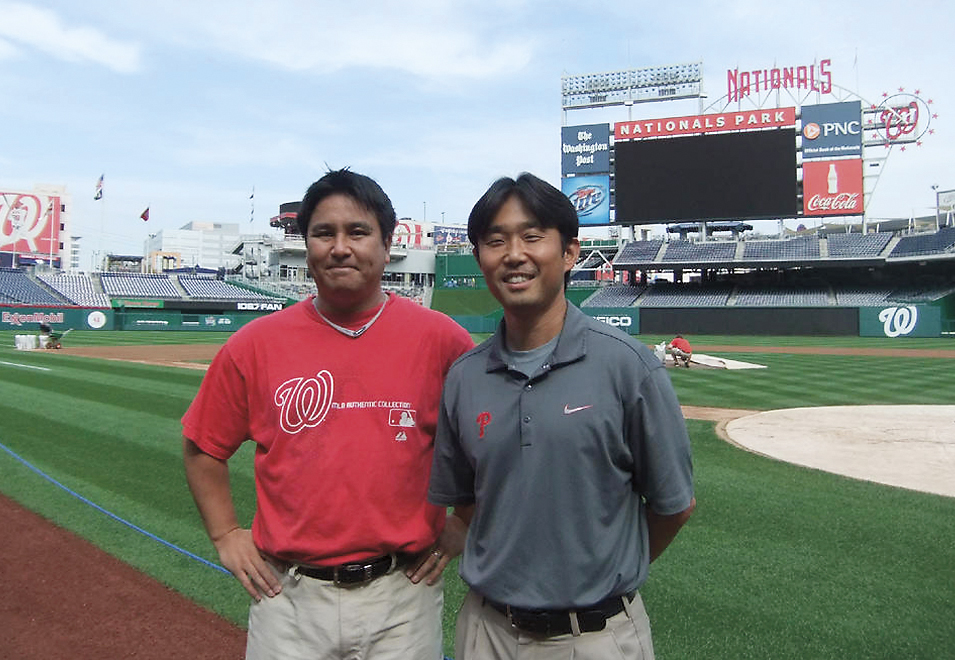 Major league alumni: PSU athletic training alumni Atsushi Torrida’03G (left) and Ichiro Kitano ’03G before a Phillies–Nationals game. Torrida is currently head athletic trainer for the Fukuoka SoftBank Hawks, a professional baseball team in Japan. Both Torrida and Kitano were graduate athletic training students at PSU and had an opportunity to work with the Concord Quarry Dogs before making it to the big leagues. John Hsu photo.

While Keith Belmore is helping to ensure the safety and well-being of student-athletes, Ichiro Kitano ’03G is doing the same for professional athletes as the manual therapy specialist for the Philadelphia Phillies baseball team. Manual therapy is a specialized form of physical therapy that incorporates specific soft tissue and joint mobilization techniques to promote tissue healing. Not only is manual therapy used to treat injury and reduce pain, it can also prevent injury by improving muscle flexibility and range of motion, reducing recovery time, and increasing blood flow. There are also tremendous physiological and psychological benefits to manual therapy, including relaxation and stress reduction.

Kitano earned his undergraduate degree in his native Japan, then came to Springfield College to learn English. From there, Kitano set his sights on earning a master’s degree in athletic training. “There were only a few schools in the country that offered an athletic training program at the graduate level,” says Kitano, who, like Belmore, appreciated PSU’s smaller size and numerous hands-on learning opportunities. His PSU athletic training education included rotations with the women’s soccer team and the baseball team. “PSU gave me many great opportunities to work with student-athletes in a variety of sports and settings,” he says. “I learned so much during my two years in the program.”

After he earned his master’s, Kitano did an internship at Brown University for an academic year. In the nine years since, he’s worked with baseball teams, first in the minor league, and for the past three years, in the major league. “My position is a little different than a regular athletic trainer,” says Kitano, who works with two traditional athletic trainers as part of a care team. “Ninety percent of my work is manual therapy, including massage, muscle release techniques, and working on soft tissue to prevent injury and speed up recovery. The other ten percent is more traditional athletic training work, such as caring for injured players on the field, assessing injuries, and rehabilitation.”

Kitano is pleased to see that more teams are recognizing the value in having a manual therapy specialist on staff. “It used to be that teams would have only two athletic trainers, and there wasn’t much focus on injury prevention beyond warm-up exercises and stretching,” he says. “Now, there’s a trend toward having three people on staff: two athletic trainers and a manual therapy specialist who work together to keep the players healthy and ready to play.”

Eric Wilson graduated from PSU in 2007 with a degree in exercise and sports physiology, and works with people of all ages who want to get fit and be healthy. After earning his personal trainer certification the summer after graduation, Wilson landed his dream job as a personal trainer at Boston Sports Club, where he worked for more than four years. “I’d put clients through an assessment to see the way they moved, what their fitness level was, and learn what their goals were.”

A year into his new job, Boston Sports Club hired a new fitness director, who changed the way the gym prescribed exercise. It marked a turning point in Wilson’s career and life.

Through the new fitness manager, Wilson learned about corrective exercise, a system of training that helps improve muscle imbalances and movement efficiency to decrease the risk of injury. “A lot of people who sit the majority of the day are tight in their hips and shoulders, and this throws off their movement pattern and kinesiology,” he says. “What we do is focus on flexibility and balance, and getting the body in a good position to work out, and teach our clients to do corrective exercise on their own. When they come in later, they are moving much better and we can go into a more aggressive resistance training or cardiovascular training program. With that knowledge, I felt that I was offering something unique to a wide level of clientele: older, younger, injured, non-injured, and people interested in losing weight or in building muscle.”

Wilson also experienced the benefits of corrective exercise in his own workout routine. “Nagging injuries started to fade away,” he says. “I didn’t realize how poorly I moved or how bad I felt until I started feeling better.”

In 2011, Wilson opened his own business, Movement Sciences, which is dedicated to teaching people corrective exercise. “I was able to bring a number of my clients with me, and many of them have kept their gym memberships,” he says. 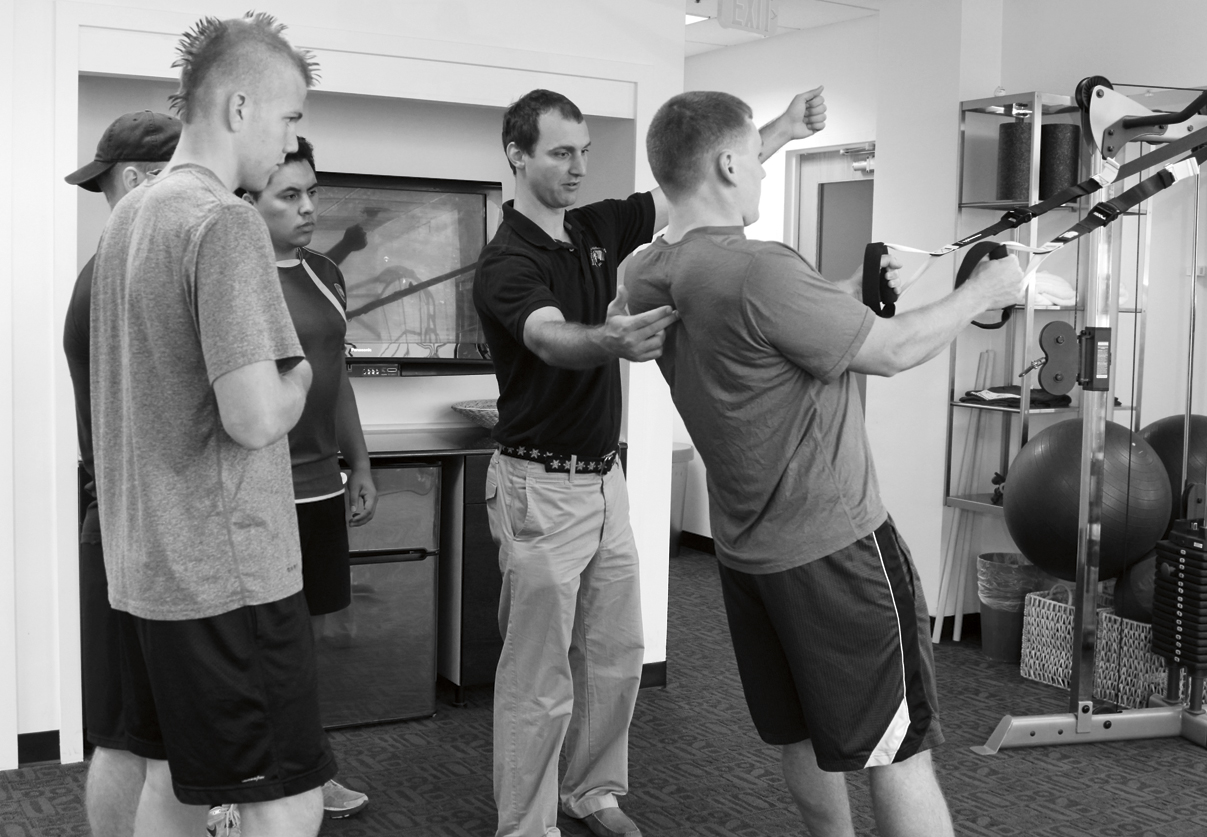 Now he’s also teaching other personal trainers about corrective exercise through his recently established American Center of Corrective Exercise and Personal Training (ACCEPT). Along with mastering corrective exercise techniques, Wilson’s students are required to earn their certification in personal training through the National Association of Sports Medicine, something that’s currently not required of personal trainers. “I’ve started this school,” says Wilson, “because there’s no accrediting body or agency that says you can or cannot be a personal trainer. There are no educational requirements, and poorly qualified trainers can end up doing more harm than good to their clients’ health. I saw a huge opportunity, a way to start bridging that gap. What I’m trying to do is seed gyms and personal training studios with highly trained and educated personal trainers who can help people realize the benefits of flexibility and balance in exercise.”

Although Movement Sciences and ACCEPT are relatively new, Wilson has high hopes for both of his endeavors, based on his current number of clients and students, and the emphasis our nation’s health care reform is placing on prevention and healthy lifestyles.  ■  Barbra Alan 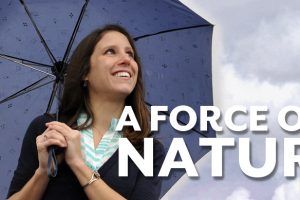