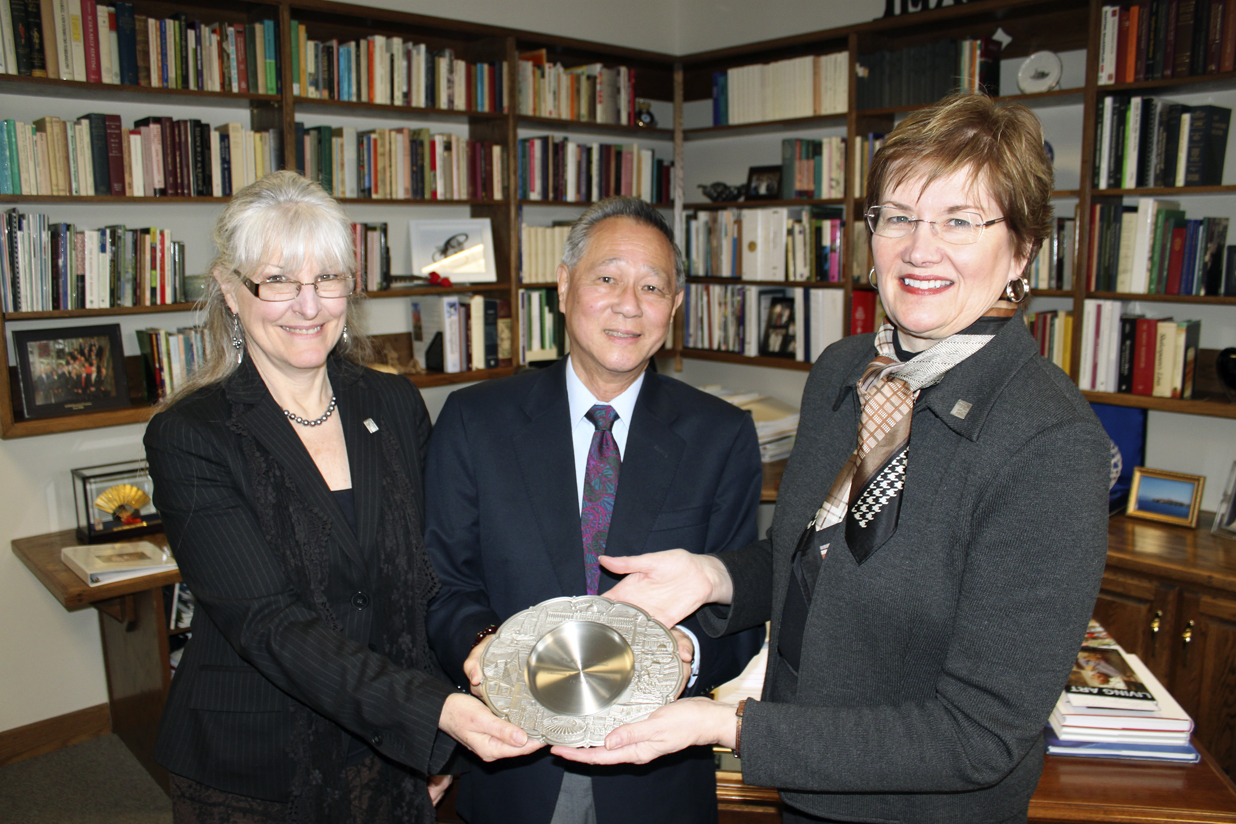 From left, Cynthia Vascak, dean of PSU’s College of Arts and Sciences, and Peng-Khuan Chong, chair of the Department of Social Science, present a gift plate from Universiti Tunku Abdul Rahman (UTAR) to PSU President Sara Jayne Steen. Vascak and Chong travelled to Malaysia in January and signed an agreement for collaborative projects that include research, faculty exchanges, study visits, and student exchanges between the two institutions. UTAR was established 10 years ago as a comprehensive university dedicated to excellence in teaching and research. The four-campus institution currently has more than 16,000 students. “This plate symbolizes a genuine partnership and exciting opportunities for students from both UTAR and Plymouth State University,” said President Steen.

Professor of Physical and Health Education Lynn Johnson and graduate student Morgan O’Connell ’10 of the Department of Health and Human Performance were honored by the American Alliance for Health, Physical Education, Recreation, and Dance (AAHPERD) at its national convention in Boston in March. Johnson received the Honor Award, which recognizes recipients for their personal integrity, devoted service to their professions, and outstanding and noteworthy contributions to the advancement of health, physical education, recreation, or dance. O’Connell received the Ruth Abernathy Presidential Scholarship, which is awarded to student AAHPERD members who have achieved academic excellence, showcased leadership in the profession of physical education, and shown a commitment to his/her school and community through professional activities or volunteer services. She will receive a $1,750 scholarship and a three-year complimentary AAHPERD membership.

Thanks to a five-year, $20 million grant from the National Science Foundation, researchers from the University of New Hampshire, Dartmouth College, Saint Anselm College, and Plymouth State University will collaborate on a statewide research and education project aimed at better understanding the environment and the complex interactions of the climate-ecological-human system. The project will also provide new education and training opportunities in science, engineering, mathematics, and technology that are necessary for a highly skilled state workforce to advance economic development and employment.

“A team from the Center for the Environment will be leading the development of a network of 100 water quality sensors around New Hampshire streams and rivers,” said PSU Professor of Hydrology Mark Green. “The sensors will measure water temperature, specific electrical conductivity, and water height … to provide us information about the hydrology of watersheds around the state. Data from these sensors will also allow us to understand the impact of human activities on the hydrology and water quality across many streams and rivers in the state. … This environmental data will be combined with data about housing and demographics; models based on this information will help policy makers determine the tradeoffs among different land uses, and will inform the development of strategies to adapt to the challenges of changes in land use and climate variability.” 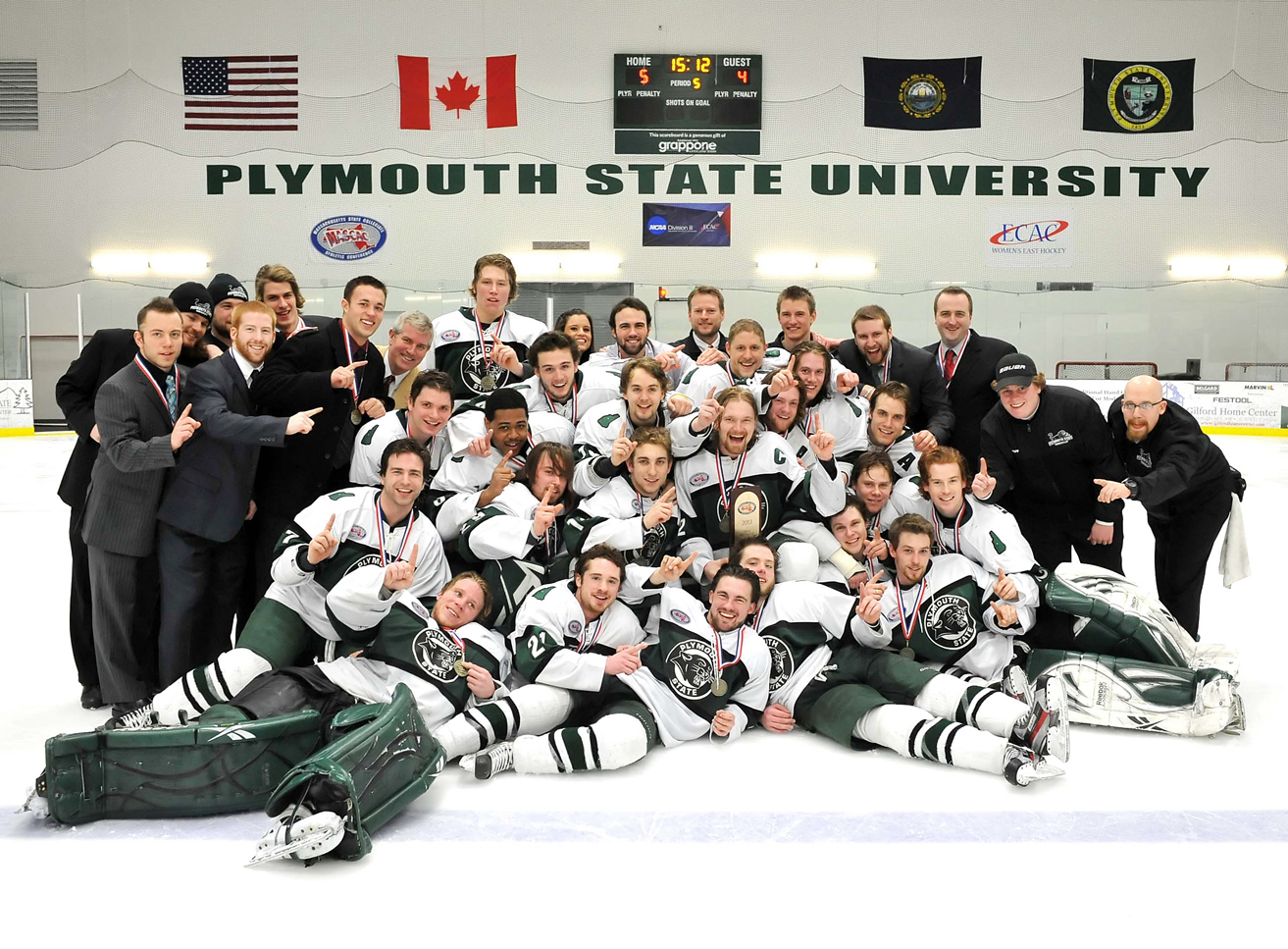 Plymouth State University has been named one of the nation’s top schools for encouraging community service among its students. PSU is one of six New Hampshire institutions of higher learning named to the President’s Honor Roll through the federal Learn and Serve America program, which supports and encourages service learning throughout the United States. Launched in 2006, the honor roll annually highlights the role colleges and universities play in enriching their communities and placing more students on a lifelong path of civic engagement by recognizing institutions that achieve meaningful, measurable outcomes in the communities they serve.

“This award recognizes the students who spend hundreds of thousands of hours working on behalf of the region, sometimes with projects related to courses and sometimes as volunteers, because they care about making a difference,” said PSU President Sara Jayne Steen. “And the PSU Community Service Center connects people at PSU with service opportunities in surrounding communities.”

A former student of a Plymouth State alumna has honored her teacher and mentor by creating an environmental studies endowed professorship. Janice C. Griffith, professor of law at Suffolk University in Boston, MA, established the Helen Abbott ’39 Professorship in Environmental Studies to honor her 4th grade teacher and lifelong mentor Helen Abbott for her influential role in her life, her considerable contribution toward public education, and her creativity and commitment in educating youth about environmental and ecological issues.

Griffith herself has been an extraordinary educator—a law professor, dean, and academic vice president—and national leader, whether in developing the plan to restore municipal solvency to New York City or holding significant positions within the American Bar Association. According to President Steen, Griffith’s generosity allows PSU to recognize and support the extraordinary faculty and academic excellence at Plymouth State. “With this generous gift, Janice Griffith assures that Helen Abbott’s story will be honored and that Plymouth State can recognize extraordinary teachers who are continuing that Plymouth State legacy.” 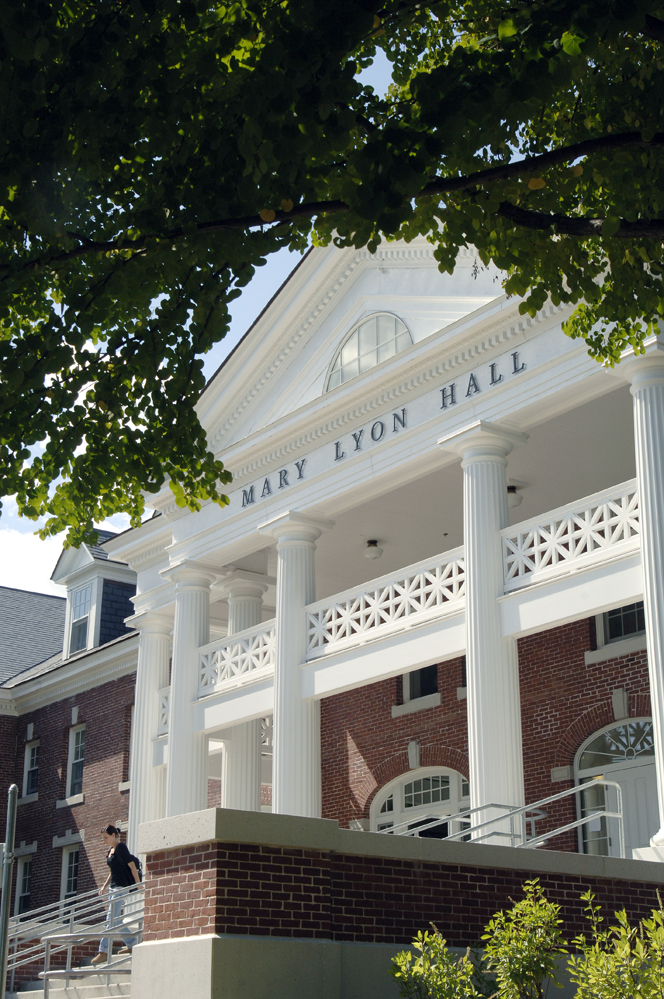 Hampshire State Registry of Historic Places. Mary Lyon Hall’s iconic brick face and tall white columns have held a special place in the hearts of those who lived there since it first opened in 1915. PSU Provost Julie Bernier said the designation is a well-deserved acknowledgement of the University’s oldest and best-known residence hall.

“It’s a fitting tribute to New Hampshire’s first normal school,” said Bernier. “Mary Lyon Hall is a classic building–the perfect vision of ‘college in New England.’ I’m so pleased that the work of Linda Corriveau ’11G and the graduate faculty in historic preservation has resulted in this addition to the registry.”

When it comes to career highlights, Ann Widger's is hard to top. After all, how many people do you know...
Copyright 2019 Plymouth State University
Back to top