On the Mark: ALLWell North at Plymouth State University 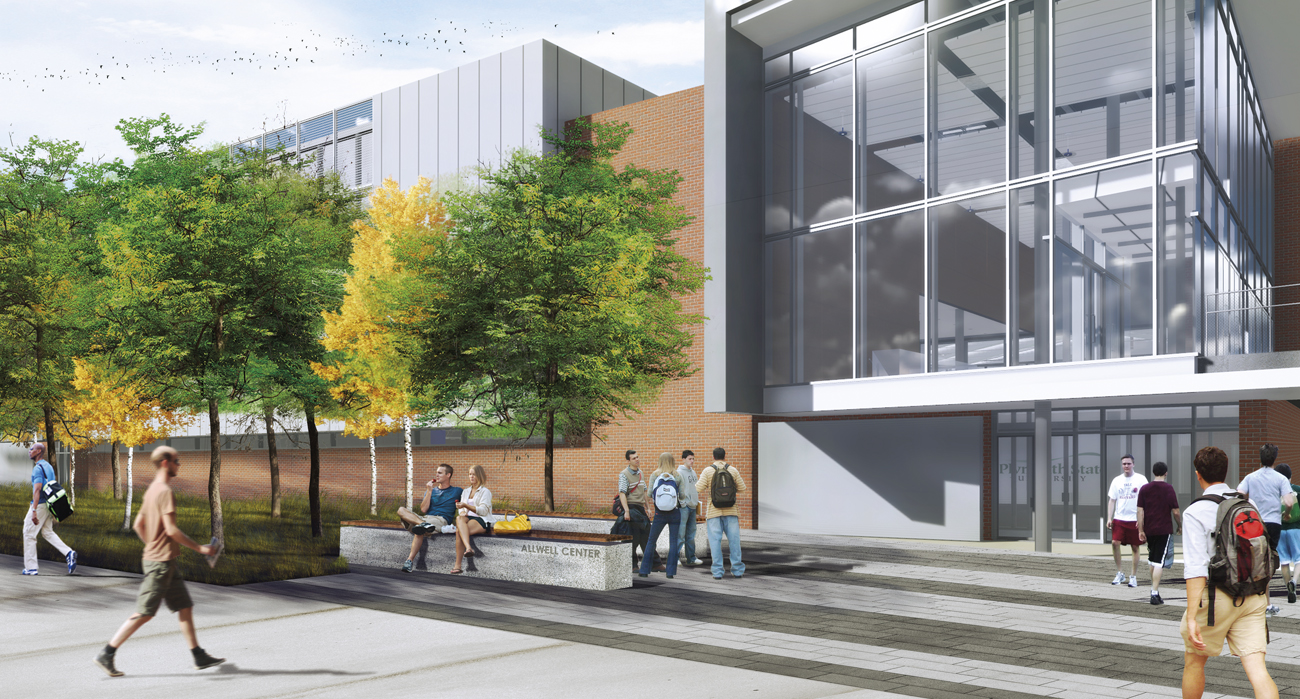 The construction of Plymouth State University’s newest building, the Active Living, Learning, and Wellness Center (ALLWell North), marks an exciting moment in the University’s long history of service to New Hampshire, with special emphasis on the North Country and Lakes Region, highlights its critical roles in contributing to the state’s economic base and preparing an educated workforce.

ALLWell North will be a boon to the state and region. When it opens in fall 2015, the 107,600-square-foot facility will provide new indoor fitness and recreational opportunities for the community, accommodate up to 6,000 people for regional events and performances, and allow the University to host large-scale track and field events for the state and region. Further, ALLWell North will create an estimated $4 million annual economic impact for the region through job creation, visitor spending, and additional procurement by the University.

Building on Success
ALLWell North is the second phase of a multiphase building plan for the east side of campus and will be the greatest transformation in academic and campus life at PSU to date. The first phase, the PSU Ice Arena and Welcome Center, completed in 2010, has enhanced academics, athletics, and recreation for the University and beyond. Exercise and sport physiology students use the ice rink to conduct testing on student-athletes to assess their fitness levels, and athletic training students use the facility as one of their clinical rotation sites. The ice arena has also provided a much-needed venue for exercise and events such as open skating and skating lessons, hockey, broomball, and, most recently curling—all of which are available to campus and community members. Skating on home ice, increased seating for fans, and attracting highly regarded recruits eager to play in a beautiful arena have improved the performance of the PSU’s men’s and women’s ice hockey teams. Since the facility opened in fall 2010, the men’s hockey team has played in three straight collegiate championships.

The PSU Ice Arena and Welcome Center also established a more attractive and welcoming entrance to campus on Holderness Road, an entrance that will continue to be enhanced by ALLWell North and the new green spaces surrounding it that figure prominently into the plan. 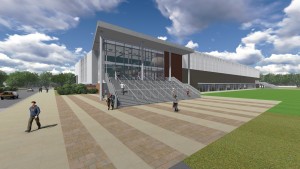 Regional Benefits
The educational, research, and recreational activities that will take place in ALLWell North will have major implications for the health and wellness of our region.

PSU’s Department of Health and Human Performance—the University’s second-largest department— engages graduate and undergraduate students in rigorous coursework and collaborations with faculty who are conducting cutting-edge research, such as fall risk assessment for senior citizens, the impact of concussion in athletes, and the benefits of staying active throughout the life span. In ALLWell North, classroom and hands-on learning will occur under one roof thanks to the building’s large-scale, multi-use space and retractable partitions that create classrooms and research laboratories.

“Successfully preparing future health and wellness professionals requires a synergy between academic and experiential learning,” says Julie Bernier, PSU provost and vice president for academic affairs. “Our students will be better prepared to serve the region because of how ALLWell North integrates academics, athletics, and recreation on one site.”

Better-prepared students lead to high-quality health and wellness professionals who benefit the schools, hospitals, clinics, social service agencies, rehabilitation centers, and health and fitness facilities in which they work throughout New Hampshire and New England.

“ALLWell North will include an athletic training room where athletic training students like me will practice our skills at evaluating, treating, and caring for athletes who compete in and around the building: cross country and indoor and outdoor track and field athletes to begin with, and eventually football and other outdoor sports teams,” says Brendan Curtin ’15.

ALLWell North will also provide a home to the University’s Center for Active Living and Healthy Communities, a center for education, research, and community partnerships that attracts grant support and research dollars to the state. Rebecca Busanich, assistant director of the center, is currently involved in a research project that could shine light on the complexities and benefits of physical activity for those with disabilities as well as support the work of local non-profit organizations like Adaptive Sports Partners of the North Country (ASPNC), which aim to support such experiences through evidence-based practice.

Tourism and recreation are two of New Hampshire’s most important industries, and are major economic drivers for the state. Highly trained adventure education professionals are in demand by local and regional employers. ALLWell North will help prepare students for careers in outdoor leadership, adventure education, state and national park outdoor education, therapeutic adventure, environmental education, and recreation. “There is no institution better situated than PSU, in the midst of our vast natural resources of the Lakes Region and the White Mountains, to train the future leaders in the expanding field of adventure and outdoor programming,” says Jeffrey Rose, commissioner of New Hampshire’s Department of Resources of Economic Development. 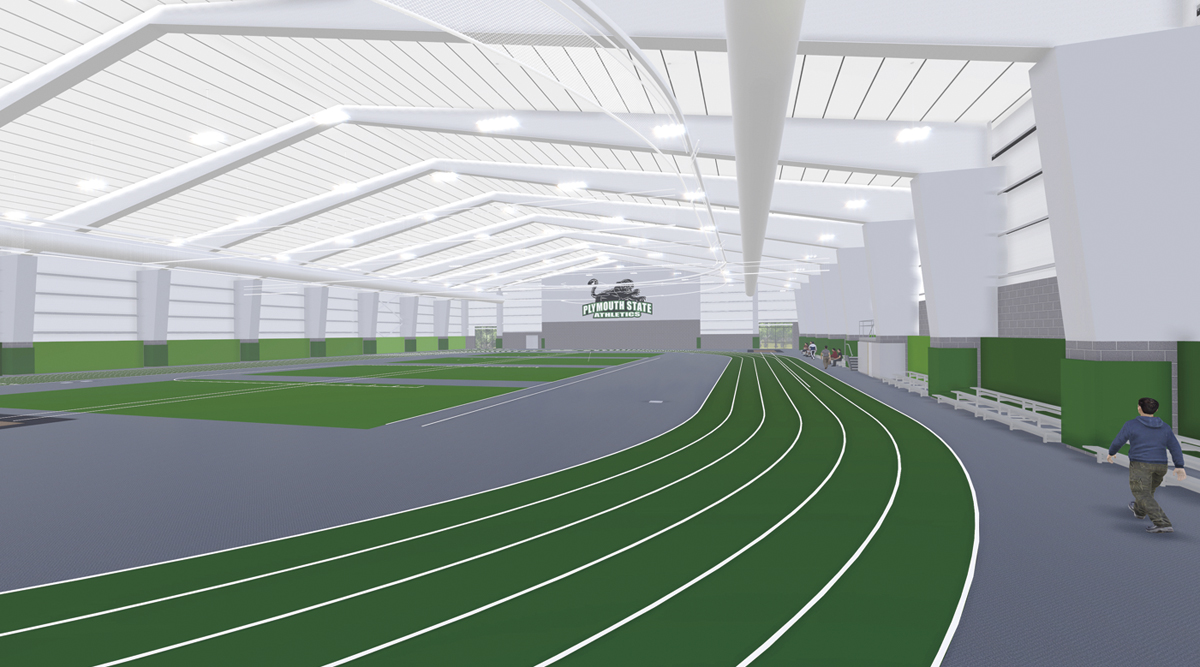 Student Benefits
While the state and region will benefit greatly from the presence of ALLWell North on campus, the state-of-the-art building will establish an attractive, welcoming entrance to the campus; enhance PSU’s faculty and student recruitment efforts; and transform the academic and athletic experience for more than 75 percent of the student body who will use the building as a classroom, as varsity competition and training space, as a place to participate in intramural sports, and other recreational opportunities.

ALLWell North begins the transition out of the school’s current Physical Education Center that opened in 1968 to serve a campus of 1,800 students. Considered one of the finest college-level facilities when built, the PE Center now lags far behind in serving a campus of 7,000 students and 24 men’s and women’s varsity athletic teams.

Larry Haynes ’86, president of the PSU President’s Council and CEO of Grappone Automotive Group in Bow, NH, says ALLWell North will make PSU more competitive, both in admissions and in athletics. “When prospective students see that your facilities are outdated, they’re not going to come here,” he says. “With ALLWell North on campus, just think of the return on investment in terms of student recruitment, athletic competitiveness, and graduate preparation.”

Double the size of the current field house, ALLWell North allows for a wide range of activities to take place simultaneously, maximizing the building’s usefulness. Among ALLWell North’s key features are more locker rooms and restrooms, indoor tennis courts, and a full-size track, which will allow PSU to proudly host regional track and field events and bring back its varsity track and field teams.

Reinstating PSU varsity track and field is welcome news to alumnus George Davis ’63, founding coach of UMass Lowell’s cross country and track and field programs, a member of three track and field halls of fame, and 20-time NCAA Division II Coach of the Year Award recipient. “I remember the [first] track program at PSU—when it was dropped, I was devastated,” he says.

When PSU asked Davis to serve as a consultant on the new 200-meter track, he jumped at the chance to be part of his alma mater’s latest venture. Helping plan and design the track was, he says, “one of the great experiences I’ve had in my professional career … to help this become the great facility that it will be.”

In recognition of Davis’s distinguished career and his love for PSU, Davis’s son Kevin recently honored him with a major gift in support of ALLWell North. The track that Davis worked so hard to help plan and design will be named the George E. Davis ’63 Track.

Stewarding Financial Resources
While the advantages of ALLWell North to both the region and the campus are abundant, the decision to build a new facility on campus was made only after careful resource planning and consideration. In recent years, the University has had to commit $1.75 million annually simply to maintain the outdated PE Center. Continuing that expense is imprudent, and a recent external study concluded that replacing the facility is more cost-effective than continuing to repair or renovate it, while also reducing the University’s maintenance backlog and addressing safety and accessibility concerns.

Guided by the University’s Strategic Plan and 10-year Campus Master Plan, ALLWell North will solidify PSU’s niche as an established leader in the education and training of health and wellness professionals.

Breaking Ground, Gaining Momentum
Thanks to support from generous alumni and friends, the Campaign for ALLWell North is well under way with just over a half-million dollars in gifts and pledges toward an overall goal of raising $1.5 million in private support by June 30, 2015. Plymouth area business owners and community leaders Don ’84, ’98G and Arlene ’83 Stoppe were the first to step forward with a major gift for the project. The Stoppes, who personify active living and healthy lifestyles themselves, generously supported the construction of the ice arena and welcome center and are dedicated to helping their alma mater transform health and wellness throughout the region.

Stoppe believes that ALLWell North will give a tremendous boost to alumni pride, and expects it to draw more alumni and families to campus, whether it’s for a game, an alumni event, or an admissions open house. “This is what we want for our school,” he says. “We want our athletics teams to succeed; we want enrollment to increase; and we want our alma mater to be recognized for its teaching and research. We want to bring our children, our nieces, our nephews—the young people in our lives—back to campus and say, ‘This is where I went to college’ with pride.”~ Barbra Alan

To learn how you can support ALLWell North, contact John Scheinman at 603) 535-2805 or jscheinman@plymouth.edu.

A portrait of an increasingly international university where visiting faculty, exchange programs, and foreign-study trips...
Copyright 2019 Plymouth State University
Back to top