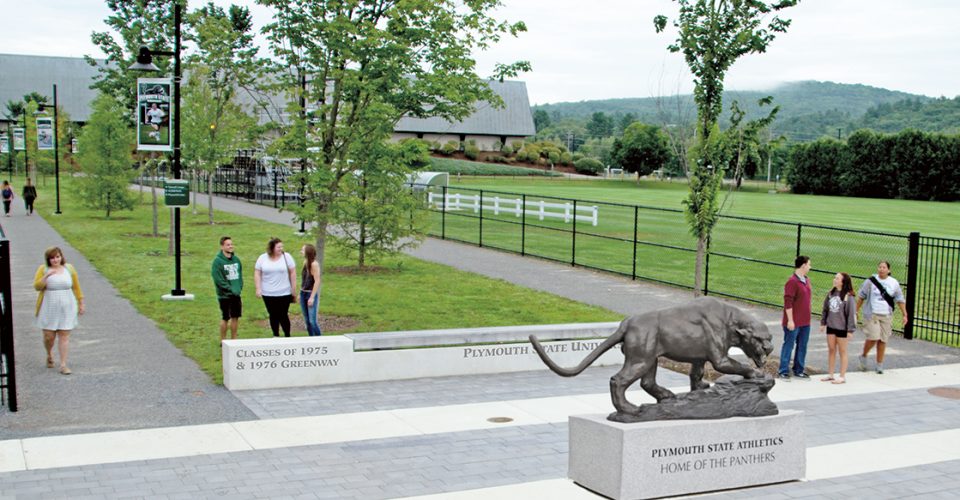 Plymouth State University’s new integrated clusters model offers a host of benefits to current and incoming students seeking real-world opportunities to apply their knowledge while accruing foundational skills. But what of alumni, donors and members of the surrounding community who wish to participate in this groundbreaking initiative; are there ways for you to engage as well? In a word, yes—there are many avenues to participation, as the following initiatives demonstrate.

Reconnecting to the Past, Contributing to the Future: Classes of 1975 and 1976 Greenway

Plymouth State’s Greenway is one of the most heavily trafficked sections of the campus, a beautiful allée that welcomes visitors, current and prospective students to campus and leads to The Center for Active Living, Learning and Wellness (ALLWell North) and PE Center.

Hundreds, if not thousands, pass by the Greenway daily, a fact that convinced alumni from the Classes of 1975 and 1976 that this site was the ideal place to place a permanent marker celebrating their time at Plymouth State and establishing their commitment to the health and well-being of all who pass this way in years to come.

The project also allows class members to contribute to an integrated cluster—in this case that of Health & Human Enrichment—through investment in a capital project that directly benefits the cluster.

The idea grew out of conversations held at the classes’ 39th and 40th class reunions. During that Homecoming Weekend and in the months after, old friendships were rekindled and members of the two classes realized they wanted to do something to leave a legacy for current and future PSU students. “The Greenway naming project gives our classes the opportunity to leave a permanent marker on campus that commemorates and celebrates our experience at PSC/PSU, while also allowing us to reconnect with the campus and underscore the importance of giving back,” says project co-organizer Scott Biederman ’75.

Biederman is spearheading the campaign—whose tagline is “Let’s do this!”—with his wife Patti Ryan Biederman ’76, Dianne Lutz Rappa ’76 and Diane Tillotson Tiffany ’76. The foursome has set a preliminary fundraising goal of $100,000 for the project, which will be used to engrave a stone bench marker with the inscription “Classes of 1975 and 1976 Greenway.” The total gift of $250,000 is the goal for 2020; these funds will be used to support current and future programs at the ALLWell Complex. “This is not so much about giving back to the University as it is building for the future,” observes Rappa.

The ALLWell Complex is an important locus on campus and the ALLWell North building, which opened in November 2015, has further enhanced the area. The 107,600 square-foot building is a point of pride in Plymouth and Holderness, offering new academic, athletic and recreation space to the campus and the community. ALLWell North provides a host of benefits: enabling enhanced offerings for Health and Human Performance majors and minors—the university’s third largest major; creating a beautiful Outdoor Center with programs and equipment available to all students; offering a new fieldhouse that serves as the largest capacity venue north of Manchester; opening new avenues for economic development in Plymouth and Holderness through visitor spending; and significantly improving athletic and recreational opportunities for both campus and community members. “ALLWell North is visible, viable and important for our state and for the North Country,” asserts Rappa.

“I think it’s important for current and prospective students to see that, 40 years out, alumni are still involved with the campus and giving back,” says Tiffany. “It sends a powerful message about our belief in the institution.”

“Competition for students among colleges and universities is very strong these days, and we want to let our classmates know what’s happening at Plymouth State now and what’s coming in the future. The University’s new integrated clusters model not only offers kids the opportunity to get an education, but also allows them to graduate with the ability to get a job, which is very powerful,” Scott Biederman concludes. “We want alums to come back to campus and see how pretty it is, and we want to keep students in the state after they graduate. The ALLWell Complex plays an important role in the life of the campus and community and we’re happy to support it.”

Those wishing to make a gift or bequest (a gift can be pledged over three years) are encouraged to call John Scheinman, director of Development and Major Gifts, at (603) 535-2805.

The title of the Museum of the White Mountains’ (MWM) recent exhibition, Forecasting: Climate Change and Water Impact, suggested a rather technical installation, but those expecting to be met with dry charts and graphs got a surprise: the exhibition was not only informative, but also beautiful. It also provided a stunning illustration of the inherent strength of Plymouth State’s new integrated clusters model—focusing, in this instance, on the cluster of Tourism, Environment & Sustainable Development—by drawing faculty, students, alumni and community members together to address the real-world dilemma of climate change.

Uniting the disciplines of meteorology, technology and visual art, ‘Forecasting’ explored the topic of climate change and its impact on water. Artists and scientists from across the region joined forces to create works coupling contemporary art with scientific data on the oceans of the world, waterways, atmosphere and drought, all with the goal of deepening visitors’ understanding how climate change impacts individuals.

An area of particular focus for the exhibit was the Mount Washington Boundary Layer Exposure Project which Eric Kelsey, PSU research assistant professor and director of research at Mount Washington Observatory, suggested would lend itself to artistic interpretation.

In September of 2016, after preliminary discussions with participating artists Shandra ‘Shani’ McLane ’09G and Kimberly Ritchie, who co-curated the exhibition with MWM Director Cynthia Robinson, Kelsey invited the artists to join him and a group of six students collecting data on the mountain. “We spent the day releasing weather balloons and driving a water vapor stable isotope analyzer up and down the Auto Road in the passenger seat of a pick-up truck,” says Kelsey. “The data we collected revealed a lot about how the boundary layer evolves during the day.”

“It was a fascinating day,” agrees Ritchie. “Shani and I talked to the scientists and students and experienced the research in progress, all of which gave us some great ideas for visually displaying the study findings.” PSU alumna and glass artist McLane relies heavily on science to produce her work and asserts that presenting new ideas in aesthetically pleasing ways can provoke dialogue. She is also interested in environmental issues, so an exhibition designed to present climate science to a larger audience in a fresh way was incredibly appealing, as was the group dynamic that defined the project. “One of my favorite things is collaboration—it transforms my work,” says McLane. “Working on this exhibition was wonderful; we all contributed something and our individual insights came together seamlessly.”

Ritchie, an assistant professor of art at PSU and coordinator of the University’s printmaking program, was similarly enthusiastic. “I’m very interested in the role of art in science as well as the role of science in art,” she says. “Science provides a platform for me to build on and I help scientists by making hard facts and data more visually accessible.”

For atmospheric scientist Eric Kelsey, the project represented an opportunity to express his research findings in a new way. Kelsey’s sketch of his initial experimental findings—a visualization of the way air moves around the mountain—was included in a multimedia piece created by McLane and Ritchie. Although he’s not accustomed to presenting his findings through art, Kelsey learned how art can bring scientific results to a much broader audience, thus increasing the impact of his research. In addition, says Kelsey, communicating science through art is very much in keeping with current scientific trends. “The National Science Foundation is keen on having artists involved in communicating scientific knowledge to the public. Participating in this exhibition was the first time I’d done something like this, but I hope this is just the first phase of a larger science/art collaboration on this project.”

Didn’t make it to the exhibition? Go online and watch the video, The Boundary of Art & Science. See what happens when the arts and science combine: vimeo.com/215554338. Ann Haggart’s recent gift of nearly $1.5 million to Plymouth State University—one of the four largest gifts the institution has ever received—was undeniably generous, but to those who knew her, it was hardly surprising: a commitment to education was part of Haggart’s DNA.

A lifelong educator, Haggart was also a descendant of Colonel Samuel Holmes, who in 1808 gave $500 to create a teacher’s preparatory school, Holmes Plymouth Academy, the

predecessor of Plymouth State University. Haggart picked up the baton for her generation, committing her life to serving disenfranchised children through her company AGH Associates, Inc., which provided training and therapy in public schools and child care centers across the nation. Prior to her death in February of this year, Haggart underscored her faith in the power of education once more.

Haggart requested that her bequest be split to serve two purposes. One portion will provide scholarships to New Hampshire students with documented financial needs, with priority given to those hailing from Coös, Grafton and Carroll counties. “Approximately 40 percent of our students represent the first generation in their family to attend college,” notes Vice President for University Advancement Paula Lee Hobson, “and Ann realized how vital scholarship support often is to this segment of our student body.”

The other 50 percent of Haggart’s gift will be used to create the Holmes-Pattee-Haggart Transformational Leadership Institute, an initiative that will focus on K–12 leaders and their connection with community leaders. “Ann saw the potential in our new integrated clusters model and immediately recognized an opportunity to support experiential learning experiences for K–12 leaders through an open laboratory here at PSU,” explains Hobson.

Haggart knew that K–12 administrators were eager for hands-on experience in continuing education, explains Hobson, and envisioned a program in which these individuals could work side-by-side with leaders from across the state to bolster their skills.

Indeed, Haggart’s concept dovetails beautifully with the aims of PSU’s new clusters: Innovation & Entrepreneurship and Education, Democracy and Social Change.“We’re heartened by Ann’s foresight and belief in the University’s new approach to education,” says Hobson. “Her generous gift represents a huge investment in the integrated clusters model as well as a major boost for student scholarships.” 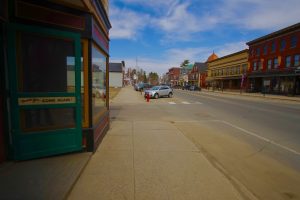 The Lancaster Project, an integrated cluster initiative that uses a multidisciplinary approach, focuses on bringing...
Copyright 2019 Plymouth State University
Back to top