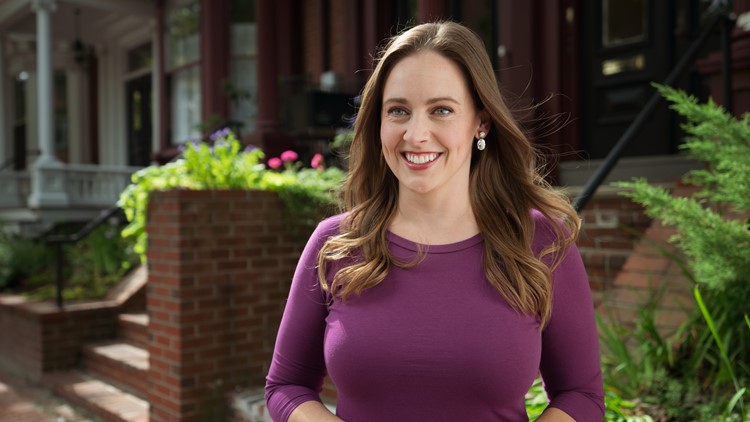 Maine native Jessica Conley ’08 is a meteorologist with News Center Maine, Portland’s NBC affiliate. Her lifelong interest in the subject and support from connections made through PSU’s meteorology program enabled her to persevere and achieve her career goal.

Conley’s persistence can be traced to second or third grade, when she began regularly switching TV channels to review each one’s snowfall maps. She always liked math and science and by the time she was in high school was considering a career in medicine, until an aunt pointed that “the weather,” which Conley kept thinking about all of the time, could also be a career.

PSU’s meteorology program is close-knit, and Conley was among roughly a dozen students. “Meteorology is a very specific major and a very specific interest,” she says. She credits Meteorology Professors Loudes Avilés, Eric Hoffman, and now retired Mathematics Professor William Roberts for helping her overcome difficult courses like differential equations and atmospheric physics.

The field can be tough to break into, but Conley was determined. “I knew that this is what I wanted to do,” she says, and she paid the bills after graduation by working in retail, banking, and an ice cream parlor. “Even when I was working at the ice cream shop I still watched radar,” she says. “I would tell others if it was going to rain in an hour.”

Her technical background was strong, but more was needed. “I wasn’t exciting enough!” she laughs. “When I started college I was a nervous, shy public speaker. I could barely get through my first-year climatology presentation without my voice cracking! You just keep practicing, keep trying, eventually you’re going to get it—that’s how I felt when I was applying to jobs.”

In the days before links to YouTube videos, budding on-air personalities sent demo “highlight reels” to prospective employers. Conley had interned as a PSU senior at WMTW-TV, Portland’s ABC affiliate, and friends at the station gave her helpful feedback, as did NBC Boston Meteorologist Chris Gloninger ’06.

Over time, Conley learned to energize her delivery. She mailed over 200 demos to stations across the country over a period of two and half years before landing her first gig in Mississippi. After a year, she moved back to Portland as a freelancer, filling in for a permanent meteorologist who was on maternity leave, then took a full-time position in Bangor for two years. She subsequently headed south again for a year in Savannah, GA, before returning to Maine—permanently, she believes.

Conley was president of the Class of 2008 and enjoys encouraging today’s Panthers. She returned to campus with Gloninger this spring as guest speakers in a broadcast class and told students about her former fears. “Public speaking doesn’t bother me anymore, and now I can talk in front of anyone,” she says. Including perhaps a second- or third-grader in the television or online audience who may want to become a meteorologist one day. 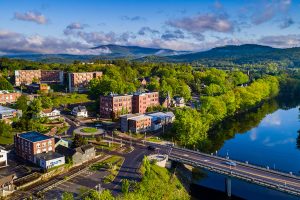