Beyond Granite: The Museum of the White Mountains Takes on STEM

As American students and workers fall behind their counterparts around the world in the science and technology fields, educators and policy makers have stressed the importance of strengthening our attention to STEM—science, technology, engineering, and mathematics. Exhibition curator Sarah Garlick writes about the connections between earth science, adventure, and the process of learning STEM in the Museum of the White Mountains’ latest show.

If you watch children playing outside—at the beach, along the banks of a stream, even on a playground—it doesn’t take long to recognize an almost universal fascination with rocks. Kids pick up stones, notice their shapes, textures, and weight. They hunt for crystals and seek out bare exposures of rock in just about any setting. But for many adults, we’ve lost that fascination as we’ve grown older. Many of us have become conditioned along the way to think about rocks and geology as boring, or perhaps too complicated or difficult, or simply not relevant to our lives.

But if you think about our world today, as we face the impacts of a changing climate, as economies and technologies around the world grapple with limited natural resources, and as our headlines are dominated by natural disasters like earthquakes, tsunamis, hurricanes, and mud slides, one could argue that the science of the Earth is the most critical discipline of our time. 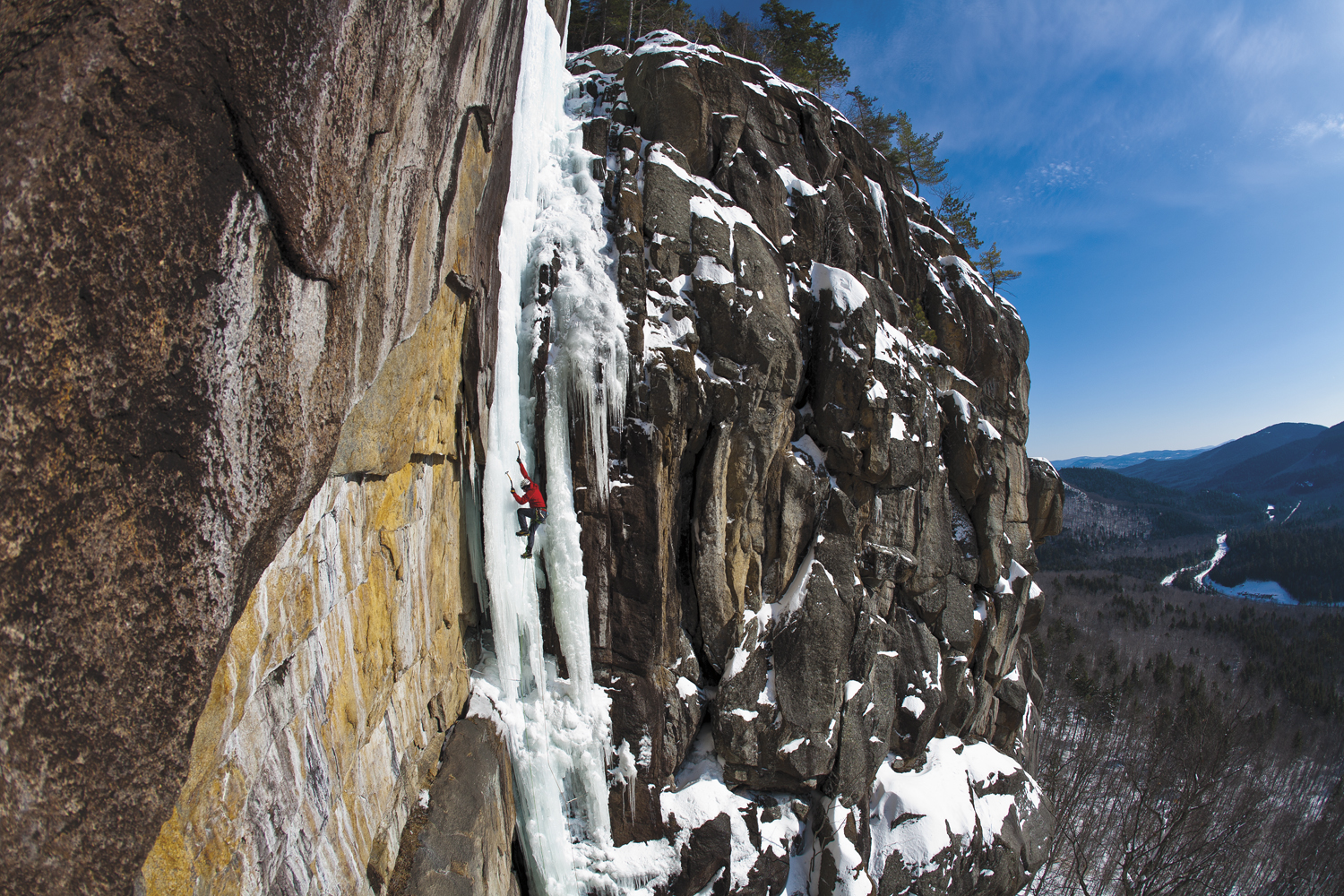 Climber Peter Doucette ascends the ice climb Way in the Wilderness on the cliffs high above the Kancamagus Highway. Anne Skidmore photo.

Beyond Granite: the Geology of Adventure

Last March, the Museum of the White Mountains—Plymouth State University’s transdisciplinary center for White Mountains history, culture, and environmental legacy—opened its doors to a new exhibition that dives headfirst into the world of Earth science. This exhibition, Beyond Granite: the Geology of Adventure, explores the connections between outdoor recreation in the mountains and the science of the landscape itself. The exhibition focuses on the experiences of hikers, climbers, skiers, and snowboarders in the White Mountains, and ties these stories to the underlying history of the bedrock and mountainous topography. As the guest curator for the show, my goal was to bring the science of geology close to home—to tap into that original delight in rocks and nature that many of us first experienced as kids picking up pebbles in our driveways and yards and connect it to the world-class recreation opportunities that millions of people enjoy each year in the mountains of New Hampshire.

At the heart of the exhibition are large-format panoramas of three iconic locations in the White Mountains: Cannon Cliff, the Franconia Ridge, and Mt. Washington. These images are called GigaPans—gigapixel panoramas—and they are created using a robotic mount connected to a camera, allowing the photographer to systematically shoot hundreds of images for a single scene that are later stitched together into one photograph using a computer. The resulting photos contain billions of pixels, which means they can be printed to enormous sizes while maintaining high resolution, and in the digital format, users have the ability to deeply zoom into a scene. 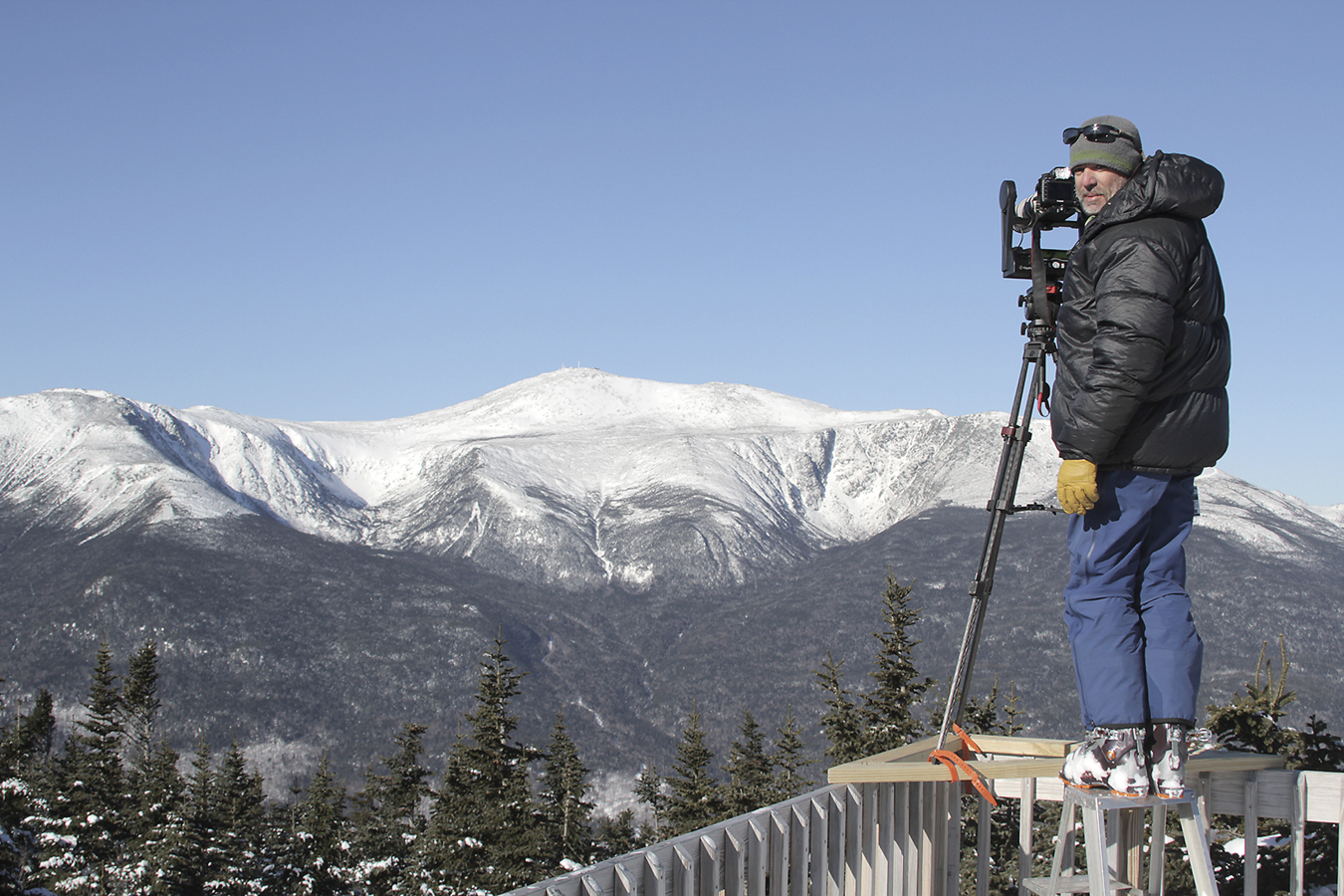 Adventure cinematographer and photographer Jim Surette capturing a Gigapan image made up of over 500 separate images taken over hours.

GigaPan Technology: “a new way to look at the mountains”

Adventure cinematographer and photographer Jim Surette of North Conway shot the three GigaPans featured in Beyond Granite. “It was an adventure just to capture the GigaPans,” Surette says. “Each GigaPan is a composite of over 500 individual images. They take hours to capture and process and conditions have to be perfect. But the result is worth it. The level of detail you can zoom into is incredible. The technology reveals a new way to look at the mountains.”

While the technology for creating GigaPans has been around since 2008, the use of GigaPans as a tool to support science learning is an area of emerging education research. To bring GigaPans into the Museum of the White Mountains, I worked with a team of researchers from the University of Pittsburgh’s Center for Learning in Out of School Environments (UP-CLOSE) and Carnegie Mellon University’s Community Robotics Education and Technology Empowerment Lab (CREATE Lab). This group, which includes researchers who helped develop the technology for NASA’s Mars Rovers, has been experimenting with technological platforms for enhancing science learning in museums and other settings via these deep-zoomable images.

Through our collaboration, we adapted one of the team’s experimental program designs to fit content from the White Mountains. We built a computer kiosk with a touch screen that allows museum visitors to use their fingertips to explore Cannon Cliff, the Franconia Ridge, and the east sides of Mt. Washington, Mt. Madison, and Mt. Adams in an entirely new manner than ever before. We embedded stories, diagrams, and photographs from important locations within each image to support discovery and learning. For example, on the Cannon Cliff GigaPan, you can zoom into the talus field and learn about talus formation or zoom into the old turnbuckles that once secured the Old Man of the Mountain and read about its geological origins and collapse. You can then pan over to the Black Dike and read about its hair-raising solo first ascent by ice climber John Bouchard in 1971.

To experience the full impact of the GigaPans, we printed them for physical display on the museum walls in addition to their digital display on the touch-screen kiosk. Each panorama spans three feet in height and 12–14 feet in length. We used a special large-format printer that allowed us to install these photographs directly onto the gallery walls—there are no frames or panes of glass to separate viewers from the scene. You can get up close and trace details like climbing routes and trails and geologic features like fracture patterns, landslide scars, and the shapes of the ravines.

As a science educator, I believe that the GigaPans in Beyond Granite have provided an exciting opportunity to bring new technologies and research-based exhibit design to the Museum of the White Mountains. As a lover of science and nature and as an avid climber, hiker, and skier, I also find the GigaPans to be cool. Feedback we’ve received has shown that many museum visitors feel the same way.

As it turns out, these two perspectives, one of education and one of enjoyment, aren’t as unrelated as they might seem. The National Research Council of the National Academy of Sciences released a consensus report in 2010 about how people learn science in informal, out-of-school settings. Contrary to old notions, the process of learning science is not as simple as filling up an empty brain with facts and concepts. Instead, education researchers now recognize learning as a social and context-driven process, and that learning science encompasses much more than building conceptual knowledge. The process of science learning, something that occurs throughout and across many settings of one’s life, includes several distinct aspects, or strands, as learning researchers call them. These strands include sparking interest and excitement, understanding content and knowledge, engaging in scientific reasoning, reflecting on science as a way of knowing, using the tools and language of science, and identifying with the scientific enterprise—thinking of oneself as someone who learns about science [1].

As the Beyond Granite exhibition evolved from an idea to an outline to a complete show, I worked with the museum staff and an advisory board of geologists to weave these different strands into the exhibit design. For example, one of the foundational aspects of science learning is experiencing excitement, interest, and motivation to learn about phenomena in the natural and physical world [1]. This is at the core of Beyond Granite—the strength of the ties between science and the activities and places people love.

Also, the use of the GigaPans provides an opportunity for the exhibition to support aspects of scientific reasoning, another important strand of how we learn science. As visitors interact with the GigaPans, both in digital form and in their large-format prints, they engage in acts of exploration, observation, questioning, and making sense of the natural and physical world. These are key science reasoning skills. 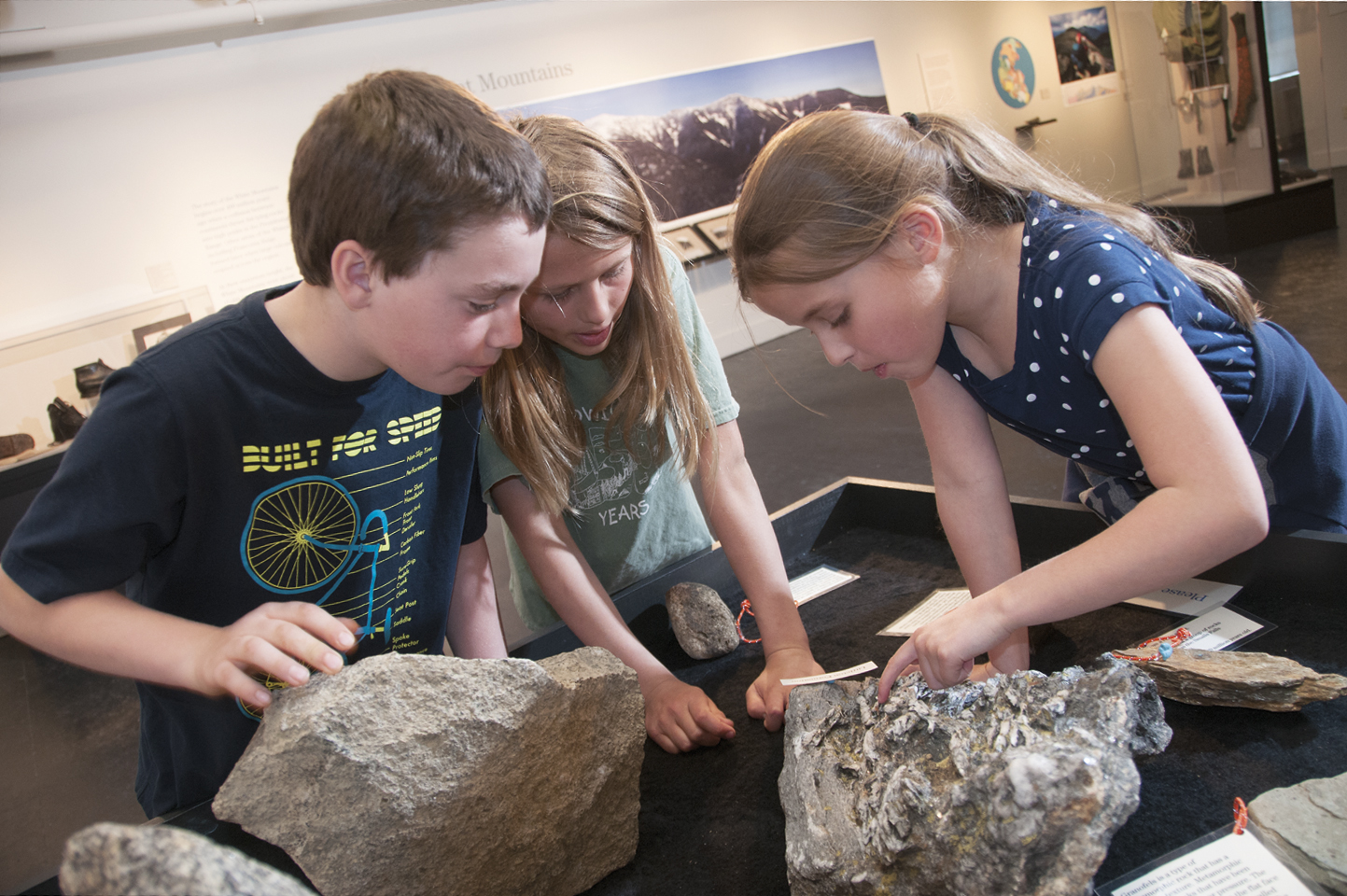 Beyond PSU: Educational Impact for All

Under the leadership of museum director Catherine Amidon, the educational impacts of Beyond Granite—and all exhibitions at the Museum of the White Mountains—are designed to reach far beyond the walls of 34 Highland Street. As with all of the museum’s collections and shows, images, videos, materials, and texts are made available for free to anyone and everyone via the museum’s website. Also, the museum has released standards-based lessons based on the exhibit that are available for free to New Hampshire teachers and are divided into elementary, middle, and high school levels. These lessons, designed by science education consultant Jackie Wilson, provide easy-to-adapt frameworks for teachers to bring the geology of the White Mountains and the thrill of outdoor recreation into their classrooms.

This last point—the thrill of experiencing the mountains, whether out on a casual walk or in the vertical plane of a rock climb—is what Beyond Granite is all about. This show, like the underlying mission of the institution that houses it, is a celebration of this magnificent region many of us have the good fortune to call home. I hope that at least some museum visitors come away feeling like I do, that science doesn’t have to be a separate, technical, and intimidating discipline, that it is woven into our everyday experiences and is an opportunity to deepen and enrich our lives. ~Sarah Garlick

Beyond Granite: the Geology of Adventure, curated by Sarah Garlick, is on display at the Museum of the White Mountains until March 8, 2015. Garlick is an award-winning author of Flakes, Jugs, and Splitters: A Rock Climber’s Guide to Geology, and National Geographic’s Pocket Guide to Rocks and Minerals. She is the director of science, policy, and outreach for the Hubbard Brook Research Foundation.