The Best Job Perk Ever 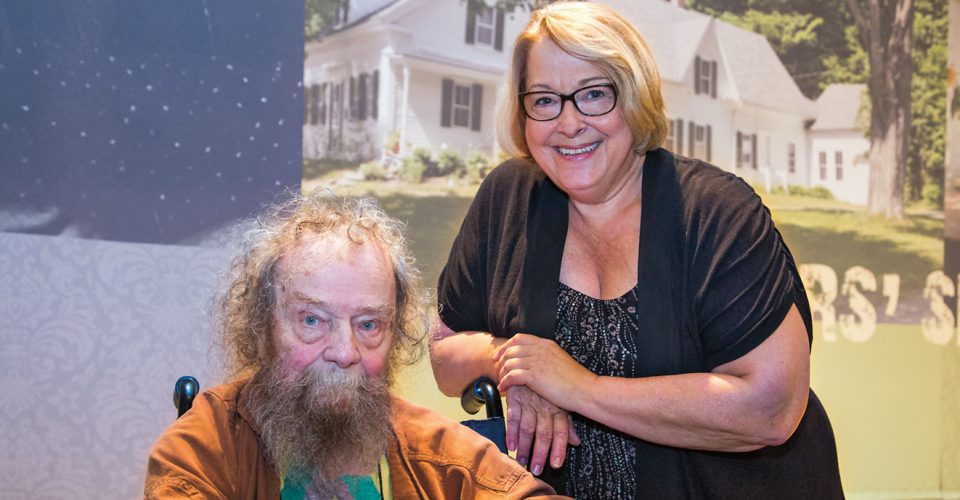 An Interview with Donald Hall

When I tell people that I am director of PSU’s Silver Center for the Arts, they often say “That sounds like fun!” Not only do I confirm their suspicions, I often tell them about the fascinating people I work with and get to know. At the top of that list is Donald Hall.

A New Hampshire poet and author, Hall has had honors bestowed upon him by two US presidents: In 2006, George W. Bush appointed Hall the 14th US Poet Laureate, and in 2010, President Barack Obama awarded him a National Medal of the Arts. It may not be as prestigious, but I have an honor for him as well: “Best Job Perk Ever.”

Within a few weeks of becoming director of the Silver Center in 1996, I invited Don to read his poetry. Frankly, I wasn’t that familiar with his work, but there had been a lot of local and national press about the death of his wife, the poet Jane Kenyon, just the year before. I started to read both Jane and Don’s poetry and quickly became a fan of both. While I loved Don’s poetry, his essays on living at Eagle Pond Farm were like a guide to living in New Hampshire for me, a native Southerner, so I read everything by him that I could get my hands on.

Around the time of his first reading at Silver, he was beginning to write the collection called Without, a book of poems dedicated to Jane Kenyon that earned him the L. L. Winship/PEN New England Award in 1999. His reading at Silver was one of his first after her death and was quite somber, as I recall. And it was absolutely brilliant. Don had always been known as a powerful performer of his own poetry (which is not always the case with poets) but unbeknownst to me, he was considered one of the best. So on a sweltering summer night in the middle of August, with almost no advertising, the Smith Recital Hall was packed. After a few more readings over the next couple of years, we formalized our relationship and the Eagle Pond Authors’ Series was born. Eagle Pond Farm in Wilmot, New Hampshire, is the ancestral home where Don’s grandmother and mother were born, where he spent summers as a child, and where he and Jane Kenyon moved in 1975. Eagle Pond Farm in Wilmot, NH, Hall’s ancestral home where he spent summers as a child

For the past 18 years, the Eagle Pond Authors’ Series has celebrated great writing by some of the nation’s outstanding authors. The series has featured three US poets laureate: Donald Hall, Charles Simic, and Maxine Kumin; six Pulitzer Prize winners: Sharon Olds, Charles Simic, Galway Kinnell, Franz Wright, Jorie Graham, and Richard Ford; and five poets who have won the National Book Award: Robert Bly, Galway Kinnell, Ruth Stone, Mark Doty, and Jean Valentine. Many are lifelong friends of Don’s, some are acquaintances from the poetry circuit over the years, and some are relatively new poets who can be a bit starstruck. I love watching their faces as Don introduces them to the audience and talks about their work. His introduction is likely one of the highlights of their professional lives.

Don was born in 1928 in New Haven, Connecticut, and started writing poetry at a very young age. When he was just 16, he was accepted to the prestigious Bread Loaf Writers Conference in Vermont where he met celebrated poet and former Plymouth Normal School faculty member Robert Frost.

“I remember meeting him [Frost] several times on the softball field or after his reading­—but there was one long visit. We sat on the balcony outside the main inn, sitting down for a moment, when two women approached us and we talked. It was a mother and her daughter… . We probably talked for two hours, And now a crazy coincidence: the mother was Dorothy Kunhardt, who wrote Pat the Bunny. She was Linda Kunhardt’s grandmother! Linda was not even born yet.” [Editor’s note: Linda Kunhardt is Hall’s companion and a poet herself].

Don is a graduate of Phillips Exeter Academy, Harvard, and Oxford University, where he graduated in 1953 and became the first poetry editor of The Paris Review. While there, he interviewed many famous poets including T. S. Eliot and Ezra Pound. Just three years later, at the young age of 28, he was already well known enough to be appointed to a national committee by President Eisenhower.

“President Eisenhower started a Person-to-Person Program, supposedly to connect Russians of any particular business to their American equivalent. When the bunch came together, I quickly figured out that I was ‘The Young Poet.’ At the end of the evening meeting, having come up with some silly proposals, the chairman of the committee decided that we would meet the next day … and he suggested that the committee to make the final suggestions should be William Faulkner, John Steinbeck, and Donald Hall. Yes, I was inhibited, but certainly, I was flattered as well.”

For his poetry, Don received the Marshall/Nation Award in 1987 for his book The Happy Man, both the National Book Critics Circle Award and the Los Angeles Times Book Prize in 1989 for The One Day, the Robert Frost Medal in 1990, and Ruth Lilly Poetry Prize for Lifetime Achievement in 1994.

Don says that the ability to write poetry has abandoned him in recent years, so he focuses on prose these days. Last year he published Essays After Eighty, which climbed to number 18 on the New York Times Best Sellers list and met with glowing reviews. He just put the finishing touches on his latest collection, The Selected Poems of Donald Hall, to be published in December.

“It was scary to look forward to choosing the small Selected Poems. It is probably one-fifth of the poems included in White Apples and the Taste of Stone (a large, definitive collection published in 2006). The old volume went out of print, and in the meantime, I had become ashamed of including so much. I picked out my favorites—some are my favorites because other people have liked them so much—and it was easier than I thought it would be. I have had no second thoughts.”

It’s always interesting, I think, to hear an author share who he or she enjoys reading, and what projects he or she has in the works. Don Hall doesn’t disappoint.

“I always read Thomas Hardy. I do not keep up well with what is newly published. I like [poets] Chris Wiman, Henri Cole, and Spencer Reece. I’m working on more prose, this time examples of the ‘flash-essay’—short pieces. I love writing prose, and continue to hope that it is good enough.”

In 2008, upon the occasion of his 80th birthday, we had a small party for Don after his reading of a newly released book, Unpacking the Boxes: A Memoir of a Life in Poetry. At the end of the evening while he was still signing books, I looked through the items he received that night: a framed proclamation from the governor making September 20, 2008 “Donald Hall Day” in New Hampshire, a quart of Kentucky bourbon, a couple of books of poetry, an apple pie, and a small, brightly colored gift bag that contained the ashes of a man Don had never met. The man’s wife was a big fan of Don’s and she brought them as a present. Those are the birthday presents of one fascinating man.

The Eagle Pond Authors’ Series is a tribute to Donald Hall, who is the heart and soul of Eagle Pond, and who has been instrumental in bringing nationally and internationally revered poets to campus. The readings are free and open to the public. Praise for Hall’s latest collection, The Selected Poems of Donald Hall, to be published in December:

“However wrenching [Hall’s poems] may be from line to line, they tell a story that is essentially reassuring: art and love are compatible, genius is companionable, and people stand by one another in the end.”—New York Times Book Review

“The Selected Poems of Donald Hall is the definitive collection, showcasing poems rich with humor and eros and a kind of simplicity that succeeds in engaging the reader in the first few lines.”—Billy Collins

■ Diane Jeffrey ’97, Director of the Silver Center for the Arts

Creating the Future Together