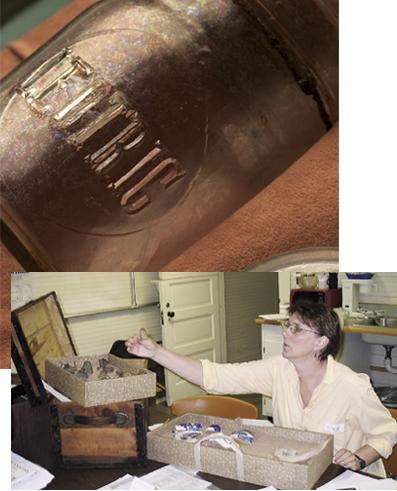 Trunks have been used throughout history for storing and transporting whatever needed to be stored and transported. But this trunk is actually storing history itself. Above: Detail of mason jars, photo by Thomas Ames Jr.; below, Ginny Fisher at work on the trunk exhibit.

Our story begins in the late 19th century, when Thomas and Ruth Priscilla Colbath moved into the small gray Cape-style homestead in Passaconaway, N.H., on what is now the scenic Kancamagus Highway. The house was built by Thomas Russell and his son, Amzi, in the early 1800s. Amzi’s daughter, Ruth, received the house after her marriage to Thomas Colbath. One fall day in 1891, Thomas Colbath left home, saying he’d return in a “little while.” He didn’t come back. They say that every night until her death in 1930, Ruth placed a light in the window to guide Thomas home.

It’s hard to say what really happened. Some believe he was alive and well and living in Ports-mouth the whole time. Some believe there were mother-in-law problems. But the only thing that’s certain is that Thomas Colbath did return to the house in 1933. When he was told that Ruth had died, and that her nieces and nephews had in-herited the property, he left again, never to return.

The house is now run by the Saco Ranger District and the White Mountains Interpretive Association. Visitors to the Russell-Colbath House are greeted by guides in period costume with tales of the house’s history and occupants.

Move forward in time to 1996: Karl Roenke, heritage resources specialist for the White Mountain National Forest (WMNF), explains that water was leaking into the house’s basement and they needed to implement a drainage plan. But before they could do that, they had to have archeologists excavate the site. A partnership between Plymouth State, WMNF and the New Hampshire Department of Education, and funded by the White Mountain Interpretive Association, brought students from Kennett High School, Girl Scouts Swift Water Council, undergraduate and graduate students and faculty from (then) PSC, and other volunteers together to do the digging and interpret their findings.

Associate Professor of Anthropology Kate Donahue provides some background: “The original partnership between the Forest Service and Plymouth State occurred when the Forest Service gave Plymouth funding to survey (find, actually) the route of the Little River Logging Railroad, which ran out of the Twin Mountain/Zealand area. That project took place in the early 1990s. From that time, students have worked with Karl Roenke on a number of projects, including investigating the history of the Kancamagus Highway, internships, archaeology and the Russell-Colbath project.”

Over the years of the excavation, they found—among other things—china and pottery fragments, brass parts from kerosene lamps, bottles, canning jars, knives and forks, a gun flint, a safety pin, clay pipes and stems, glass bottle pieces, a fork with a bone handle, a Goodyear rubber button dated from the 1860s, lots and lots of nails—all of the little details that together tell the story of life on the homestead for 100 years—many, certainly, used by Ruth Russell Colbath, herself.

These items have been cleaned, stored and cataloged in the archeology laboratory, here on the PSU campus. Many hands have labored to care for and interpret these objects, including Benjamin Gerber ’96, Nicole Morin ’97, Desire Ferdinand ’02, heritage studies graduate student Betty Hall and others, who addressed topics such as the economic history of the area, the lives of 19th century farm women and the history of kerosene lighting.

The question was raised of how to share all this knowledge. “A lot of times in archeology, people ask ‘where are the artifacts’ and they’re in a drawer in a lab somewhere,” says Roenke. “In this case, they’re coming back to the public.”

Virginia Fisher knows all about bringing disparate elements together to create a unified, even beautiful, whole. Her life is like that. Fisher is Plymouth State University’s archivist, and house manager for the Silver Cultural Arts Center, where she has also designed exhibitions and costumes. She has taught courses in cooking, costuming and theatre make-up, and serves as the workshop coordinator for the heritage studies master’s degree program. She is also a graduate student working on her own master’s degree in heritage studies.

Fisher sat down with Donahue and Alexis Jackson, public affairs specialist for WMNF, to talk about ways to display the artifacts being found. Fisher liked the idea of a trunk as a learning tool, noting how the layers of a trunk mirror the layers of an excavation. Jackson found the perfect trunk at an antique store in Tilton, N.H. The trunk dates from between 1875 and 1899 (“When the Russell-Colbath House was in its heyday,” says Fisher).

“Although my main interest lies in textiles and textile preservation, much of my work at Silver and in the archives involves exhibits and displays,” Fisher explains. “That, combined with my work in heritage studies, made working on the trunk a natural extension of what I love and am already doing.”

Fisher has been careful to use archival quality materials. The trunk is fitted with trays made of acid-free foam core board and covered with a cotton print fabric in a style that was popular in the late 19th century. The trays are padded with Ethafoam, a material used extensively in museums; it can be carved to accommodate the contours of artifacts and provides a cushion for delicate items. Each artifact is anchored with stainless steel pins and monofilament (fishing line).

Each item is identified by a card detailing its history and references for further research. To protect them, the cards are encapsulated in Mylar.

“Because the trunk itself is very old and is made of an undetermined wood, each tray has a cover of plexiglass to minimize off-gassing from the untreated box,” Fisher describes.

The trunk has been under way for over two years: the culmination of much labor and much research. Upon completion, the trunk will be exhibited at the Russell-Colbath House, and has the advantage of being portable, which will make it ideal for classroom visits or traveling exhibitions.

Future visitors will be able to learn about life in the late 1880s, not just in general, but as it was lived by a specific family. “The excavated artifacts show that the house contained many more creature comforts than might be expected, given that the house today is surrounded by woods and not much else. The pottery, for example, indicates that Ruth Colbath had some ‘nice’ things and wasn’t just ‘making do’ on the edge of civilization,” says Fisher.

Fisher also hopes to use the trunk as an example for future heritage studies seminars and workshops. “Small trunks can be great tools in the classroom. Students can create boxes of family histories using small everyday objects they’ve found around the house. The project opens all sorts of doors to exploring family or local oral history, visits to town historical societies and familiarity with learning from primary sources.”

As more artifacts are identified, more trays can be added, making it an open-ended exhibition. “That’s the way it is with archeology,” quips Fisher. “You’re never done.”

Chair-Man of the Beach 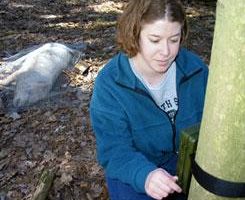 by Sabrina Blanco ’04 Health, Physical Education and Recreation “It was one of the most incredible experiences of my life,”...
Copyright 2013 Jupiter Premium Magazine Theme
Back to top