Chair-Man of the Beach Ten years after graduation, Justin Labdon ’94 has found his place in the red oak arms of a canvas beach chair. It’s a high-quality beach chair that he designed and built himself out of the finely-finished woods, heavy duty canvas and metal fittings that speak to him of the sea.

A self-described “beach bum and lifelong sailor,” Labdon was raised on Cape Cod, so the beach has always been an important part of his life: exploring tidal estuaries, searching for shells and sea glass, night fishing for stripers, surfing or just kicking back to enjoy the beauty of it all. The Labdons were a family of sailors. “When I was growing up on the Cape, my parents had a sailboat and we’d sail to Nantucket on the weekends.” When he was 13, they even spent a year sailing to Venezuela and back—Labdon passed the seventh grade on that trip.

Labdon came to Plymouth State in part to find something Cape Cod doesn’t offer: mountains. While here, he taught skiing at Loon Mountain and played rugby. He was a student member of the American Marketing Association, and graduated with a Bachelor of Science degree in marketing. Business Professor Warren Mason remembers the creativity of Labdon’s new product presentation.

After graduating from Plymouth State, Labdon traveled the country, living in Vail, Colo., Ft. Lauderdale, Fla., and on Cape Cod, while working as a bartender or in various entry-level marketing positions. Labdon got his professional start when he was hired by Jim Balestraci ’89 to work for Network Plus in Quincy, Mass., selling telecommunications services. Labdon was pleased to discover a number of other Plymouth State graduates there as well.

Labdon later moved on to MCSi, Inc., one of the nation’s largest audio-visual systems integrators. As a senior account executive, he founded the Massachusetts office, where he sold design and engineering services, as well as display, audio, control and video conferencing equipment and installation. Sales slowed after the events of September 11 and Labdon was laid off from MCSi in the spring of 2002.

At the time, he and his then-fianceé, Jill St. James, had a condominium overlooking the harbor in the North End of Boston. As they sat on their roof deck gazing at the water, he noticed how rusty their metal chairs had become and thought that somebody should make better quality chairs. Then his marketing background kicked in and it occurred to him that the words “Cape Cod” would be quite a selling point embroidered tastefully on the back of a canvas and wood beach chair.

Several weeks of intensive research followed, culminating in a 50-page business plan—for Jill. “When you tell your wife you want to move to the Cape to start a beach chair company, you have to be pretty prepared,” Labdon jokes. He decided his target market would be people who live or vacation on the Cape, businesses such as resorts and specialty stores, and private organizations such as beach and yacht clubs.

Jill must have liked the plan, because shortly afterwards they sold the condo, got married and moved back to Cape Cod.

The first chair design, the Beachcomber, reflects Labdon’s decisions about style and quality. The combination of well-oiled wood and colorful canvas reflect Labdon’s love of sailing and sailboats. Unhappy with the tendency of metal beach chairs to rust, bend or break, he decided to go with red oak for the chair frames. “Our goal is to make durable, distinctive and great-looking beach chairs, and wood seemed the best material,” he says. The wood is treated with water repellent marine teak oil, which provides protection against ultraviolet rays. Some limited edition models have been made with African mahogany or teak.

He also thought carefully about the fabric, choosing an all-weather synthetic canvas called Sunbrella. He explains that it is soft, comfortable, cleans easily and resists fading, stretching, rot, chlorine and mildew, features not found in cotton duck canvas. Even the metal fittings have to meet Labdon’s high standards: he uses marine grade stainless steel that won’t rust.

Labdon then added drink holders, a pouch on the back for reading material or towels, a padded neck rest and three recline positions. Several more chair styles have since been added to the line, including a child-sized version.

Labdon worked with a Cape Cod graphic design company, Vervaine, in Chatham, to produce a “simple and classy” logo. His first thought was to have a logo featuring a beach chair but he then decided it would look odd to have a picture of a beach chair on a beach chair. The current logo has an aerial view of the Cape as the key visual element.

He began working on his Web site (www.capecodbeachchair.com) almost as soon as his business plan was completed. “I knew it would likely take some time to produce, and I wanted it to be perfect when I officially launched my company,” Labdon says. He wrote the copy himself and worked with Vervaine again to develop the look. Another Chatham company, Click Cape Cod, developed the code for the site, which includes e-commerce applications that even allow customers to design their own special-order chairs.

“My biggest pride and joy on the site is my interactive beach guide,” Labdon says. “I had a map created that I can overlay beaches onto, so that people can see the physical location of a particular beach on the Cape, click on it, and see pictures and a thorough description of its attributes. It is very unique and much better than any other beach guide I have ever seen. I figured that it would draw visitors to the site, whether they purchased chairs or not, and encourage repeat and word-of-mouth visitors. The beach guide added a couple of thousand dollars to the programming costs, but I feel it was worth the investment.”

The site has become the company’s primary point of sale, drawing customers from New England, New Jersey and New York, as well as more distant locations like California, Florida, Illinois and Wisconsin.

Labdon refers to 2003 as the “launch phase”—getting set up and beginning to market the brand: his company has appeared on “Chronicle” on WCVB-TV (Boston, Mass.), in the Cape Cod Times, in Inside Cape Cod and on the cover of Cape Cod 2nd Home Journal. Sponsoring the Figawi sailboat race over Memorial Day weekend helped bring the company to the attention of boat clubs in the area. And he’s getting results: the company sold $50,000 worth of beach chairs last year. This year Labdon hopes to quadruple that number. He looks forward to being able to move away from the hands-on manufacturing of the chairs and focus just on marketing. Long-term plans call for developing and marketing new chair models, and opening a retail store.

Even with a young company to get off the ground, life for the Labdons is not all work. The couple lives in East Sandwich and likes to take advantage of the Cape’s beaches, like Sandy Neck in Sandwich or Cahoon Hollow in Wellfleet, play with their dog, Brewster, or visit with friends and family. They rent a house in Sugarbush, Vt., every winter to ski, snowboard and snowshoe. And, of course, there are the home improvement projects Labdon claims are inspired by his wife’s love of the television show, “Trading Spaces.”

The company is still quite small. Labdon calls himself “president and chair-man.” He has contracted with various manufacturers—all based in Massachusetts—to supply the parts. Labdon assembles the chairs himself, including staining and oiling the wood and branding them with the logo. When we spoke, he was expecting a shipment f 1,000 chair parts the next day.

During the summer, Labdon hires some part-time workers to help with assembly. In addition to her own job with Independence Technologies, Jill St. James Labdon serves as the company’s treasurer. “She’s way more organized than I am,” her husband says, adding, “Most women wouldn’t go through all this with me, but she’s a trooper.”

“I’m not surprised Justin became an entrepreneur,” Mason says. “It certainly appears some of the promotional tools we taught him have served him well.” Looking back on his college years, Labdon says, “I kind of wish I had started a business right after I graduated,” adding that at the time he didn’t always see the point of some of his classes. He does now.

It seems Justin Labdon has found a way to pursue a rewarding career while taking the advice he offers his customers in his “Letter from the Founder” on the Cape Cod Beach Chair Company Web site, wishing them “a life of sun on your face, sand between your toes and salt air on your lips.” 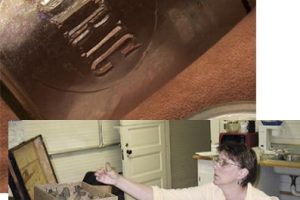 Trunks have been used throughout history for storing and transporting whatever needed to be stored and transported. But this...
Copyright 2019 Plymouth State University
Back to top