Kendal Lariviere ’17 has been playing field hockey since she was 12 years old. She loves the game so much that she’s kept every stick she has ever played with. Her oldest, the one she’s had since her senior year of high school, is the only one she’s ever given a name: Lolita.

Lariviere is now a senior (an English major with a concentration in writing) and reflects on all that PSU field hockey has given to her.

Did you know that you wanted to play field hockey when you came to PSU?

No. This is my 10th season playing field hockey, and I played throughout high school, but I didn’t plan on playing in college. But that all changed when I came to Accepted Students Day at PSU and met with Coach [Bonnie] Lord. The way she talked about the Plymouth State Field Hockey program really spoke to me. She talked about how, besides being a very successful team, they were a family, too. That was what I wanted and needed in a team, even more than winning games.

What do you enjoy about being a student-athlete?

It immediately gets you involved on campus. You’re part of a team. It can be hard leaving home, being on your own for the first time, and entering a school where you might not know anybody. Being a student-athlete makes that process easier. You immediately step on the field or go into the locker room on the first day of meetings, and you know people and have a support group to turn to. I love just being able to be with my team—my family—every day.

Right before you go onto the field, what does Coach say to motivate you? Clockwise from right: Lariviere; 3-year-old Ari Beaulieu of Whitefield, NH; Lariviere’s teammate Alicia Bates; and Coach Bonnie Lord. The field hockey team “adopted” Ari, who has been battling cancer, as an honorary team member last year. Lariviere and Bates were honored with PSU Field Hockey’s Gold Award for their extraordinary support of Ari, who was recently diagnosed as cancer-free.

Before we go on the field, before every game, Coach says the same thing: “Play hard, play fair, play to win, but most of all, play together.” Those words have come to mean so much for me. We all need each other on the field, and we play our best when we’re working as a unit. There’s plenty of talent on the team, but when we’re all playing as talented individuals, it never comes together. It’s always about togetherness and it’s always about us.

What are some of the challenges the team has faced?

The biggest challenge we’ve probably faced in the last couple of years is not being able to practice or play home games on campus.

For my first two years of field hockey, I was fortunate to be able to practice and play on Arold Field, here on campus. The downside was that it was grass. For the past two years, we’ve had to practice and play off campus, but that’s given us access to turf fields. Field hockey is a completely different game on turf than it is on grass. We’re a better team on turf, but we do miss being on campus because we’d get some great crowds.

My hope for the team going forward is that they get the best of both worlds: a turf field right here on campus with great crowds to cheer them on!

You’re a senior, graduating in May. When you think about your future, what do you hope to give back to Plymouth State?

I hope to give the same thing that Plymouth State Field Hockey alumni have given to me: support, encouragement, and reminders to hold onto every moment.

My coach is very involved with her alumni and on game days, we get Facebook messages, e-mails, and texts from field hockey alumni from over the decades.

Before this season started, Coach shared an e-mail specifically addressed to the seniors, from an alumna sharing memories from her senior season and encouraging us to remember all of those last moments we’re going to have as the PSU Field Hockey team. 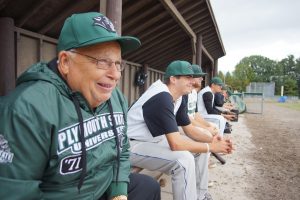 The top spot in the heart of Carleton Parish ’71 goes unequivocally to his late wife Sharon. After her firm hold on...
Copyright 2019 Plymouth State University
Back to top