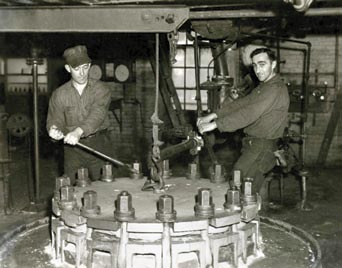 The Brown Company Photographic Collection, a collection of 11,000 photographs that chronicle the work and the people of Berlin, New Hampshire’s Brown Paper Company in the early half of the 20th century, has been archived at Plymouth State University for over 20 years. Now, thanks to modern technology and the collaborative efforts of Lamson Library’s Michael J. Spinelli Jr. Center for University Archives & Special Collections, the Karl Drerup Art Gallery, and the Center for Rural Partnerships, the collection is accessible beyond the PSU campus.

The Beyond Brown Paper Project, funded through a grant from the New Hampshire State Council on the Arts, is an exciting step forward in fully realizing an agreement made more than 20 years ago, when the Society for the Protection of New Hampshire Forests (SPNHF) passed the collection to the Institute for New Hampshire Studies at PSC. Part of the agreement between SPNHF and PSC read: “. . . that PSC remain sensitive to the collection’s value and general interest in Berlin and all prudent efforts be made to cooperate with local efforts to educate, publicize and reproduce or eventually exhibit parts of the collection.”

The Brown Paper Project is doing that—and much more. Using cutting-edge technology, the historic images depicting life and work in Berlin back when it was a booming industrial town have been scanned with preservation-quality resolution and are being made available through the project’s homepage at http://beyondbrownpaper.plymouth.edu/.  Anyone with an e-mail address can add comments to any of the images on display. There’s even an 800 number for those who feel more comfortable with a telephone to call in their comments and share their memories.

Taking It On the Road

To help spread the word about the Brown Paper Project and its home on the Web, Susan Jarosz, archival assistant, and I traveled to Gorham and Berlin earlier this spring for Northern Forest Days, a series of community events organized by the Northern Forest Center and more than a dozen local organizations across northern Maine, New Hampshire, Vermont, and New York.

It was a crisp, chilly spring morning, with perfect views of the Presidentials, when we arrived at the Gorham Family Resource Center’s community computer lab and began helping people access the photographs. They enjoyed the photographs, and we enjoyed their stories. One goodnatured gentleman by the name of Fred Smith worked in the Brown Company mills  many years and identified many of the people and activities in the Beyond Brown Paper photographs.

After some great conversations, we packed up our laptop and headed to Berlin for a story telling session at the Northern Forest Heritage Park. When we arrived, the stories were already in progress, many of them adding personal dimensions to the photographs we were to present.Many people vividly remembered the whistles that not only called workers to the mills but also regulated life for all residents of the town.

Throughout our presentation, people shared their stories and added interesting details. Toward the end, we distributed cards to all attendees depicting a panoramic view of the mills from 1928 with a description of the project and the Internet address on the back. The publicity clearly paid off: within the week many people added their comments to the project’s Web site. And since its launch in December, theWeb site
has had over a million hits.

With the help of technology, PSU is fulfilling the agreement made 20 years ago to not only house and preserve images of the Brown Paper Company, but to also share them with the world, and most importantly, with the town where it all took place.

Into the Enchanted Garden

Into the Enchanted Garden