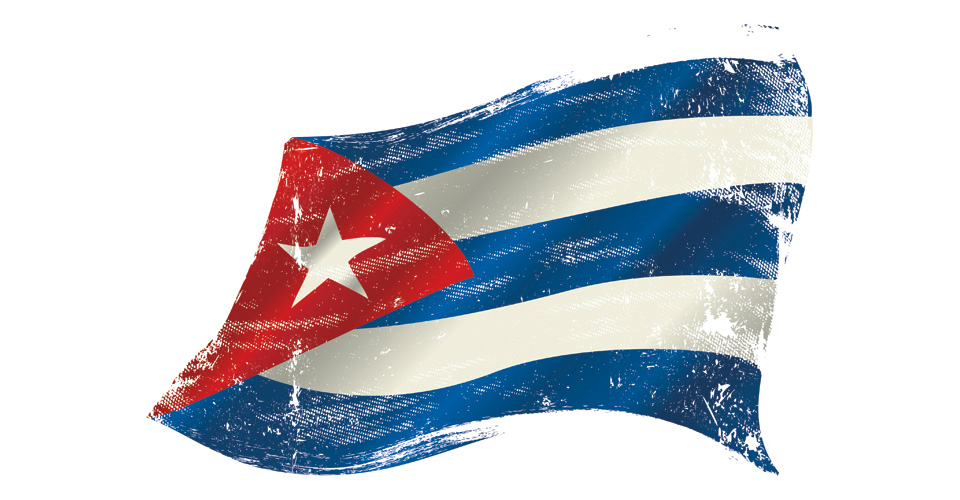 Professor of Political Science Filiz Otucu Ruhm is concerned about how the growth in Cuba’s tourism will affect the country’s culture and values. Photo courtesy of Filiz Ruhm.

Political science professor Filiz Otucu Ruhm always dreamed of going to Cuba. In fact, she planned on visiting the island more than a decade ago. “The social scientist in me wanted to observe Castro’s Cuba, then go back after Castro, and experience the changes,” she says.

Fidel Castro’s Cuba was marked by a boost in the nation’s literacy rates and the establishment of national health care and education programs, which elevated the Communist dictator to hero status in many Cubans’ eyes. At the same time, his nearly 50-year reign was also marked by human rights abuses, an antagonistic relationship with the US, and an economy that was heavily dependent on the former Soviet Union.

As it turned out, Ruhm didn’t get to see Castro’s Cuba. A native of Istanbul, Turkey, Ruhm earned her master’s and doctoral degrees in the US, and was looking to become a US citizen. Because relations between the US and Cuba were strained, she says, “I didn’t want the trip to create a problem for me when I applied for US citizenship, so I chose not to go.”

Ruhm’s dream to finally experience Cuba came within reach in December 2014, when US President Barack Obama and Cuban President Raul Castro, Fidel’s younger brother, agreed to restore ties between their respective countries after five decades of conflict. In the wake of that agreement, the US eased restrictions on travel to Cuba, and Ruhm decided to combine her longtime personal goal with an unprecedented educational opportunity for PSU students.

Ruhm designed a travel-study course for Winterim 2016, Access Cuba: History, Culture, and Environmental Sustainability. The course offered a one-credit option, in which students journaled about their experiences, and a three-credit option that combined journaling with a research project.

Daniel Spearman ’17, a political science major with a double minor in biology and peace and social justice, was one of the first students to sign up. “It was an incredible opportunity to visit a country that most Americans have been restricted from for decades,” he says. He also knew it would give him invaluable experience for the career in international relations he hopes to have after college. The intrepid travelers, sporting their “Where in the World is Plymouth State University” T-shirts.

On January 3, 2016, Ruhm and a group of 10 excited and adventurous students flew out of Boston Logan
International Airport for Miami, then on to Havana. During their 10 days on the island, they explored Havana Vieja (Old Havana), visited the Museum of the Revolution, toured coffee and tobacco farms, learned about alternative energy and agriculture in Cuba, and immersed themselves in vibrant Cuban culture.

Here are just some of the things the group discovered during their visit:

Ruhm and her students knew that entering Cuba would be like going back in time: Internet access and cell phone service were cost-prohibitive, and they’d have to operate on a cash-only basis since their credits cards would not be accepted.

What they hadn’t realized was, just because the US eased travel restrictions doesn’t mean that Cuba is ready for the flood of eager tourists that is now coming in as a result. “The Cuban tourist industry is overwhelmed,” says Ruhm.

“We found that out right away, from the time we landed at Havana Airport,” Spearman notes. “We waited on the tarmac for an hour because they only had one staircase. We later learned that the airport typically sees an average of only 20 planes a week. Six of them came in the day we landed.”

Ruhm and her students also learned that Cuban accommodations are woefully outdated. The Havana-based hotel they booked prior to the trip ended up not having enough rooms when they arrived, so the road-weary group had to scramble for lodgings on their first night in Cuba.

Over the course of their 10-day stay, they changed hotels 7 times due to everything from faulty lighting to flooding bathrooms. “One of the places we stayed was ranked only two stars, but it turned out to be one of the best hotels we stayed at during the trip,” says Spearman.

#2 Cubans excel at living sustainably because they have had no choice.

The collapse of the Soviet Union in 1991 had a profound impact on Cuba, which for decades depended on the Soviets for necessities such as food, clothing, and fuel. Throughout the 90s, Cuba struggled to become more self-reliant and in the process adopted a bicycle culture, developed urban organic farming practices, and launched reforestation efforts. These initiatives were so successful that in 2006, the World Wildlife Fund cited Cuba as the only sustainable country in the world. The country continues to be viewed as a model of sustainability. Even with its model organic farming practices in place, the island still must import about 80 percent of its food, which is then rationed. “Each month, Cubans get ration cards that they fill out when they go to the grocery store,” Spearman says, noting that the typical Cuban diet consists largely of rice and beans, which are cheap and plentiful. “We ate the same thing for lunch and dinner every day—black beans, rice, chicken or pork, shredded cabbage, and a fruit, usually papaya.”

Access to fresh water is also a challenge. Cuba’s economic decline, along with the country’s severe drought, has deteriorated water supplies and sanitation services. “Water is a huge issue in Cuba,” says Ruhm. “They need to recycle their water; they can’t afford to waste it.”

“There is no excess in Cuba; the supply isn’t big enough for excess,” says Spearman, who was so struck by Cuba’s sustainability efforts and the impetus behind them that he changed his research focus from healthcare to sustainability.

#3 Cuba has a dual currency system.

While in Cuba, Ruhm and her students learned about Cuba’s peculiar currency system: there’s the peso that Cubans use (also referred to as the “national coin”), and then there’s the convertible peso (or CUCs, pronounced “kooks”) that tourists use, which is worth much more. “What a tourist spends in a day, a Cuban would spend in a month,” notes Ruhm.

“Leaving one CUC as a tip to housekeeping is huge,” says Spearman, “considering they only make 20 CUCs a month.”

To make matters worse, while the average Cuban worker earns his or her wages in pesos, goods are priced in CUCs, making most foods and household items unaffordable.

As a social scientist and educator, Ruhm is deeply concerned about how the burgeoning tourist industry will shape Cuban values in the coming years. “Until recently, Cubans were very focused on education,” she says. “Because it’s free, many Cubans hold master’s degrees and PhDs. But now, in an economy where a taxi driver or housekeeper can make more than a surgeon or an engineer, where’s the incentive to get an education?”

#4 Cubans want good relations with us, but they don’t want to be us.

Ruhm and her students did more than just observe life in Cuba, they made a point to connect with its people. “The goal of this trip was to immerse ourselves in Cuban society, to get to know people from all walks of life: teachers, artists, activists, healthcare workers,” she says.

What Ruhm and her students found was, even with few resources and little money, the Cuban people they encountered were happy and lively—the opposite of the stereotypes that took root in the Cold War era. “We have this view of socialist societies as being grim and depressing,” Ruhm says, “but Cubans don’t feel oppressed, they feel free.”

And while many Cubans are hopeful for a better relationship with the US, they’re not looking to adopt the American way of life. “They don’t want their lives to change; they sincerely believe in the benefits of socialism—free health care, free education,” says Ruhm. “They want to keep that sense of security that, in the future, they know they’ll be taken care of.”

“They’re also proud of their culture and history,” adds Spearman. When it comes to historical events like the US embargo, the Bay of Pigs Invasion, and the Cuban Missile Crisis—events that destroyed relations between the two countries for half a century—the people he met “were able to separate the past from the present, and Americans from American foreign policy,” he says. The group traveled by boat to Guamá to explore a recreation of a Taíno village. The Taíno were the earliest known inhabitants of Cuba, and were known as peace-loving farmers, weavers, ceramicists, and boat builders. Photo courtesy of Filiz Ruhm.

#5 Ten days isn’t nearly enough time to get to know this beautiful and complex country.

Both Ruhm and Spearman would love to return to Cuba someday. “I’d like to stay in Cuba longer, talk with more people, and get their take on what’s happening to their country,” says Spearman. In the meantime, he’s putting the finishing touches on his research project and preparing to do an internship this summer with the United Nations. “Traveling to Cuba has shown me there’s so much more I want to learn and experience in the world,” he says.

Ruhm is thrilled to finally have had the opportunity to see Cuba and explore it with her students. Her one regret, she says, “is not getting to Cuba earlier.” It’s been just over a year since Americans have been able to visit Cuba with fewer restrictions, and in that time, the island has changed. “The change has been dramatic,” she says, “and it looks like it will continue to be that way.”
■ Barbra Alan PSU alumna and world traveler Claira Monier ’62 went to Cuba with an educational tour group in February 2014.“It was on my bucket list,” she says of her three-week trip. “Cuba is an island captured in time. It hasn’t been gentrified like other Caribbean islands.”

Like Professor Filiz Otucu Ruhm and her students, Monier discovered that the Cuban people are friendly, every hotel presents a different set of challenges, and the island is on the verge of big change in the wake of thawing relations with the US. She too would love to return in a few years, though she laments that “it won’t be the Cuba I saw.”

Here are some of her recommendations for what to see and do in Cuba:

VISIT Hemingway’s House in San Francisco de Paula. “It’s been so well-preserved, it’s as if he just left it. His books, his furniture, and his boat are all still there,” says Monier.

EAT Want an authentic Cuban dining experience? Eat at a paladar, a family-run restaurant in a private home. “Everywhere we went it was rice and beans and chicken—every meal,” says Monier. “The food may not have variety, but it’s absolutely delicious.”

DRINK Wind down after a day of sightseeing with a Hemingway-inspired daiquiri or mojito at one of his favorite bars, La Bodeguita Del Medio in Havana.

STAY Spend at least one night at the historic Hotel Nationale, which was built in 1930 and has hosted everyone from Winston Churchill to Frank Sinatra. It has retained its art deco design and is “absolutely fabulous,” says Monier.

SEE Cuba’s history: The Che Guevara Monument in Santa Clara and the Plaza de la Revolución (Revolution Square) are must-sees in Havana, and take in a rodeo at the King Ranch in Nuevitas, just for fun.

Claira Pirozzi Monier ’62 completed the second of her two four-year terms on the PSUAA board of directors in 2015, serves on the reunion committee for her class, and is a member of PSU’s Heritage Society.

A New Day, A New Way of Giving 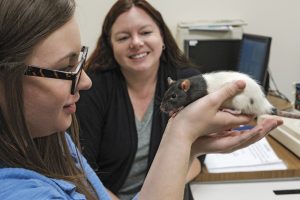 Seeing rats in a whole new light » They’ve taken the rap for the spread of the Bubonic Plague in Medieval Europe. Their...
Copyright 2019 Plymouth State University
Back to top