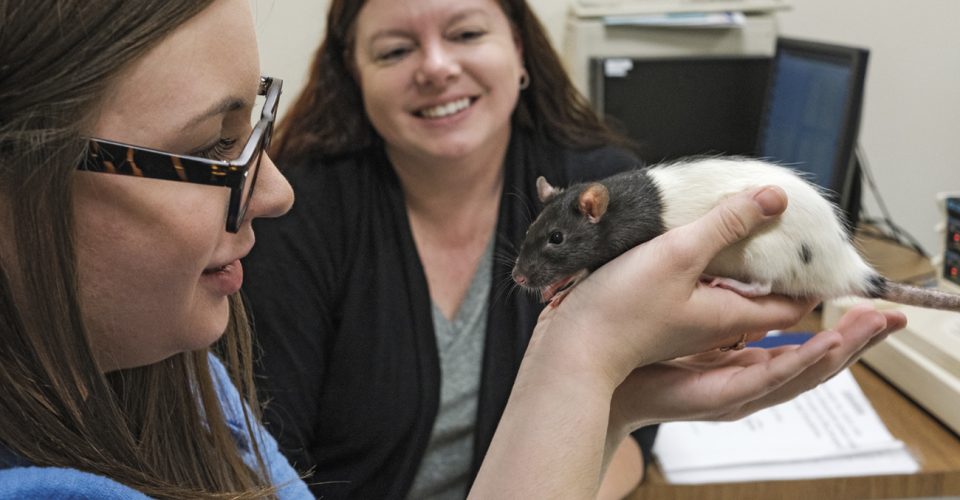 »
They’ve taken the rap for the spread of the Bubonic Plague in Medieval Europe. Their name is synonymous with scoundrel, traitor, and snitch. And then there are their tails: long and skinny, pink and seemingly hairless.

They’re rats, and they’re probably the last animals you’d think would make great companions, capable of bringing comfort to people and helping those with special needs. But did you know that these highly sensitive animals can be trained to warn their humans about oncoming seizures or spasms, or remind them to take their medicine, with just a lick of their little tongues? Or that simple interaction with rats can inspire smiles and laughs from autistic children, and help them develop their social skills? Or that their soft fur and twitching noses can raise the spirits of nursing home residents?

Professor Clarissa Uttley is on a mission to improve the rat’s image, one student at a time.

Animals in the Classroom For centuries, rats like Daisy (above, and top, with Professor Clarissa Uttley) have gotten a bad rap. Now, we’re starting to see rats for what they really are: highly sensitive, intelligent, social, and wonderful companion animals. Kaleb Hart ’11 photo.

Uttley began working with rats as an education specialist at the Capron Park Zoo in Attleboro, MA. “One of my favorite programs to present was called Animals That Nobody Loves,” she says. From snakes and tarantulas to opossums and rats, Uttley would introduce visitors to some of the world’s most reviled creatures and debunk some myths in the process. “Making the case for misunderstood animals became my passion, and watching the shift in people’s thinking about these animals inspired me to become an educator and to research human-animal interaction.”

For the past three years, Uttley has taught the first-year seminar course Can Animals Help Us Heal? She invites guest speakers and their animals—cats, dogs, and horses—to campus, and exposes students to the benefits and challenges of including animals in therapeutic interventions and companionship. “Then I encourage the students to critically evaluate these practices themselves,” she says.

One semester, Uttley brought two of her companion animals, rats named Millie and Minkie, to class and proceeded to demonstrate how these highly intelligent, trainable, and social animals can help people with special needs. “You can imagine what some of the students said,” she laughs. “But after learning the rats’ names and watching me interact with them, the students became more comfortable and several wanted to hold or pet them. This confirmed my hypothesis that exposure to an unknown can lead to better understanding.”

Some of Uttley’s students have become so comfortable with working with rats in class that they’ve volunteered to care for and work with them outside of class. “Through prolonged interaction with their rats, students ended up bonding with them, and became concerned for their well-being,” she says. In addition, several students were invited to bring their rats to PSU’s Center for Young Children and Families so the children there could interact with them and care for them. The rats quickly won the hearts of the preschoolers.

While not all of Uttley’s students completely warm up to the rats, she says that by semester’s end, they all report a positive change in their attitude toward them and a respect they never thought they’d feel for these much-maligned creatures.

In addition to her teaching, Professor Clarissa Uttley oversees the PSU Pet-Assisted Therapy Program, which gives students the opportunity to interact with certified therapy pets such as dogs and horses throughout the semester. The program is a hit with students looking to reduce stress, anxiety, or homesickness—or who simply need to snuggle with a furry friend. 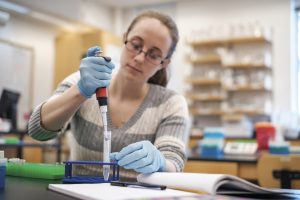 PSU researcher hopes to improve cardiovascular patients’ long-term outcomes » A broken heart and a heart attack may not have...
Copyright 2019 Plymouth State University
Back to top