Langdon Woods: A Deeper Shade of Green at PSU 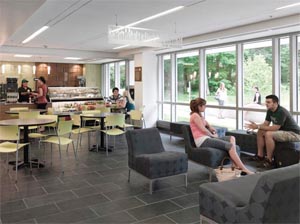 “For peace, solitude, and comfort, one need go no further than the woods of Langdon Park. Many a student, blue and discouraged,has left her burden there and returned to work with renewed hope for the future.”—Excerpt from Langdon Park, ”an essay published in the 1931 Conning Tower yearbook, written by New Hampshire State Normal School senior Mary E.Coleman.

Since 1917, when Woodbury Fogg Langdon of Plymouth deeded land to the State Normal School for its “sole and unrestricted use and benefit,” Langdon Park has been a place for students and community members to connect with and study nature, hike and bike scenic trails, enjoy picnics and swim parties, and more. But in September 2006, the park became something more than a place of recreation, it became the site of PSU’s newest residence hall, Langdon Woods.

“The Woods,” as it is known by many of its residents, is the first New Hampshire building and one of the first and largest residence halls in the country to receive gold-level certification from the U.S. Green Building Council’s Leadership in Energy and Environmental Design

PSU is a green campus and has a history of championing initia­tives, buildings, programs, and curricula that are environmen­tally responsible. Langdon Woods has placed the University at the forefront of the environmental sustainability movement taking place on college and university campuses throughout the state and across the country. Accord­ing to University System of New Hampshire (USNH) Chancellor Stephen Reno, “Plymouth [State University] is really setting the pace for the rest of the university system in terms of new construc­tion. We’re looking for every opportunity to duplicate what has been done here.”

Planning for the residence hall began in fall 2004 and involved a large on-campus team led by Vice President of Financial Af­fairs William Crangle. The team included USNH and its board of trustees, the Town of Plymouth planning and select boards, ar­chitects, engineers, builders, sup­pliers, and PSU students. “From the beginning, students were involved in planning for the facil­ity, and we included a number of classes in planning for the LEED certification,” Crangle noted. Ad­ditionally, the building’s design and amenities—which include a café, laundry facilities, and an exercise room—were driven in large part by results of student surveys, citing what students felt was needed in a residence hall.

As a certain famous frog once pointed out, it’s not easy being green. The building site for Langdon Woods posed a few chal­lenges for the designers—namely, a wetland, a streambed, wood­lands, and rock formations. But with challenge came inspiration. To avoid the cost of blasting and reforming the site to make it flat enough to build on, the design team proposed a tall, narrow, undulating building that follows the site’s contours, capitalizes on its flattest areas, covers previ­ously developed parking areas, and respectfully preserves the woodlands, the wetland, and other features. “We instituted a sustainable site strategy, which included a landscape and design that make attractive use of the existing natural shade of the ad­jacent Langdon Park to minimize energy use for cooling the build­ing in the summer,” explained Crangle.

Because building materi­als were a key consideration in Langdon Woods’ sustainable design, nearly 20 percent of the building’s brick, wood, and glass construction materials came from recycled material, and nearly half of all building materials were manufactured within a 500-mile radius to minimize the environ­mental impact of transportation and shipping. In addition, almost 69 percent of the wood used in the building is certified in accordance with the Forest Stew­ardship Council’s Principles and Criteria. Over 75 percent of the building site waste, which might have been shipped to a landfill, was instead either salvaged or recycled through a waste manage­ment program.

Inside the five-story, 114,000 ­square-foot residence hall, water-efficient strategies, including dual-flush toilets, waterless urinals, and low-flow faucets and showerheads, result in Langdon Woods using 36 percent less water per year than a residence hall without such devices. Its large insulated windows do more than just afford great views and let in plenty of natural light; they reflect heat away in the summer months while projecting radiant heat indoors in the winter. The roof works much the same way. And a cogeneration plant housed on campus transports its heat by-product through underground pipes to Langdon Woods, provid­ing the primary heat source for the building. It’s a system so effi­cient that last winter the building used the equivalent of only four days of heating fuel.

For these reasons and more, Langdon Woods was a natural to earn the LEED gold certification. But what is it like to actually live there? For some students, like Peter Laufenberg ’07, a current MBA student who is now in his second year at Langdon Woods, the presence of recycling stations on every floor, the availability of organic cleaning supplies, and “green building” education ma­terials throughout the residence are simply part of everyday life. “It’s great that [the building is] environmentally friendly, but it’s not in your face,” he said.

English major Kaitlin Jones, who also is in her second year as a Langdon Woods resident, noted that the building’s environmen­tally conscious amenities “have made me more aware of my own habits and surroundings. I find myself getting frustrated when people waste paper or when a building doesn’t have recycling containers.”

“We are developing our students’ life skills as they learn to live in an environmentally sustainable community,” PSU President Sara Jayne Steen explained. “Ques­tions of climate, the environment, water systems, energy conserva­tion, fuels, and sustainability will be an even more vital part of our future curriculum, research, and campus processes.”

Indeed, Langdon Woods is an integral part of a comprehensive environmental sustainability program the University is incorporating to reduce its environmental impact and raise awareness.

In the spring, President Steen signed the American College & University Presidents Climate Commitment, pledging PSU’s participation in a broad effort by the nation’s higher education institutions to address global warming by neutralizing their greenhouse gas emissions and accelerating research and educational efforts to equip society to restabilize the earth’s climate. She also created the President’s Commission on Environmental Sustainability to manage the University’s current commitments and develop forward-looking strategies and achieve goals.

The University is also in the process of creating an interdis­ciplinary environmental studies major. “The program design will be innovative in a number of ways, including the diversity of specializations students can focus on and the emphasis on the applications of skills to regional issues,” said Brian Eisenhauer, associate director of PSU’s Center for the Environment. “The pro­gram will include both natural and social sciences and offer PSU students a unique and formative educational experience that can contribute to the well-being of the region and the state.”

[Editor’s note: Thanks to Plymouth Furniture Company and PSU’s Athletic Department for their contributions to the Langdon Woods photo shoot.]

The Global Classroom Blogging at PSU 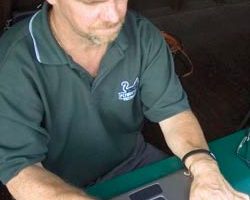