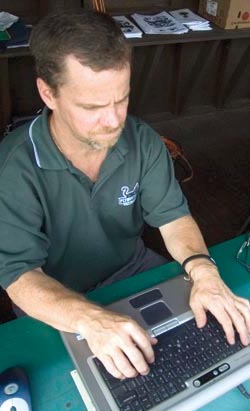 Plymouth State University has 19 women’s and men’s sports teams that play more than 250 games during the school year. It’s the job of the sports information director (SID) to ensure each game is promoted and the highlights and scores are publicized. It’s also the SID’s job to produce the athletic department’s publications and maintain its pages on the PSU Web site while overseeing home-game management. That’s a full plate by anyone’s standards. But it’s all in a day’s work for Kent Cherrington. Fortunately, the information age makes Cherrington’s awesome task of single-handedly promoting and publicizing PSU sports a bit easier.

When Cherrington joined Plymouth State College as SID in 1994, his state-of-the-art office technology included an electric typewriter. The Internet was still in its infancy and Plymouth State’s Web site was still a few years away. Cherrington would make notes and capture game statistics on paper, then contact local papers to convey the stats after the games. Today, he makes notes and compiles stats, writes press releases, and e-mails his contacts at the local papers all from his laptop, which accompanies him to games at PSU and on the road.

Leveraging technology on the job is nothing new to Cherrington. He was among the first SIDs in the country to do game-time computerized statistics in the late 1980s, when he was an assistant SID at Miami University in Oxford, Ohio. He also helped introduce StatCrew, a scoring and statistics software package, into the profession. Today, just about every college and university in the country uses StatCrew. In the late 1990s, Cherrington helped Plymouth State develop one of the first comprehensive athletic department Web sites among U.S. colleges, complete with schedules, rosters, results, coaches’ profiles, photos, and game coverage.

“When you look at PSU’s Web site statistics, one of the most visited sections of the PSU Web site is athletics, and I attribute a great deal of that to the work of Kent Cherrington,” said PSU Athletic Director John P. Clark.

Cherrington enjoys maintaining the department’s Web site because he is able to provide greater PSU sports coverage than ever before. “We can’t control what or how much the newspapers print about our teams and athletes or what stories get on TV,” he said. “But with the Web, we can report the success and accomplishments of our players to an even larger audience.”

While the Web has, in many ways, made Cherrington’s job of game promotion and publicity easier, he notes that it also has added to his workload. “No matter how much you do with [the Web], there’s always more you can do,” he said. “The technology is always changing, so there’s always more coming down the pipe.” Whatever advances the future may bring to his profession, it’s clear Cherrington will be ready for them. “Kent has been able to keep up with the times and has taken this on as the same one-person shop as it’s always been,” said Clark. “He’s never had any staff added, and he relies strictly on the help of students to get the job done.”

“Being around the students is one of the most rewarding parts of my job, whether it’s the student athletes or my student workers. They keep me young, and I couldn’t do this job without them,” said Cherrington.

“Many of my former student workers tell me after they’re out in the working world that they learned as much working for me as they did in many of their classes. And when students thank me for doing what I love to do, there’s nothing better than that.”

Langdon Woods: A Deeper Shade of Green at PSU 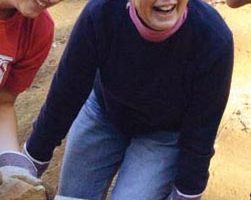 by Kevin D. Anderson For Nancy Conklin, there was no great awakening or a voice telling her to do something; there was simply...
Copyright 2019 Plymouth State University
Back to top