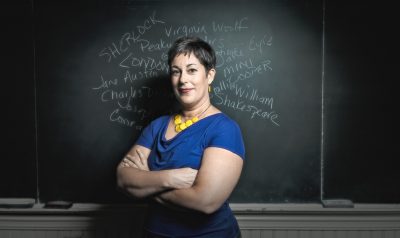 Plymouth State University has named Jason Moran as its new dean of enrollment management. Moran brings more than a decade of experience in higher education admissions to PSU, having launched his career with Lycoming College in 2004 as an admissions counselor, then as assistant director of admissions before being named director of admissions in 2011. While at Lycoming, Moran helped to lead recruitment and enrollment efforts for the two largest new student classes in the college’s history and participated in strategic efforts that led the college to enroll the most diverse class in the college’s history.

“My family and I are thrilled to join the PSU community. I’m especially excited to join an enrollment team and a university community that has experienced two straight years of record enrollments and I look forward to working to meet and exceed future enrollment goals.”

Plymouth State University has appointed Tracy L. Claybaugh as interim vice president for finance and administration. Claybaugh, who started at PSU in late July, was most recently the financial officer at Penn State University’s Behrend Campus in Erie, Pennsylvania.

In her role as financial officer at Penn State University, the Behrend Campus, Claybaugh was responsible for the college’s $52 million budget, finance and administration, compensation program and various special projects associated with new construction, buildings and general operations.

“I am so honored and excited to join an institution as beloved as PSU,” said Claybaugh. “I was captivated by how much PSU has to offer the students and the community. I am also particularly enthusiastic about working with a dedicated group of higher education professionals who are so devoted to the University’s mission and the students.” Professor of English Ann McClellan was recognized for her commitment to research and scholarly pursuits, as well as for her service to campus and beyond at the President’s Autumn Gathering on Monday, August 22.

The Award for Distinguished Scholarship is presented annually to a member of the faculty whose body of creative and scholarly works is recognized for its rigor, originality and expressiveness, both within and beyond the Plymouth State community.

The Award for Excellence in Faculty Service is presented annually to the faculty member who best exemplifies the goal of balanced and sustained service that has had a quality impact on the campus, the faculty member’s profession or the broader community. The recipient of this award exemplifies dedication and sustained service, as suggested in PSU’s motto, Ut prosim (That I may serve).

“I am incredibly humbled and honored to receive both the distinguished scholarship award and outstanding service award this year,” said McClellan. “I’m grateful every day to work with such amazing thinkers, compassionate and innovative teachers and dedicated university colleagues who are invested in bettering the lives of our students.” Plymouth State University’s online MBA in Healthcare Management has been named by Healthcare Administration Degree Programs (HADP) as one of the top 10 in the nation for affordability and for students’ ability to complete the program in one year. HADP provides resources to help prospective students find the best values in both undergraduate and graduate degree programs in healthcare administration. The Star Wars tree was among the trees raffled at the event to raise funds for scholarships.

Festival of Trees has become a beloved part of the Plymouth community’s holiday tradition. The event, celebrated on the first Friday of December during Plymouth’s Hometown Holiday Celebration weekend, was founded by Plymouth State Executive Assistant Tamara Cocchiarella ’11 and Donor Relations Manager Diane Tiffany ’76 in 2008 to offer the University a fun and festive way to support PSU students.

The committee raises its endowment through a raffle prize ($5 for 20 tickets) of festively-decorated trees from various PSU departments. The money is then dispersed through scholarships in the following spring to aid New Hampshire resident students in need. Last year, the committee awarded three $1000 scholarships, and four $500 scholarships.

Among the trees created were a Star Wars-themed tree designed by PSU’s Marketing Communications and Creative Services office, and another tree, covered in smiley faces and aptly called “Happiness Quest” was designed by the campus organization Philosophy 4 Life. One of the most coveted trees this year depicted the Abominable Snow Monster from Rudolph (1964) designed by Information Technology Services, which also came with a refurbished laptop. The Abominable Snow Monster was a huge hit with families–and it came with a laptop!

Matty Leighton, a scholarship committee member, recounted an emotional moment when the raffle winners were announced.

“The family who won the ITS tree were thrilled because the mom’s laptop had just broken and they didn’t have money to buy another one,” said Leighton. “They didn’t even know the laptop was included with the tree until we handed it to them.”

Committee members often credit the event’s ability to bring the University and town closer together as their main reason for getting involved. Randy Szabadics, student life receptionist, is a four-year veteran of the committee and got involved out of his desire to be more involved with the PSU campus.

“Having families and children come to see all the trees and try to win them is amazing,” said Szabadics. “Making the call and hearing a kid scream in excitement in the background when you tell them they won the ‘Star Wars’ tree or the ‘emoji’ tree is awesome. It seems small, but it can mean all the world to someone.” – Emmett Warren ’16 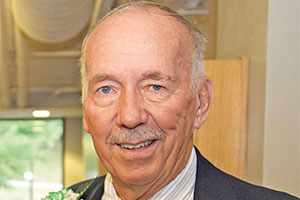 If you’re a proud Plymouth State Panther, you have Dick Chandler and his classmates in the Class of 1963 to thank. While...
Copyright 2019 Plymouth State University
Back to top