Einarsdottir, an exercise and sport physiology major, competes on the University’s Alpine ski team and will be PSU’s first student-athlete to perform on the Olympic stage. She credits Plymouth State for helping her reach this longtime goal.

“Training and racing with PSU has helped me immensely. Having the opportunity to train close to home with good conditions is something that I don’t have at home. It has helped me improve as an athlete and at the same time I’m getting a great education.”

Einarsdottir was given a PSU necklace after returning to Plymouth following the National Collegiate Athletic Association championships last year and, if rules permit, she hopes to wear it or another University “good luck charm” during the Olympic competition.

The PSU community is encouraged to watch for details concerning a planned campus watch party and other Olympic-themed events. 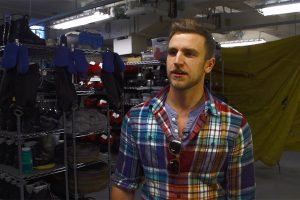 Vincent Lapointe-Deptula ‘21, former Coast Guard rescue swimmer, is always seeking his next challenge. This year he set his sights...
Copyright 2019 Plymouth State University
Back to top