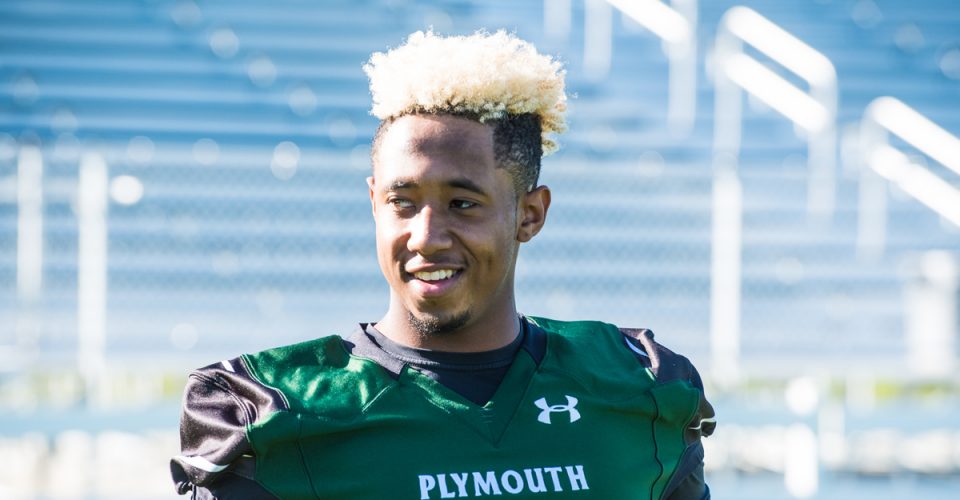 Plymouth State’s “tomorrow changers” take charge of their destinies by making the most of all that the University has to offer. Elijah Johnson ’18 came north looking for a challenge, and four years later he credits PSU with encouraging him to go farther than he previously thought possible.

Plymouth is very different from Johnson’s home near Hartford, CT. The high school football talent had closer college options but he took a less familiar road, and that has made all the difference.

“What drew me to PSU was that I knew I would need to put myself in different situations and have to grow up a little,” says Johnson.

College represented much more than earning a degree for Johnson, who aimed to put his family on firmer footing. “There were a lot of situations back home that weren’t the greatest and I didn’t want to get myself involved in them,” he says evenly. “I knew that I wanted to do well for myself and be able to help people back home. I wanted to be a good influence, someone who people can look up to.” 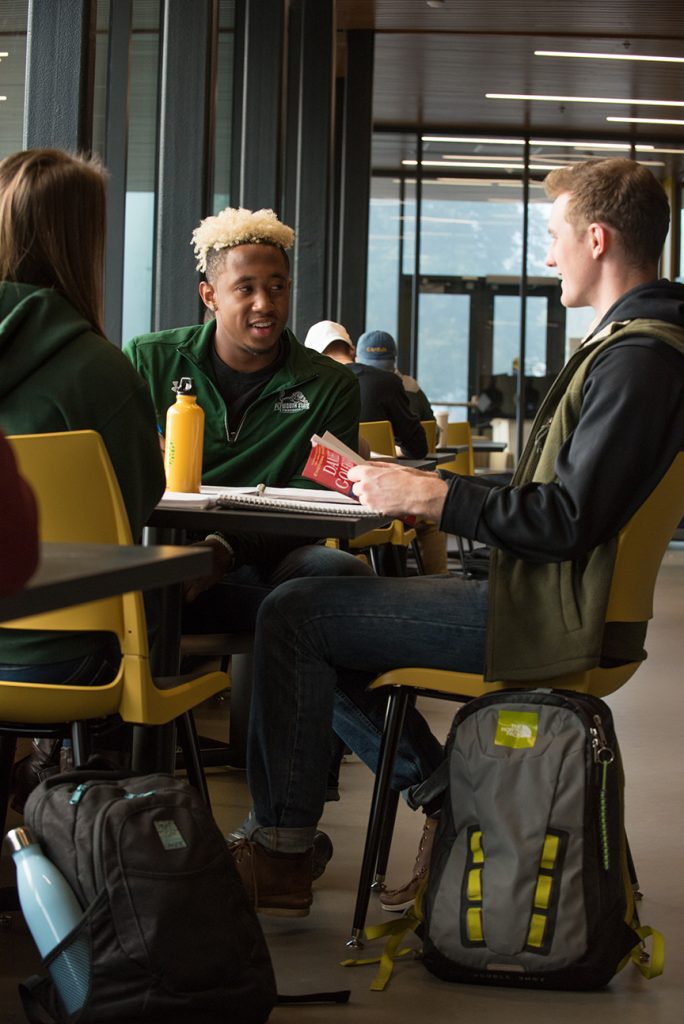 “I’m very thankful for the opportunities that Plymouth State offered me,” says Johnson. “There are a lot of great people here, and you need to be open and willing to take advantage of those opportunities.”

Johnson’s high school team had turned around a losing record, so he wasn’t discouraged by a PSU squad that won only two games the season before he arrived. His goal to “grow up” was realized with the help of life lessons from PSU Head Coach Paul Castonia, a 32-year veteran of college coaching.“Over the last two years, he was the voice of reason with some of the young kids,” says Castonia. “He progressed as much or more as anyone we’ve had come through the program.”

The team won only one game in Johnson’s first year but made steady progress, culminating in a thrilling senior season of nine wins, the conference championship, and PSU’s first NCAA Tournament contest in years. Yet this Hollywood ending might never have happened if the Plymouth State community hadn’t had Johnson’s back.

“Your grades have to be really good—you don’t get scholarships with C’s,” Schwartz counseled.

“He’s exactly the kind of kid that you’d want to invest in because he’s not going to let you down,” says Schwartz.

“PSU helped me out with scholarships and jobs,” says Johnson. “I’m thankful for those opportunities but I wouldn’t have been able to stay unless I took advantage of them.

“The big thing is, all of these people still check in on me,” he continues. “On top of that are my teammates, including ones from years ago that I’m still in touch with.”

“Elijah embraced our community and understood the value of working toward his future,” says Scheinman. “He has a tremendous work ethic.”

The football team’s resurgence and Johnson’s personal accomplishments parallel the arrival of ALLWell North. The magnificent athletics complex, which opened in 2016, was “just a hole in the ground” when Johnson arrived, recalls Coach Castonia. “ALLWell was huge for us,” says Johnson.

Football’s demands provided a solid basis for Johnson’s studies. A business management major in the Professional Sales Program, he qualified for the invitation-only, competitive sales course. “Expectations are high,” says Professor Robert Nadeau ’06MBA, who directs the program. “Elijah was driven and clearly wanted to make a difference.”

Johnson acknowledges Scheinman for emphasizing the Panther credo of “paying it forward,” which Nadeau sees as an excellent fit for Johnson’s disposition. “He has zero sense of entitlement and a high level of emotional intelligence,” says Nadeau. “He empathized with other students and reached out to help.”

Johnson coached and mentored younger sales students, and in April he attended the National Collegiate Sales Competition, a prime networking forum. “My goal was to look for opportunities not only for myself, but for other PSU students who could benefit as well,” says Johnson.

Hard work and a positive attitude were rewarded with several job offers, and Johnson accepted a position with DHL, an international shipping and logistics firm.

“I’m very thankful for the opportunities that Plymouth State offered me,” says Johnson. “There are a lot of great people here, and you need to be open and willing to take advantage of those opportunities.”

Visit @friendsofplymouthstatefootball on Facebook for Panther Gridiron Club news, team videos, and to connect with fellow fans. Club activities include fundraising in support of the football program’s daily operations, as well as capital improvements such as the Stadium and Turf Field Project. 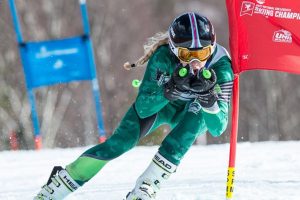