Students honor Berlin’s past through art

In its heyday in the early twentieth century, the Brown Company’s Research and Development building in Berlin, NH, housed scientists who were pioneering innovations in the pulp and paper industries, transforming the use of forest products, and enhancing the value and productivity of forests across New England and the world.

Nearly a century later, the abandoned building was looking every bit its age, with smashed-out windows that left its interior vulnerable to even more vandalism. But thanks to a creative partnership between PSU and the Northern Forest Heritage Park, the building’s façade has gone from eyesore to eye-catching. Last summer, a 768-square-foot mural, composed of two dozen 4′ x 8′ paintings, replaced the broken windows, not only beautifying the exterior but also protecting the interior of the building, which is currently being renovated for a visitor’s center.

The partnership began when Jim Wagner, project manager with the Northern Forest Heritage Park and the Brown Company Research and Development (R & D) Building Rehabilitation Project, contacted Thad Guldbrandsen of PSU’s Center for Rural Partnerships, with whom he had worked on previous projects, and pitched the mural idea. Guldbrandsen in turn discussed the idea with College of Arts and Sciences Dean Cynthia Vascak and art department faculty member Tom Driscoll ’83, who offered to create a public mural course for the spring 2011 semester.

ALL TOGETHER NOW: "Working as a group was a little difficult, more in the design process of the painting than with the actual painting," says Craig Maines '12. "Once we worked out all the conflicts, we were able to paint as one."

Driscoll spent the summer of 2010 designing the special topics course and researching materials. The first class was held February 2011 in Berlin, where the students examined the building, measured it for the mural panels, and talked with Wagner about his expectations. They also toured the Brown Company House Museum, which features historic logging photographs and equipment, and Wagner’s own collection of historical Berlin photos and artifacts.

Back at the art studio in the Draper & Maynard Building, students split into three groups of four and spent the first six weeks of the semester researching the history of Berlin and the Brown Company and its R & D building, developing themes for each group’s concept, and learning to work as a team. “I made a promise to myself when the project began to leave my ego at the door and be open-minded,” says Kristin Sarette ’12. “Because I was able to do that, I learned so much from the process and my peers.”

Driscoll says visual continuity was essential—horizon lines had to work from panel to panel and changes in seasons and weather throughout a year had to be reflected. Repetition of patterns and shapes and color would lend unity to the designs. “There can’t be any interruption from panel to panel of a mural,” he says. 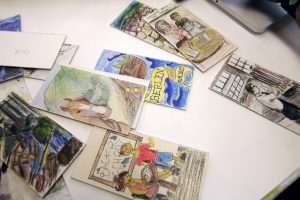 Concepts for the mural.

Each team mounted their 24 concept drawings on craft paper, replicating what they would look like on the building, and made professional presentations to Wagner, who had to select one concept on which they would all continue to work.

“I was impressed by the professionalism and the knowledge, energy, and effort the students brought to this project,” Wagner says. “And I had the unenviable task of selecting just one concept from the three.”

The students then had about eight weeks left in the semester to prime, sketch, fix, paint, and seal the panels—24 complete paintings to complete in just a few days apiece. Class met twice a week for two hours, and students were required to spend an additional four hours a week on assigned tasks between classes. It was an awesome amount of work, but the students met their end-of-semester deadline.

During the course of those intense weeks, the students learned about organizing a large-scale project and what makes a mural work, evaluating and pricing materials, budgeting, selecting materials best suited to a job, researching content, communicating and providing usable feedback, and how to relinquish their usual solo technique to support each others’ ideas. Last October, the students, along with Driscoll, were recognized by the New Hampshire Preservation Alliance for their role in preserving and promoting Berlin’s heritage.

According to Wagner, it’s an honor that was hard-earned and well-deserved. “The students had an opportunity to be engaged in our community’s history,” says Wagner. “They’ve taken on the passion and the emotion and the strong feelings that we as a community have felt for more than a hundred years, and they truly understood and captured that in the mural.”

Tara Krehbiel ’11 says, “We didn’t want to just give Berlin a mural—we wanted to blow them away with something they could admire for a long time.”

Berlin will certainly have a chance to admire the mural for many years to come: Once the interior renovation is complete, the panels will be moved inside and displayed as a permanent exhibition in the visitor’s center.

“This group of young artists did an amazing job on the project,” says Driscoll. “They worked cooperatively and tirelessly to create a mural that paid homage to the cultural and historical significance of the city of Berlin, while also reflecting the high aesthetic standards of the art department at PSU. I’m fortunate to have been able to work with them. They’ve left a legacy that the people of Berlin and the community of PSU can be proud to claim.” 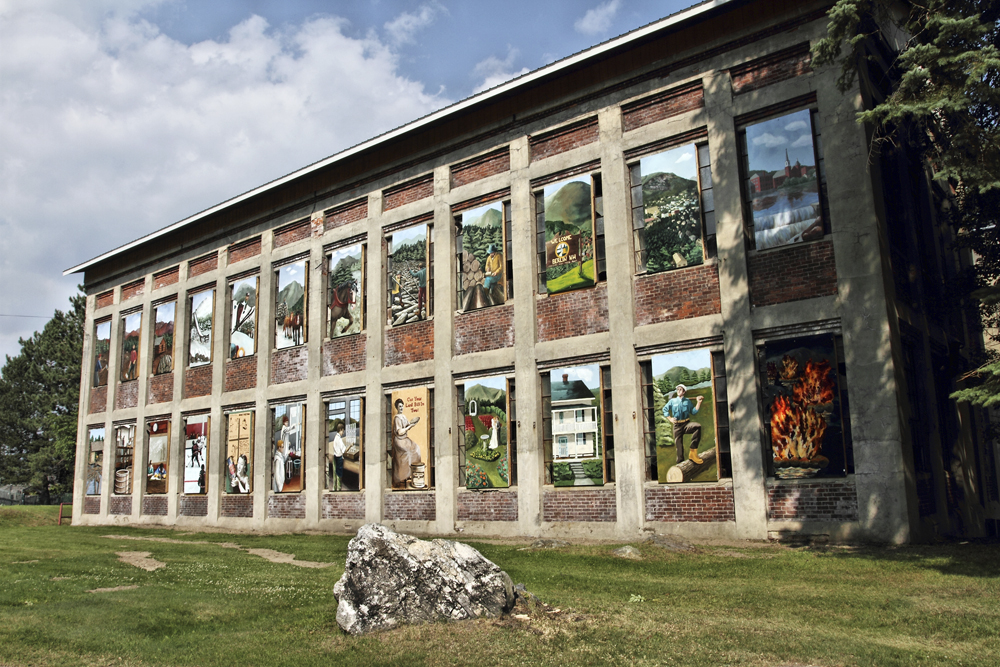 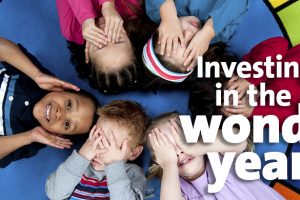 by Emilie Coulter Early childhood development is our best bet for improving the overall health of a community, says Pat Cantor,...
Copyright 2019 Plymouth State University
Back to top