Faculty Forum: Is There an App for That? Child development in a media-saturated world

Patricia Cantor and Mary Cornish are professors in the early childhood education program who for years have studied and presented on the potential impact of screen media and technology on infants and toddlers. The pair recently collaborated on a textbook on this topic, published last fall. Techwise Infant and Toddler Teachers: Making Sense of Screen Media for Children Under 3 serves as a guide for teachers and caregivers on how to make sound decisions about screen media to optimize the learning and healthy development of infants and toddlers. Below, Cantor and Cornish share what they have learned through their research on the so-called “Touchscreen Generation.”

Infants and toddlers are living in a screen media-saturated world. Every day, an ever-growing number of apps, TV shows, electronic toys, and e-books are being developed and marketed for the entertainment and education of children under age 3. Never before have so many different kinds of technology been available, and never before have children from birth to age 3 experienced screen media to such a great extent.

The full impact of newer technologies, such as apps and e-books, on infants’ and toddlers’ learning and development is not yet understood. But decades of research about television and videos have yielded evidence suggesting that the use of screen media by very young children is associated with higher risks for obesity, attention problems, sleep deprivation, language delays, and aggressive behavior. Even just being exposed to “background television,” or television on in the same room where they are playing, has negative implications for babies’ language development and social play.

Despite marketing claims that screen media products can set babies on the path to become little Einsteins, the evidence is clear that infants and toddlers are much more likely to learn from real-life, personal interactions than from what they see on a screen. Infants and toddlers have a harder time processing two-dimensional images, like those on a screen, than the three-dimensional images of real life. As noted in the American Academy of Pediatrics 2016 statement on Media and Young Minds, “Because of their immature symbolic, memory, and attentional skills, infants and toddlers cannot learn from traditional digital media as they do from interactions with caregivers.”

If very young children are exposed to screen media, they should not be left to use it by themselves. Rather, a caring adult should interact with the child during the media encounter, engaging the child in conversation, helping the child make connections to his or her own experiences, and supporting the child’s understanding of the media content.

No Substitute for Nurturing

Children born since 2010, when apps first came on the scene, have been called the “touchscreen generation.” But despite the omnipresence of screen media in their lives, infants and toddlers today learn and grow in the same way that generations before them have. In order to thrive, they need responsive interactions with attentive adults, opportunities to play, move, and explore with all their senses, and rich experiences with language—being read to, sung to, and talked with. Infants and toddlers learn in the context of nurturing relationships with caring adults. There is no app that can substitute for that.

Gratitude for the Formative Years 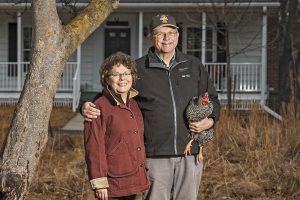 Gratitude for the Formative Years

Since her Plymouth State College days, Marion (Fellows) Patterson ’71 has looked back on those formative years with gratitude...
Copyright 2019 Plymouth State University
Back to top