PSU’s newest major is training the nurses of the future

Watching someone you love endure chronic pain is incredibly difficult. Bill Eissler knows: his mother has suffered from chronic pain for years, and he has been by her side for countless medical appointments and procedures. Three years ago, she underwent hip replacement surgery. “I saw how the nurses were able to make my mother comfortable and put her at ease, and how their care was immediately benefiting her,” he says. “And I could see that they really loved what they were doing. I wanted to be part of that.” 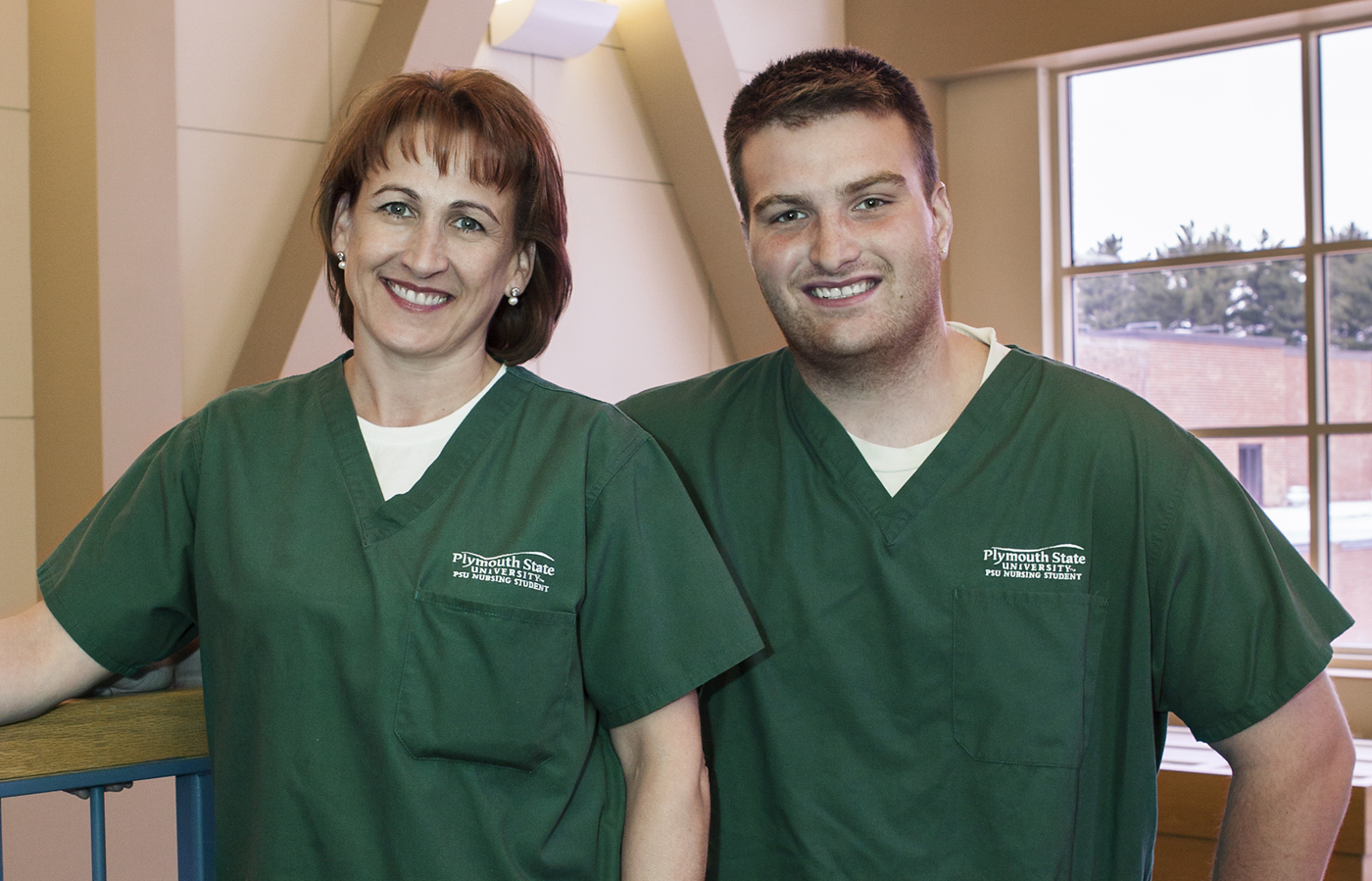 In spring 2011, just before earning his bachelor’s degree in physical education with an option in applied health fitness from PSU, Eissler made the decision he had been contemplating for years: to apply to nursing school. “I was actually looking at other schools,” he recalls. But timing is everything—in April 2011, PSU announced it would offer a bachelor’s degree program in nursing starting in the fall 2011 semester. “When I learned that, I was excited that I could stay here,” says Eissler, whose residence hall is just across the street from the Department of Nursing’s home in Mary Taylor House. “I was comfortable here, and I thought it would be cool to be in the first nursing class at PSU.”

Clearly, Eissler wasn’t the only one who wanted to be part of the history-making launch. “Our first year was filled almost immediately,” says Mary Bantell, professor and chair of the Department of Nursing. Ninety students were accepted into the program, which offers two tracks: a four-year traditional undergraduate program for students who do not hold an RN license, and an RN to BSN completion program for students who hold an associate’s degree in nursing and have a current license to practice as a registered nurse. Students take courses year-round, including summer, with some courses offered on Saturdays. Starting this summer, the courses in the RN completion track will be offered completely online. “Many of the students in our RN to BSN completion program population are working full-time and have families and numerous other responsibilities, so offering the completion program online gives these students more flexibility and increased access,” explains Bantell, who launched a similar, and very successful, initiative as a member of the nursing faculty at Texas A&M.

Bantell began her directorship last July after teaching at Texas A&M for six years and immediately got to work in developing the curriculum for the program. She credits Mary Ellen Fleeger, former USNH associate vice chancellor for academic and student affairs and now a member of Keene State College’s nursing faculty, with creating a solid framework for the curriculum during the nursing program’s earliest days. “She was the one who really developed and started this program at PSU,” Bantell says. “She had the vision to create a curriculum that is evidence-based, and informed by findings from the Institute of Medicine (IOM) and integrating the Nurse of the Future Competencies (NOFC). There are schools that are revising their curricula to reflect the latest in nursing, but here we are, starting as a new program, with the NOFC as our conceptual framework for our curriculum.” 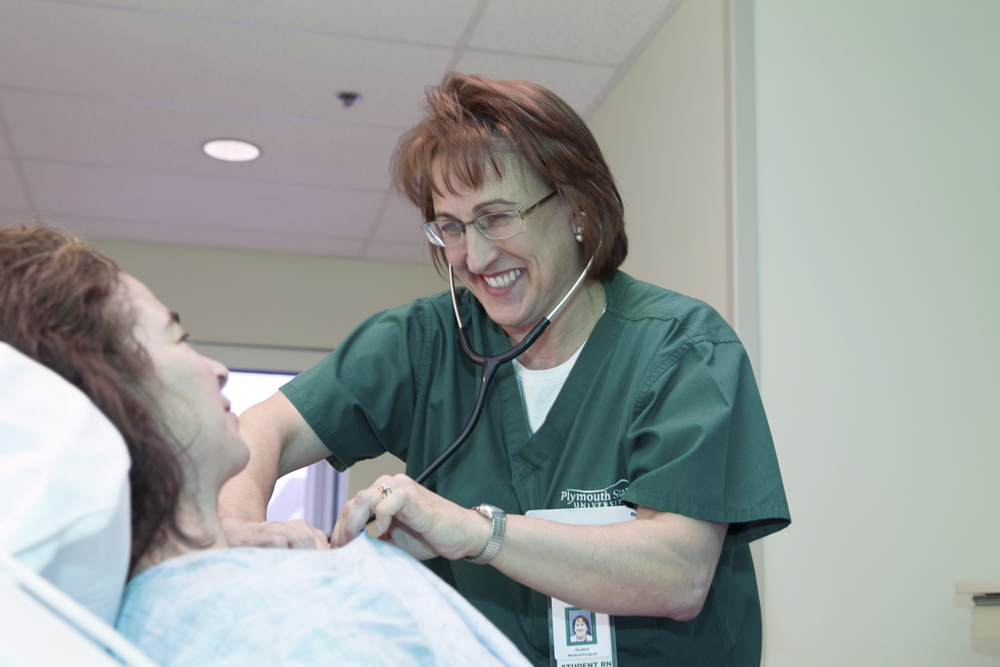 Nathalie Strickrott, right, is looking forward to a career as an ER or ICU nurse after graduation. John Hession photo.

Meeting a Need
The launch of the nursing program responds to the growing need for more nurses, prompted by an aging population in need of care and a large number of nursing professionals reaching retirement age. According to the New Hampshire Economic and Labor Market Information Bureau, registered nurses are among the top of the list of occupations with the most projected openings. As of 2010, there were 613 openings annually in New Hampshire with a 31 percent increase projected over the 10-year period between 2006 and 2016. That represents an additional 4,000 nurses needed by 2016.

The demand for baccalaureate-educated nurses is also growing. With advances in medicine and technology enabling people to live longer, and health care delivery becoming more complex, the IOM has called for the percentage of nurses who hold BSN degrees to increase to 80 percent by the year 2020. In 2008, only 27 percent of New Hampshire’s nursing workforce held baccalaureate degrees.

The IOM’s recommendation comes as no surprise to Speare Memorial Hospital President and CEO Michelle McEwen ’81. “The role of nurses has changed dramatically over the years,” she says. “They used to be a support function to the physician, but now nurses are crucial members of the care team—their responsibilities have increased exponentially. They require more critical thinking skills, more patient education skills … we need to have more baccalaureate-prepared nurses to meet this expanded role.”

A bachelor of science in nursing does more than prepare nurses for the increased demands of the profession, notes Bantell. 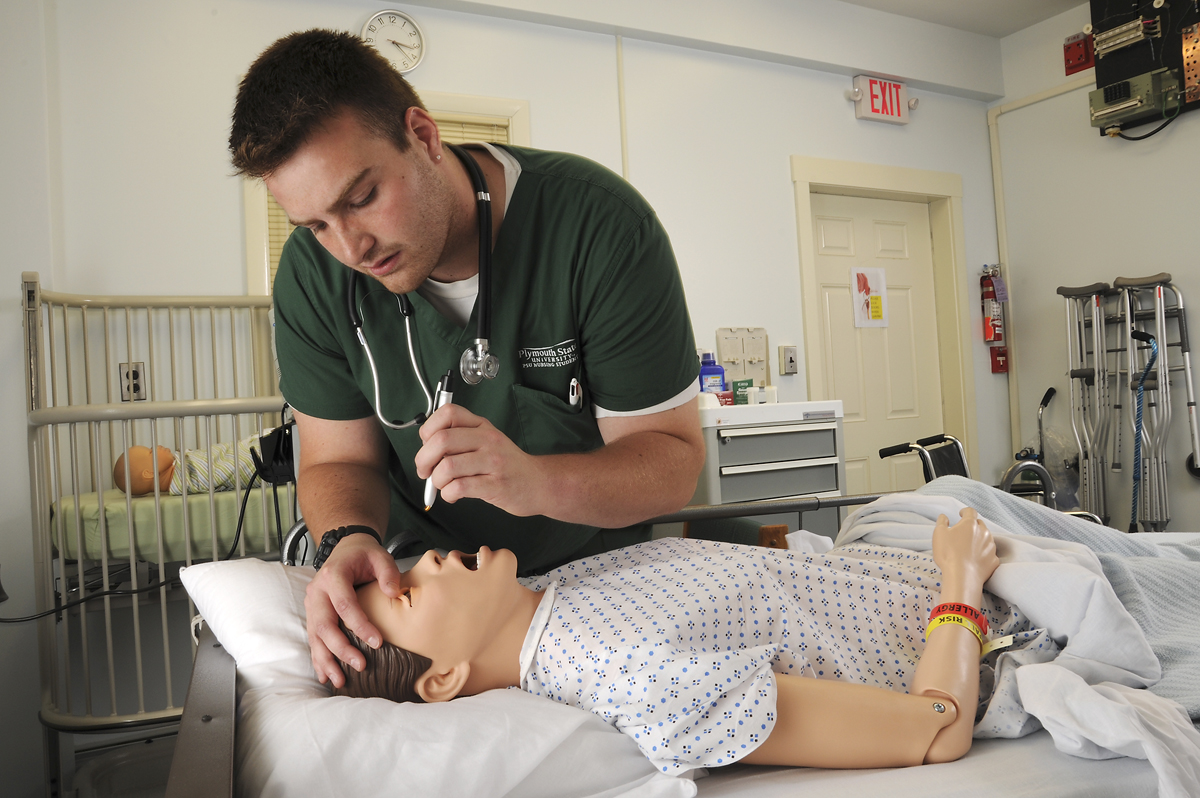 “It also gives nurses a greater return on salary and provides them with more opportunities in the job market and in graduate education.”

More opportunities are exactly what Nathalie Strickrott is hoping for when she graduates from PSU’s nursing program. The 47-year-old mother of two has been a respiratory therapist for 14 years. “I love my job, but I’m looking for more options,” she says. “As a nurse, you can work in a variety of settings: a school, a doctor’s office, or in various departments within a hospital, and you care for a variety of patients with different health issues.”

While Strickrott, a resident of Gilford, considers it “a privilege” to be part of the inaugural nursing class at PSU, she admits to being daunted by the prospect of  juggling work, family, and school. Fortunately, she’s got support on all fronts. “My husband was all for my enrolling in the program, and he holds down the fort at home when I’m not there,” she says. And while her 8-year-old daughter is still adjusting to mom’s new schedule, Strickrott’s employer, Lakes Region General Hospital in Laconia, has been very supportive. “They’re doing tuition reimbursement and helping me with my schedule; my co-workers have even changed their schedules to help accommodate mine, and I’m so appreciative of that.”

Strickrott also appreciates the support and encouragement she’s received from Bantell and the rest of the nursing faculty. “They have said to me, ‘We’re here to help you succeed. If you need anything, come see us.” 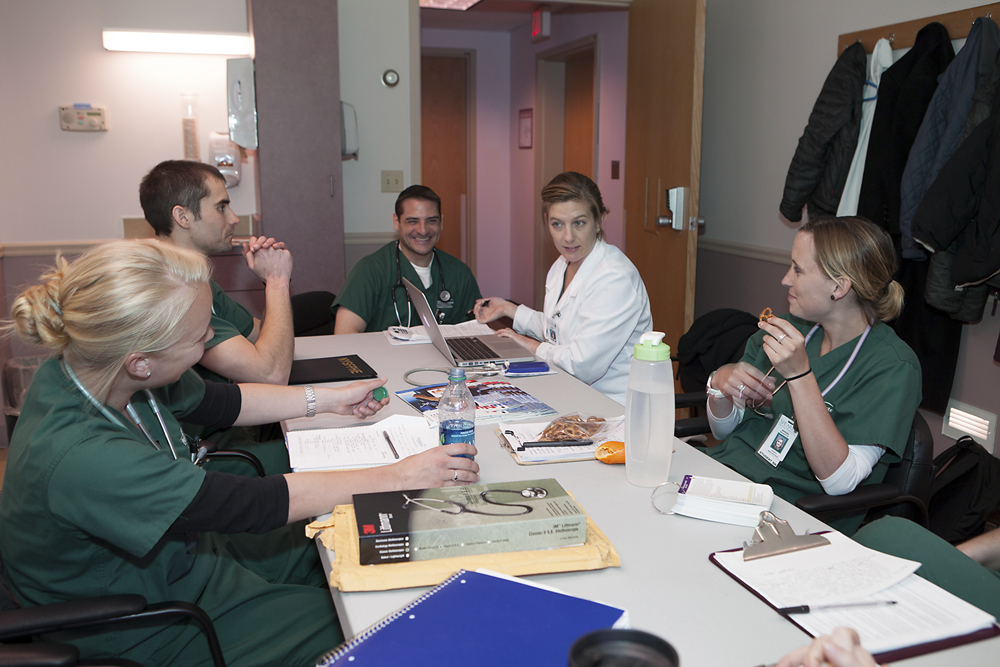 Nurses of the Future
“We have a very eclectic student body, and we want them all to feel comfortable in the program,” says Bantell. “We have students with multiple degrees, master’s degrees, and some of them are on their second or third career. One of our students has an art degree, another a music degree—these kinds of backgrounds can have a positive impact on patient outcomes.”

Eissler appreciates his classmates’ diverse backgrounds and especially enjoys it when those who have experience in patient care share their stories. “Just hearing about their experiences, the kinds of patients they’ve had, the kinds of situations they’ve been in—it gives you an idea of what to expect. I like hearing what they have to say.”

In March, both Eissler and Strickrott began their clinical rotations at Littleton General Hospital and Speare Memorial Hospital, respectively. Over the course of their nursing education, students will rotate through different health care facilities around the state, including Dartmouth-Hitchcock Medical Center in Lebanon, Golden View Health Care Center in Meredith, Cottage Hospital in Woodsville, and Concord Hospital, to get as many practical experiences as possible. In developing these partnerships with area health care providers, Bantell says, “the nurses and administrators I’ve talked with say they’re looking forward to many of their nurses enrolling in the program.”

For Eissler, who couldn’t wait to transition from practicing nursing procedures on the mannequins in the Simulation Laboratory to caring for real patients in a real hospital setting, his clinical experience “is exciting—I’m on the medical/surgical floor and have the opportunity to assess vital signs, evaluate a patient’s pain level, administer medications, and really care for patients on a personal level.”

While patient care is far from new to Strickrott, she too is enjoying her clinicals. “We are having the time of our lives. Everyone at Speare, from the housekeepers to the doctors, is so receptive and helpful to us.”

It’s not just the student nurses who benefit from clinical experiences, McEwen points out. Preceptors and health care facilities do, too. “Mentoring a student can be an enriching professional experience for nurses, giving them an opportunity to share what they’ve learned in their careers and help a student succeed,” she says. “It also makes it easier for hospitals and other health care facilities to recruit nurses that have done their training in the community: the recruits know the community and the facility because they’ve already done rotations there. And the hiring organization knows the candidates because they had that early introduction. Hospitals that have BSN programs in their backyard tend to have better results from recruitment.”

For Bantell, it’s the benefits to the community that give her the greatest personal satisfaction. “We’ll be graduating approximately 40 students every sequence, and they will go out and help improve the health and lives of people,” she says. “That’s what nursing is all about.” 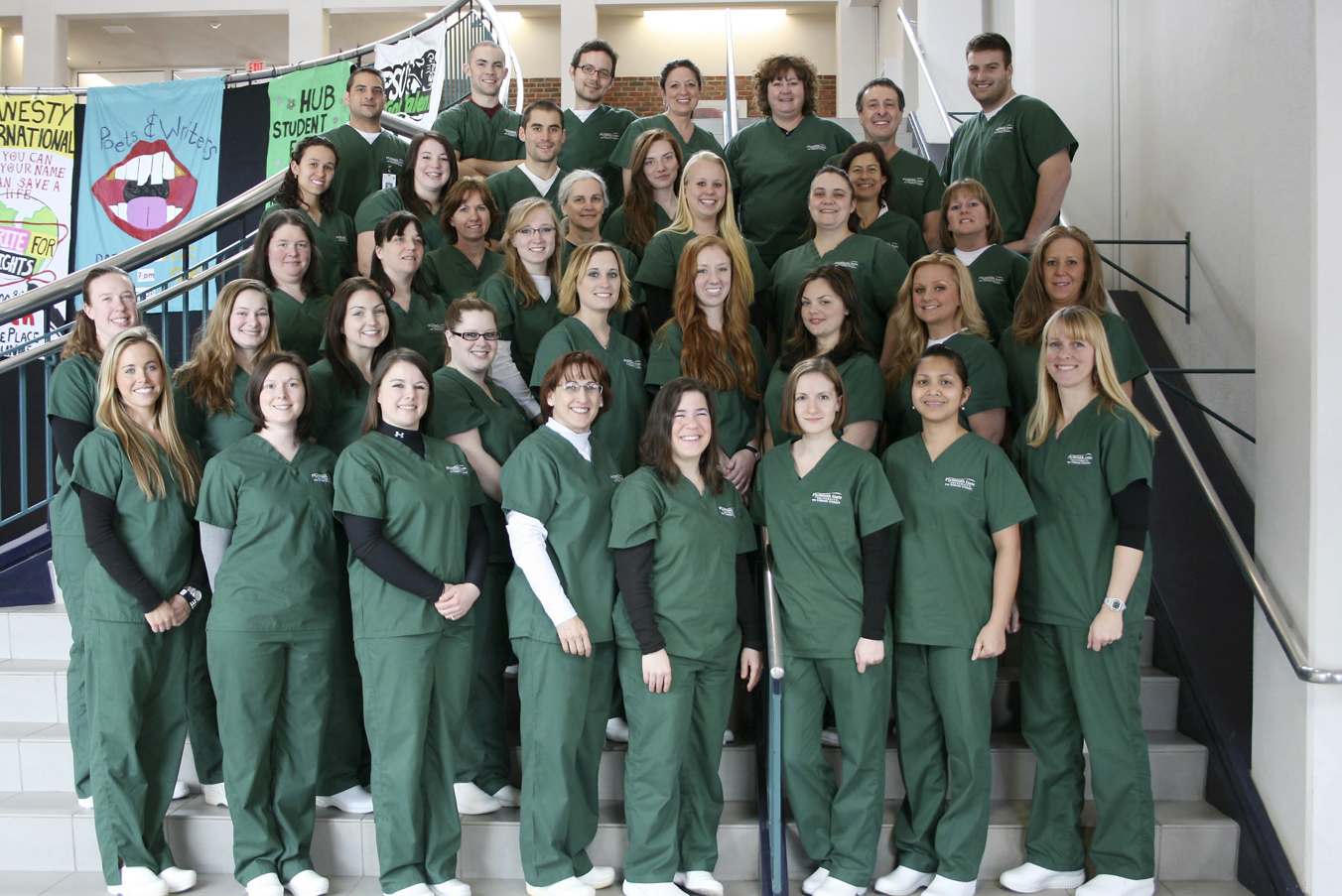 PSU's first nursing class, which will have the opportunity to collaborate with students in the graphic design program to create a nursing program pin. They'll receive the pins at a pinning ceremony, a rite of passage in nursing education that will celebrate their transition from student to nurse. Staff photo.

An Archaeological Survey of Inveruglas Farm: A Search for Clan MacFarlane David R. Starbuck, professor of anthropology and sociology From...
Copyright 2019 Plymouth State University
Back to top