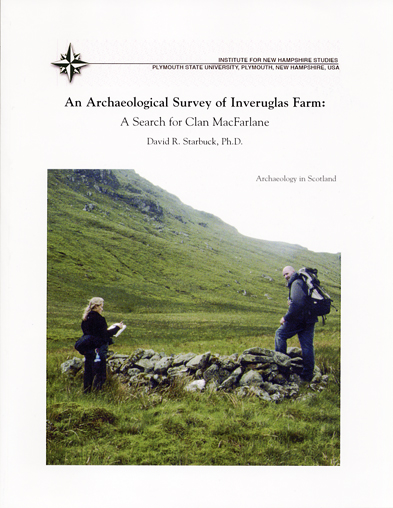 An Archaeological Survey of Inveruglas Farm: A Search for Clan MacFarlane
David R. Starbuck, professor of anthropology and sociology

From 2000 to 2004, author and principal investigator David Starbuck led a team of students and volunteers in an archaeological survey of the medieval-era Inveruglas Farm near Loch Lomond, Scotland. Starbuck, who has a lifelong familial interest in Scotland, believes the sites on the farm are highly representative of medieval or later rural settlements in the area. His book, which includes nearly 150 photos and illustrations, walks readers through foundations, cattle and sheep pens, corn-drying kilns, and other evidence of settlements, gradually painting a picture of a medieval agricultural community that included permanent, year-round residences as well as temporary summer shelters (shielings) in higher grounds. Ultimately, this survey provides archaeologists and historians with significant preliminary information about the past on Loch Lomond, and paves the way for researchers to pursue the study and preservation of sites from medieval and post-medieval Scotland, seeking, in particular, changing architectural or cultural trends.

Rebels in Society: The Perils of Adolescence
Marcel Lebrun, chair of the Department of Education and professor of curriculum and instruction

Jam-packed with statistics, stories, and case studies, Marcel Lebrun’s latest publication about young people at risk challenges every reader to step up and take action. After one particularly heart-rending string of statistics—child poverty, children at risk of going to prison, inadequate education—Lebrun writes, “Now that I have completely shattered any of your ideals about American society and how it treats its youngest participants, it is important to remember that we are not helpless, we can effect change … We can begin one child at a time.”

By presenting the risks of childhood and adolescence in exacting detail, Lebrun offers the adults who love and work with young people a starting point to guide their charges through the perils of growing up. He presents solutions ranging from prevention to treatment programs to family and community involvement. Lebrun has over 30 years of experience in public school teaching, special education, and clinical mental health counseling, and has published several books on issues of children in crisis.

Before planes, before trains, before automobiles … even before the wheel, skiing was a legitimate mode of transportation. As a sport, though, skiing only entered the arena about 150 years ago. E. John B. Allen, who has published eight books about skiing, makes his ninth contribution with the comprehensive Historical Dictionary of Skiing. From A to Z, in detailed, cross-referenced entries, readers learn about alpine, Nordic, speed, distance, jumping, and sprint skiing; athletes; the Olympics; governance; and skiing’s place in the context of a changing world. The book offers a complete chronology of skiing as well as an introductory essay.

Two girls, a truck, a map … and a stolen horse. The perfect ingredients for a road trip! Teens Hattie and Delores break away from their New Hampshire town early one morning, ostensibly to save a beloved old horse from being put down by his owners before the hard winter. They are in search of western land where Speed (the horse) can range free for his remaining years. Along the way, though, the two friends slowly come to terms with the deeper reasons they each have for putting distance between themselves and home. They bicker, tell stories, alternately ignore and respond to frantic cell phone messages from their families, and meet characters even Jack Kerouac would have enjoyed. Joseph Monninger has written several nonfiction books and more than a dozen novels, including Wish, Baby, and Hippie Chick.

Professor of Social Work Stephen Gorin has earned regional and national recognition for his expertise in social welfare policy....
Copyright 2019 Plymouth State University
Back to top