Tom and Liz Kelsey are not New Hampshire natives, and neither attended Plymouth State. But their roots in the Lakes Region run deep: As a boy, Tom spent summers on Squam Lake with his family and he later attended Dartmouth College. Those experiences made New Hampshire a part of his being.

Tom and Liz met, married, settled in New Jersey, and soon started a family. Wanting their three children to experience life beyond the surroundings of their New Jersey home, the Kelseys took them to Squam. Ten summers at the Rockywold-Deephaven Camps in Holderness led to the 1980 purchase of a small lakeshore property followed by more than three decades of wonderful, summer memories.

Several years ago Tom and Liz retired and are now full-time NH residents. They spend summers on Squam in a new home they built while their grown children and their families come and go, staying at the original cottage; through that New Hampshire has become an important part of the lives of the next two generations.

The Kelseys care deeply about their adopted state. After a 1997 visit to Gorham where they learned about the socio-economic challenges of the North Country, they knew they wanted to help. They began supporting organizations that provide resources and education to North Country families. “We feel blessed by what we’ve been given, by what we have, and we wanted to give back,” says Liz. “And the North Country needed help.”

The Kelseys became acquainted with Plymouth State through their connection to Squam Lake. They attended events on campus, met members of the PSU community, and came to appreciate PSU’s important role in the region. “Plymouth State has a strong legacy, but has not rested on its laurels,” says Tom. “It offers programs that are oriented to careers that are viable in the North Country; it has an incubator that helps create business opportunities, outstanding facilities, athletics, and more. PSU offers much to students at a reasonable price; however, we recognize that it may be beyond the means of some, and affording college is a real barrier for those students.”

“Being NH residents is a wonderful way to spend our retirement years,” say Liz and Tom. “We are very pleased to have the opportunity to support to PSU and hope that others may be inspired to do the same.” 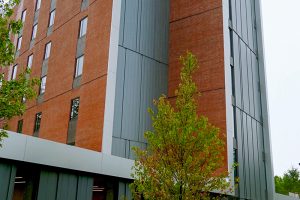 PSU’s continued move toward full implementation of the integrated clusters and open labs model took a leap forward as the first...
Copyright 2019 Plymouth State University
Back to top