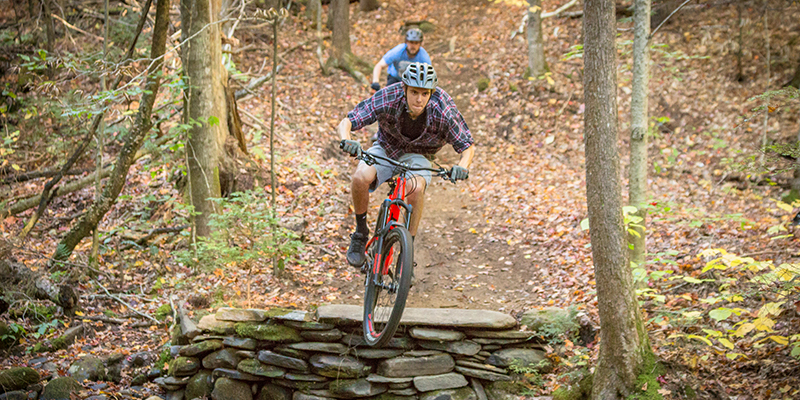 Whether you are a prospective student, current student, or alumnus, the mountains surrounding Plymouth State will always have a special meaning. What if I told you there was a resurgence happening within those mountains?

That resurgence is mountain biking. A sport that always served a niche group of people has now taken the northeast by storm. Trail centers are sprouting up, grassroots programs are inviting even the most daring, and entire mountains are dedicated to lift service riding. Mountain biking is back, and here to stay.

“With numbers expected to double next year, the Mountain Bike Club will soon be one of the largest sport clubs on campus.”
So where does Plymouth State fall into all of this? With Plymouth’s central location, riding is just a stone’s throw away. Six trail centers are within a short ride from campus, and whether you want to go out for a quick spin in Fox Park, a trail ride in Holderness, or hit the drops and jumps of Highland Mountain Bike Park, there is terrain for all abilities.

The Mountain Bike Club plays a large role in the local riding scene. With a nationally ranked dedicated downhill team, we know our way around a bike. The team is made up of six full-time racers in the disciplines of Enduro, Downhill, and Cross Country. The team races in the Eastern Collegiate Cycling Conference during the fall; following the circuit for seven weeks, we travel from Maine to Pennsylvania. For the past three years we have also competed in the Collegiate National Championship in Missoula, Montana. 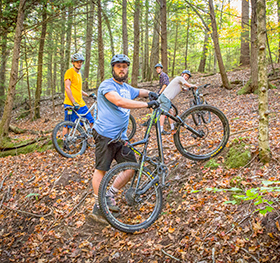 The club is led by President Ben Manning. Ben is a junior at Plymouth State majoring in strategic marketing with a minor in pre-law. Ben joined the club when he was a freshman and took the reins as a sophomore. Second in command is treasurer and vice president, Brandon McGirl. Brandon is a senior majoring in accounting and finance with a focus in pre-med. Brandon joined the club as a freshman and took the role as treasurer and VP as a junior.

When asked how the club has changed over the past two years Ben had this to say: “Our race side of the club was solid, but we were lacking a key user group of everyone who didn’t race. We decided to shift the focus from just racing, to riders of all ability levels. This change tripled the number of people involved and created a more profitable organization.”

The club has seen a lot of new faces, both racers and recreational riders. With numbers expected to double next year, the Mountain Bike Club will soon be one of the largest sport clubs on campus.

Right now, there is not much riding to be had, but you can catch the club on the slopes of either Cannon or Loon Mountain. Follow us on social media to stay tuned to latest events, check back to The Panther Posts for more on the Mountain Bike Club, and always remember, PEDAL! 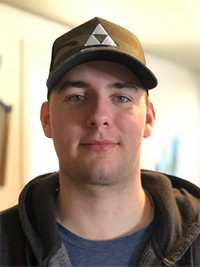 Ben Manning ’19 is a third year at Plymouth State from Cumberland Center, Maine. Ben has been working in the outdoor industry for the past five years now. He has a grasp on what is takes to run a high functioning organization. Ben looks for every opportunity to grow the club and move it in a positive direction. Ben also took a top thirty finish at Collegiate Nationals in the fall.