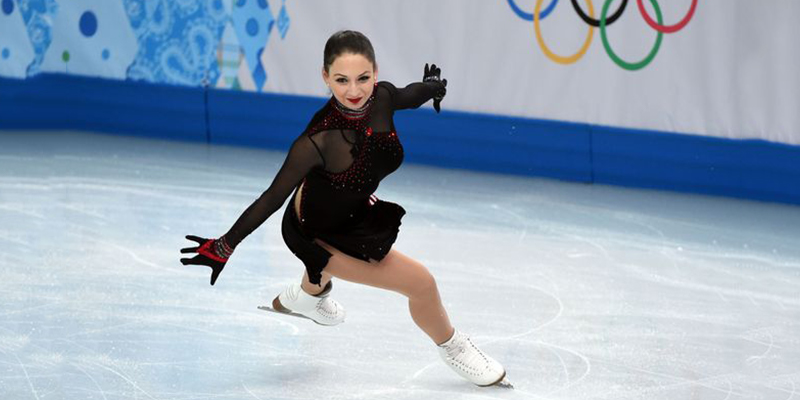 Over the 15 years of my career as a professional figure skater I have competed in almost every world and European championship. I have also competed in three Olympic games: Torino 2006, Vancouver 2010, and Sochi 2014. My experiences have been a little different at each event, but they all have special meaning. However, my first experience performing was probably the most memorable.

I was young for the games in Torino and, to be completely honest, I didn’t understand what it meant to be there until I had arrived. Surprisingly, I was very calm during my first performance. I wasn’t too nervous, which was strange considering that I was at the Olympics! I skated very well and placed sixth in the short program. This meant that for the long program I would be skating in the last and strongest warm-up group.

“I realized that I had wanted to be like these girls for most of my life and, at that moment, I was one of them. My tears changed into a smile because I knew I had earned the right to be there and was staying.”

The next day, I was on the ice practicing with the top skaters in the world, including Sasha Cohen, Shizuka Arakava, and Irina Slutskaya. That was when it hit me all at once: these women were the idols I looked up to as an aspiring skater and I was skating with them! I became so overwhelmed with so many different emotions that I just started crying.

I went to my coach at the time, Elena Buianova, and said that I didn’t know how to skate with these girls (and actually may have forgotten how to skate altogether). She said, “You better learn and fast, you are in this spot for a reason, you sure wouldn’t be here if you didn’t have it in you. So get used to it, and fast.” She said that I had to decide whether I was going to swim with these girls or drown.

I skated away and realized I had to decide what kind of athlete I wanted to be. I looked around and suddenly something clicked in my head: I realized that I had wanted to be like these girls for most of my life and, at that moment, I was one of them. My tears changed into a smile because I knew I had earned the right to be there and was staying. 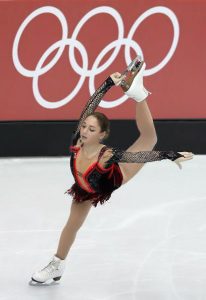 The pressure of the Olympics is tiring, both physically and emotionally. It’s impossible to prepare for everything and sometimes the challenges are difficult to overcome. Based on my experience my advice to future Olympians, or to anyone for that matter, would be to face the challenges with an attitude of acceptance; it is all part of an athlete’s journey. The good, the bad, and the ugly are all a part of the dream that brought you there. It is important for athletes to remind themselves why they are there, of all the things they’ve done to get there, and the sacrifices they’ve made along the way. Last, but not least, it’s important for athletes to remind themselves of all the reasons why they deserve to be there.

I am very fortunate to have an amazing family that has supported me every step of the way. I had a rich skating career, and it’s always going to be a part of me. However, I am very happy to move on to the next chapter of my life at Plymouth State University.

Before coming here I was living a very different life. After being out of school for many years I was worried that I wouldn’t be able to adjust and keep up with school. But my past experiences as an athlete have taught me that if I want something I have to work hard to earn it. It taught me to look at the obstacles as a part of the journey that will bring me to where I want to be. Amazing teachers, faculty, and everyone I’ve met at Plymouth State are helping me every step of the way down my new path. I am very grateful that I chose to attend Plymouth State and I am excited to see what comes next. 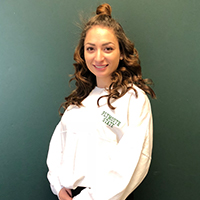 Elene Gedevanishvili ’19 was born and spent most of her childhood in Tbilisi, Georgia. In 1999, she moved to Moscow with her mom and began training at the age of 8. Soon after competing in the 2006 Olympic games she was obliged to leave Moscow due to political conflicts between Russia and Georgia. During this time, many Georgian citizens were mistreated and deported, her mother was one of them. She is the recipient of The Order of Honor given by the President of Georgia for her athletic achievements. After leaving Russia she moved to New Jersey where she continued her training. She became a U.S citizen in 2013 and considers the United States her home. In 2015, Elene suffered from an injury and during her time off the ice decided to visit her brother at Plymouth State. This visit led her to enroll in the Fall of 2016. Elene is a third-year Interdisciplinary major, currently modifying her program towards Sports Medicine. Post-graduation she plans to work with athlete nutrition, injury prevention, and post rehabilitation strengthening. Off the ice you’ll find Elene cooking, dancing, skiing, snowboarding, and playing hockey!