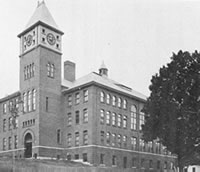 Plymouth State University evolved from Holmes Plymouth Academy, which dates back to 1808 as a pioneer institution for teacher training. As early as 1836, the Reverend Charles Brooks lectured before the Legislature of New Hampshire and throughout the state on the subject of normal schools. An “act for the establishment and management of a state normal school for the better training of teachers” was passed in 1870.

The board of trustees located the New Hampshire State Normal School in Plymouth in 1871; the town of Plymouth had offered the Holmes Plymouth Academy and other support to the new school. In 1874, at least 20 years before the system was attempted in any other normal school in the country, the grade and high schools of Plymouth had been organized as training schools under the supervision of the normal school. A new school building (Rounds Hall) and a new dormitory were built in 1890.

In 1911, Dr. Ernest L. Silver, with experience as a superintendent of schools and as principal of Pinkerton Academy, began a 35-year administration of the school, which saw the school grow to maturity, both professionally and physically. Poet laureate Robert Frost, who taught in Rounds Hall and lived on campus from 1911 through 1912, wrote of Dr. Silver on the occasion of the 75th anniversary of the institution and the 35th year of Dr. Silver’s presidency in 1946: “We all owe Mr. Silver a debt of gratitude for the large and liberal way he encouraged our individualities both as teachers and students under him. I went to Plymouth with him when he began his presidency and I have kept up friendly interest in the whole 35 years of his unusually long administration. It warms the heart with reassurance to look on at anything that persists so successfully in this world of broken pieces.”

In 1927, the American Council of Teacher Colleges evaluated Plymouth Normal School and rated it a Grade A teachers college—a rating it has held ever since. In 1939, New Hampshire’s state Legislature officially recognized the increased stature of the institution by changing its designation to Plymouth Teachers College and, in 1963, to Plymouth State College of the University System of New Hampshire. In 1948, the College offered its first graduate degrees. In 2003, the state Legislature changed the institution’s name to Plymouth State University in recognition of the range and depth of its programming. 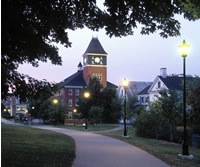 [Learn more about our history by visiting the Spinelli Archives at Plymouth State University.]
Back to top