WAYFINDING: MAPS OF THE WHITE MOUNTAINS 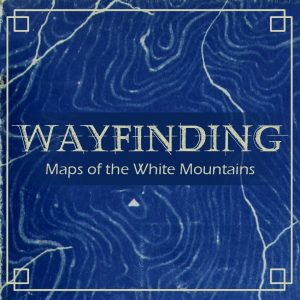 Wayfinding: Maps of the White Mountains features maps from the far and recent past, as well as  map tools for today’s hikers, tourists, scientists, weekend explorers, and enthusiasts. The exhibition illustrates two broad historical themes. First, we see the development of surveying and mapping technology from the 18th century to the present, as it has been applied to the White Mountains. Second, we see the changing purposes and uses of maps in this region, as the culture, politics, and the economy have changed over nearly four centuries.

As the story of White Mountain maps progresses, we see the tremendous variety of maps, not just by type of map, but also by the range of aesthetic choices by the mapmakers, even for a given type of map, and even during relatively short periods of time. Each map describes specific places and routes, and also tells a story of the knowledge, curiosity, purposes, pleasures, and design ideas of its time. This gives the White Mountains one of the richest cartographic histories of any single mountain region in the world.

Click here to learn more about the co-curator, Adam Apt

Adam Apt, a native of Belmont, Massachusetts, lives in Cambridge, Mass., where he is the proprietor of Peabody River Asset Management, LLC, a registered investment advisor. He holds a BA in astronomy from Amherst College, a doctorate in the history of science from the University of Oxford, and an MBA from the University of Chicago.

Apart from a couple of hikes when he was at summer camp, his serious hiking in the White Mountains began in 1991, and he has solo-hiked the New England Hundred Highest and the Adirondack Forty-Sixers. In winter, however, he has hiked only about a quarter of the 4000-footers of the White Mountains (not all solo). His White Mountain collection consists primarily of books and other works on paper, including manuscripts and photographs, and especially maps, about which he has published a few articles. His White Mountain stereoviews, including some on glass, number about 1500. He has contributed text to the whitemountainhistory.org web site, and in 2006, he was guest curator of an exhibition of White Mountain Maps at the Harvard Map Collection.

Thanks to the many wonderful supporters of this exhibition! 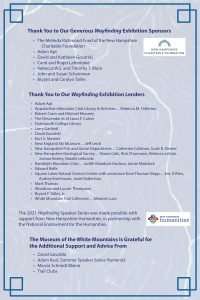 Accompanying this exhibition is a special series of related lectures and presentations. The 2021 Summer Speaker Series project was made possible with support from New Hampshire Humanities, in partnership with the National Endowment for the Humanities. Learn more at www.nhhumanities.org.

Rick Chormann, retired State Geologist and Director of the New Hampshire Geological Survey provides an introduction to LiDAR technology. A true believer in the potential of LiDAR to revolutionize geologic mapping and digital terrain analysis, Rick will give an overview of it how it works and its numerous applications, including a segment on stone walls as landforms, their place in NH history, and the NH Stone Wall Mapping project.

This presentation was not recorded at the request of the speakers.

The Map is not the Territory: The Limitations and Power of Mapping
Presented by Adam Keul
July 6, 2021 at 7pm

Whether a map’s purpose is to locate a food source, to display a territory ripe for exploitation to a faraway monarch, or to determine the name of a great ski run, the transmission of spatial knowledge is a universal human art. Explore how issues of inequality and access are involved/addressed in historic and contemporary mapping. Presented by Adam Keul, director for Tourism Management & Policy at Plymouth State University.

David Govatski presents the story of Raised Relief maps, 3D representations of a portion of the Earth’s surface. Learn about the history of relief maps in our region, starting with the 1872 George Snow Relief Map of the White Mountains and other early maps, to the unique process developed by the A.M.C. in 1931, to the raised relief maps produced by the Civilian Conservation Corps.

Climbing all the 4000 footer’s in NH is a goal for many hikers in the Granite State. Learn how an interest in hiking, orienteering, map making, and teaching topography led retired middle school science teacher, Mark Thomas, to create a collection of painted 3D models of all the 48 mountains. Plus, enjoy a demonstration of how these unique 3D models are made!

Wayfinding in Their Own Words: Historical Journals, Maps and Hikers of the White Mountains
Presented by Becky Fullerton
July 27, 2021 at 7pm

Have you ever tried to retrace the steps of an explorer from before your time or used an old map to guide you around a modern landscape? In this presentation by AMC Archivist, Becky Fullerton, see the White Mountains through early 20th century hiker journal excerpts, historical and contemporary photos, and maps. Explore in words and pictures how wayfinding and backpacking have and have not changed over the course of a century or more.

Digital Cartography: How does recent technology impact our historical understanding of the White Mountains?
Presented by Larry Garland
August 4, 2021 at 7pm

The digital age has ‘opened our eyes’ to a spatial realm that can render and reimagine in ways that defy our predecessors. Larry Garland, who established AMC’s digital cartography program in 1996 and has served as staff cartographer ever since, tells the story of how satellite and aerial imagery, GPS, Lidar, 3D terrain models, and crowdsourcing on social media have reshaped our world – or at least our understanding of it.

Many of us have no idea what do wild animals do every day, but there are stories hidden in the natural communities around us waiting to be discovered. Squam Lakes Natural Science Center developed the Hidden Stories project to reveal these stories on its 200 acre campus. Join Naturalist Eric D’Aleo to see the amazing images captured and the patterns revealed through mapping, and learn ways you can use this technology in your own backyard.

In the 19th century, the White Mountain National Forest was owned by an ever-changing cast of characters. In the 1850s, two different surveyors were hired to resolve contention over land ownership boundaries in the area – surveys that led to three NH Supreme Court cases. This talk by Rebecca Weeks Sherill More, Ph.D. focuses on the complex role surveyors’ maps have played in landownership in the White Mountain region from the colonial era to today.

Woody Thompson will draw upon his 30 years of field work in the White Mountains to explain how geologic mapping has been used to unravel the Ice Age geology of northern New Hampshire.  He will discuss the use of topographic maps, aerial photographs, and recent laser imaging of the Earth’s surface (LiDAR) to better understand the regional geology.

This presentation was not recorded at the request of the speaker.