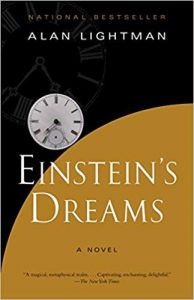 A modern classic, Einstein’s Dreams is a fictional collage of stories dreamed by Albert Einstein in 1905, when he worked in a patent office in Switzerland. As the defiant but sensitive young genius is creating his theory of relativity, a new conception of time, he imagines many possible worlds. In one, time is circular, so that people are fated to repeat triumphs and failures over and over. In another, there is a place where time stands still, visited by lovers and parents clinging to their children. In another, time is a nightingale, sometimes trapped by a bell jar.

Einstein’s Dreams has inspired playwrights, dancers, musicians, and painters all over the world exploring the connections between science and art, the process of creativity, and ultimately the fragility of human existence. 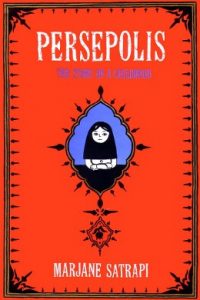 Persepolis: The Story of a Childhood by Marjane Satrapi:

Wise, funny, and heartbreaking, Persepolis is Marjane Satrapi’s memoir of growing up in Iran during the Islamic Revolution. In powerful black-and-white comic strip images, Satrapi tells the story of her life in Tehran from ages six to fourteen, years that saw the overthrow of the Shah’s regime, the triumph of the Islamic Revolution, and the devastating effects of war with Iraq. The intelligent and outspoken only child of committed Marxists and the great-granddaughter of one of Iran’s last emperors, Marjane bears witness to a childhood uniquely entwined with the history of her country.

Persepolis paints an unforgettable portrait of daily life in Iran and of the bewildering contradictions between home life and public life. Marjane’s child’s-eye view of dethroned emperors, state-sanctioned whippings, and heroes of the revolution allows us to learn as she does the history of this fascinating country and of her own extraordinary family. Intensely personal, profoundly political, and wholly original, Persepolis is at once a story of growing up and a reminder of the human cost of war and political repression. It shows how we carry on, with laughter and tears, in the face of absurdity. And, finally, it introduces us to an irresistible little girl with whom we cannot help but fall in love. 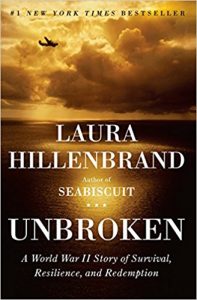 In boyhood, Louis Zamperini was an incorrigible delinquent. As a teenager, he channeled his defiance into running, discovering a prodigious talent that had carried him to the Berlin Olympics. But when World War II began, the athlete became an airman, embarking on a journey that led to a doomed flight on a May afternoon in 1943. When his Army Air Forces bomber crashed into the Pacific Ocean, against all odds, Zamperini survived, adrift on a foundering life raft. Ahead of Zamperini lay thousands of miles of open ocean, leaping sharks, thirst and starvation, enemy aircraft, and, beyond, a trial even greater. Driven to the limits of endurance, Zamperini would answer desperation with ingenuity; suffering with hope, resolve, and humor; brutality with rebellion. His fate, whether triumph or tragedy, would be suspended on the fraying wire of his will. 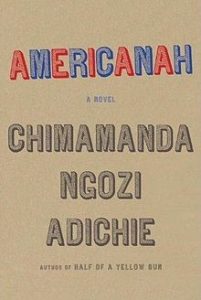 Nominated as one of America’s best-loved novels by PBS’s The Great American Read. Ifemelu and Obinze are young and in love when they depart military-ruled Nigeria for the West. Beautiful, self-assured Ifemelu heads for America, where despite her academic success, she is forced to grapple with what it means to be black for the first time. Quiet, thoughtful Obinze had hoped to join her, but with post-9/11 America closed to him, he instead plunges into a dangerous, undocumented life in London. Fifteen years later, they reunite in a newly democratic Nigeria, and reignite their passion—for each other and for their homeland. 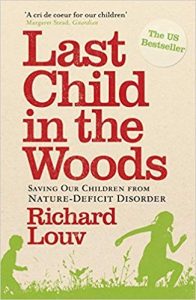 Last Child in the Woods by Richard Louv:

In this influential work about the staggering divide between children and the outdoors, child advocacy expert Richard Louv directly links the lack of nature in the lives of today’s wired generation—he calls it nature-deficit—to some of the most disturbing childhood trends, such as the rises in obesity, attention disorders, and depression.

Last Child in the Woods is the first book to bring together a new and growing body of research indicating that direct exposure to nature is essential for healthy childhood development and for the physical and emotional health of children and adults. More than just raising an alarm, Louv offers practical solutions and simple ways to heal the broken bond—and many are right in our own backyard.

Patrick May, Associate Professor of Tourism, Environment, and Sustainable Development

The Curious Incidents of the Dog in the Nighttime by Mark Haddon:

A bestselling modern classic—both poignant and funny—about a boy with autism who sets out to solve the murder of a neighbor’s dog and discovers unexpected truths about himself and the world. Nominated as one of America’s best-loved novels by PBS’s The Great American Read Christopher John Francis Boone knows all the countries of the world and their capitals and every prime number up to 7,057. He relates well to animals but has no understanding of human emotions. He cannot stand to be touched. And he detests the color yellow.

This improbable story of Christopher’s quest to investigate the suspicious death of a neighborhood dog makes for one of the most captivating, unusual, and widely heralded novels in recent years.

Although gifted with a superbly logical brain, for fifteen-year-old Christopher everyday interactions and admonishments have little meaning. He lives on patterns, rules, and a diagram kept in his pocket. Then one day, a neighbor’s dog, Wellington, is killed and his carefully constructive universe is threatened. Christopher sets out to solve the murder in the style of his favourite (logical) detective, Sherlock Holmes. What follows makes for a novel that is funny, poignant and fascinating in its portrayal of a person whose curse and blessing are a mind that perceives the world entirely literally. 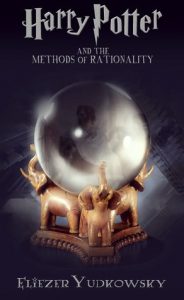 Harry Potter and the Methods of Rationality by Eliezer Yudowsky:

Free online at http://www.hpmor.com/ Harry Potter and the Methods of Rationality is a work of alternate-universe Harry Potter fan-fiction wherein Petunia Evans has married an Oxford biochemistry professor and young genius Harry grows up fascinated by science and science fiction. When he finds out that he is a wizard, he tries to apply scientific principles to his study of magic, with sometimes surprising results.

HPMOR examines the system of magic of the Harry Potter series through the lens of science and rationality. 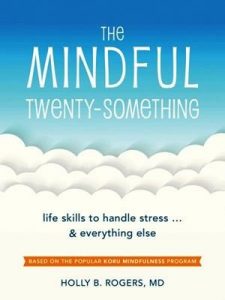 The Mindful Twenty-Something by Holly Rogers:

In The Mindful Twenty-Something, the cofounder of the extremely popular Koru Mindfulness program developed at Duke University presents a unique, evidence-based approach to help you make important life decisions with clarity and confidence.

As a twenty-something, you may feel like you are being pulled in dozen different directions. With the daily tumult, busyness, and major life changes you experience as a young adult, you may also be particularly vulnerable to stress and its negative effects. Emerging adulthood, which occurs between the ages of 18 and 29, is a developmental stage of life when you’re faced with important decisions about school, relationships, sex, your career, and more. With so much going on, you need a guide to help you navigate with less stress and more ease.

This mindful guide offers a unique approach for navigating your twenties with clarity and confidence. You’ll learn to tackle stress, gain a healthier perspective, get in touch with what really matters to you, and make important life decisions guided by self-knowledge and understanding. Most importantly, you’ll discover mindfulness techniques to manage life’s day-today challenges from a calm, balanced center—a useful skill at any age.